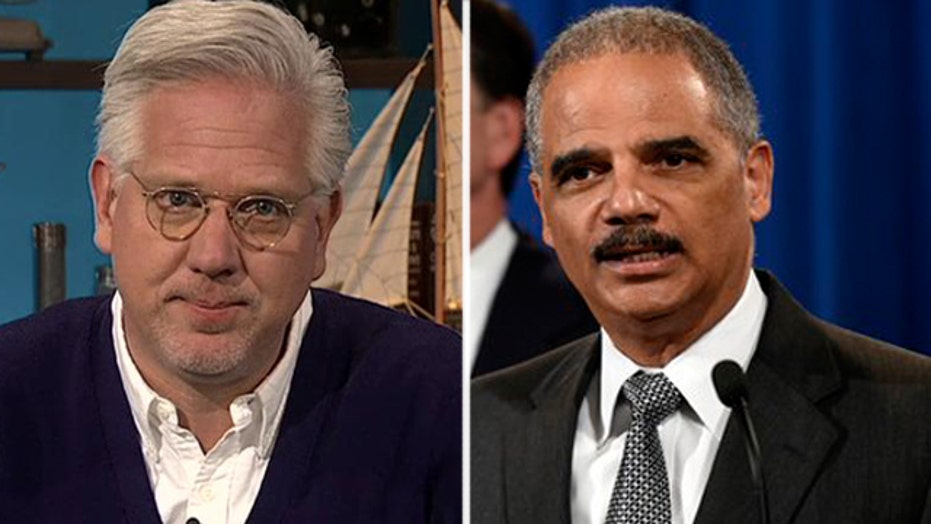 This is a rush transcript from "The Kelly File," July 16, 2014. This copy may not be in its final form and may be updated.

ERIC HOLDER, ATTORNEY GENERAL: There's a certain level of vehemence it seems to me that's directed at me, directed at the president. You know, people talk about taking their country back.

There's a certain racial component to this for some people. I don't think that's the main driver, but for some there's a racial animus.

MEGYN KELLY, HOST: Well, that was Attorney General Eric Holder speaking to ABC News over the weekend, suggesting some of the president's critics are just motivated by race. Earlier I asked Glenn Beck for his take on that.

GLENN BECK, RADIO TALK SHOW HOST: I am so deeply saddened by Eric Holder in the way he views his own office. He hasn't investigated the things that should be investigated. He's playing pure partisan politics here. This is the kind of thing that I'm talking about where, let's not be divisive any more. Let's not be divisive any more. For people to say that it's racist because we disagree with somebody's policies is nonsense. If you are judging a man by the content of his character, it's not racism and by looking at the pattern of Eric Holder's character, I can tell you that he's not a guy that views his office with a high regard to justice.

KELLY: Do you think he's the hand of the king?

BECK: Yes, I do. I think he is some -- there's -- have you ever seen anybody get away with as much stuff or let the other side get away with as much stuff? I've never seen that in American politics. I've never seen investigation after investigation after investigation. They're still not looking into the FBI. Nobody has talked to the Tea Party group in Houston, True the Vote, nobody has talked to them in 15 months from the Justice Department. Now how does that happen?

KELLY: And, you know, with all due respect to my colleague at ABC News who interviewed Mr. Holder, they didn't even touch on the IRS, Glenn. It's so rare to get the attorney general in an interview, and I said many times that that would be my number one, my number one person in the world I would like to interview, is Eric Holder.

BECK: I would cuddle up with a gallon of Ben and Jerry's to watch that. I would love that.

KELLY: Save me some Cherry Garcia.

KELLY: But he's got him there and he didn't ask him about the IRS controversy plan. I mean, it's a dereliction once the President declare not a smidgen. The people who believe in him took that and moved on.

Let me circle back to the race remark though, because something else Eric Holder said was, you know, we need to sort of be able to have this adult conversation about race in this country, he was defending his remarks from a couple of years ago when he said we're a nation of cowards when it comes to race.

And of course, many of his critics said, oh, there he goes again, but what do you think about it? I mean, obviously, you had suggested that President Obama didn't like white people, I mean, you apologized for that, you took it back and you give a full-throated apology for that remark. But do you think he had a point that we as a society are not capable of having an adult conversation about race rules and the truth?

With that being said, I think the American people are incredibly courageous. I think the only ones that I have seen, the ones who keep bringing race into it, are the ones who fought in the 1960s, one side or another, who lived through all of that. I'm 50, I didn't live through that. It was over by the time I became aware. We've never -- my children don't look at race as an issue. We believe in Martin Luther King's statement, judge a man by the content of his character.

It seems to me that there is a generation of people who lived through that period that just cannot let go of it. Either that or their people -- I mean, Eric Holder is probably about my age -- either that or they have been raised to feel this way. I don't know, but I don't want to live in Eric Holder's world that -- where you believe that Americans are cowards, that they do hate each other for race reasons. I don't know those people, I know they exist.

KELLY: Of course they exist.

BECK: But I don't know those people.

KELLY: Of course they exist.

BECK: That's not what America is.

KELLY: Well, that's the thing, he must be referring to some significant contingent in his mind otherwise it wouldn't there mentioning, and so that's why people play a lot of attention. I got to stand you by because we have to move on.

KELLY: We're going to have much more with Glenn tomorrow. But Glenn has a special movie theater event coming up on July 22nd, "We Will Not Conform." A special presentation about Common Core. It will be interesting. Michelle Malkin's in it.