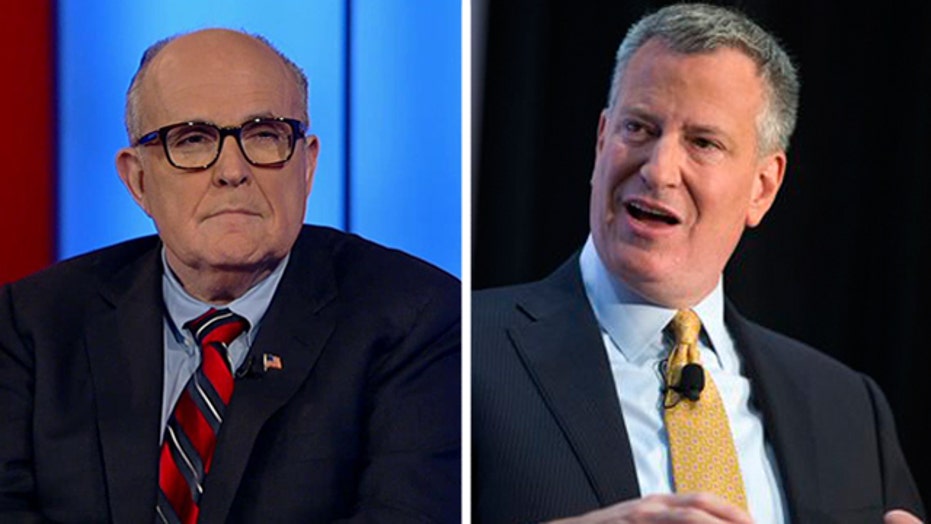 Giuliani: de Blasio has hard time getting past his ideology

This is a rush transcript from "Hannity," December 8, 2014. This copy may not be in its final form and may be updated.

SEAN HANNITY, HOST: Welcome to "Hannity." Tonight, it is mayor versus mayor here in New York City. In a moment, Rudy Giuliani will be here in studio to react to comrade Bill de Blasio's comments attacking him on race in America.

But over the weekend, the mayor doubled down on his emotionally (sic) and extremely personal comments about his own son following the grand jury decision not to indict NYPD officer Daniel Pantaleo in the death of Eric Garner. Take a look.

MAYOR BILL DE BLASIO, D-NYC: It's different for a white child. That's just the reality in this country. And with Dante very early on, with my son, we said, "Look, if a police officer stops, you do everything he tells you to do. Don't move suddenly. Don't reach for your cell phone." Because we knew, sadly, there's a greater chance it might be misinterpreted if it was a young man of color.

HANNITY: Now, the mayor continued that conversation on ABC's "This Week" only to attack former New York City Mayor Rudy Giuliani for stating solid statistics regarding heightened black crime rate in the black community. And this is what he said.

DE BLASIO: I think he fundamentally misunderstands reality. We're trying to bring police and community together. There is a problem here.  There is a rift here that has to be overcome. You cannot look at an incident in Missouri, another incident in Cleveland, Ohio, and another incident in New York City all happening in the space of weeks and act like there's not a problem. There's something fundamental we have to get at here, and it's not going to be helped by accusing either the community or the police of having bad intentions or not doing their job.

RUDY GIULIANI, R-FORMER NYC MAYOR: It's absolutely hilarious that I fundamentally misunderstand reality, when, in fact, what he's doing is propounding the idea that the police are responsible for this. I have never denied the fact that the police at times misbehave and act criminally. In fact, I don't remember Mayor de Blasio putting any police officers in prison. I've put about 70 in prison.

So, police officers can misbehave. And they are part of the problem. However, 96 percent of the problem is black-on-black crime, and his failure to recognize that is making this situation worse. If you want to have an honest conversation about race in this country and you're not a racist, you're not bending over backwards to worry about how you're perceived in one community or the other, you've got to be able to say two things. Any police shooting should be investigated carefully. And if the police officer's wrong, he goes right to prison. And not all the times are they wrong.

Number two, the reason those shootings take place more often in the black community than the white community is that in New York City, for example, the city he happens to be the mayor of, 75 percent of the shootings are done by blacks. That's the reality. That's reality.

GIULIANI: When you escape reality, I'm afraid that's the person that may be the racist.

HANNITY: All right, let me -- let me throw up some numbers here, and the latest year we have stats for is in 2012, and that is the number of blacks in 2012 killed by law enforcement with a firearm, 123. If you look at the percentage of black murder victims that are killed by other black offenders, that number -- we'll put it up -- is 90 percent!

So if I'm understanding what you're saying here, is if we want to save the lives of kids that are getting killed, we have to look at the bigger source of the problem -- in other words, the names that we don't know.

GIULIANI: What this indicates to me is the mayor has a hard time getting past his ideology. His ideology tells him police are bad, they cause the problems, I have to warn my son about the police. Well, there may be a one percent chance, maybe less, maybe a two percent chance that any black young boy is going to be shot by the police. There's a 95 percent chance they'll be shot by another black. So you better train him how not to get shot that 90 percent of the time.

HANNITY: Let me give you an example, and this is just one. And I'm not picking this out for any other reason, but it is so shocking. And I warn people ahead of time. This was on LiveLeak, the website, and it was reportedly outside the St. Louis area. And you watch this assault by a young person that picks up a shovel and beating people. You hear it so loud. Just take a look at this video.

HANNITY: All right. We're going to run that again -- beating!

GIULIANI: That's the rule, rather than the exception, what you just saw.

GIULIANI: That's the way it happens 90 percent of the time. The police shooting is the rare exception. And the reality is, there's a lack of proportion in what these people are saying. And in doing that, they escape the underlying problem. And if we don't deal with the underlying problems -- there's nothing inherently wrong with these communities. It's problems that have to be cured, problems that have to be dealt with, like education.

HANNITY: This is important...

GIULIANI: What about more jobs, more opportunities, doing what I did in Harlem, cleaning it up, cleaning up the crime so you can bring the national organizations that have never come to Harlem before.

GIULIANI: I would say if...

HANNITY: ... individuals in the city of New York.

GIULIANI: ... you look at my eight years in office, I saved more black lives than any mayor...

HANNITY: You say that...

GIULIANI: ... in the history of the city.

HANNITY: Now, this is important -- all right...

GIULIANI: And between Bloomberg and I, we certainly saved more black lives than any two mayors...

HANNITY: Was your plan designed to save black lives in particular?

GIULIANI: It was to save lives. I said one city, one standard.  There was no difference to me between a white life and a black life. And Bill Bratton knows this. The Comstat (ph) program assigns police officers based on statistics. Where are the crimes located? So I put a lot of police in Harlem, a lot of police in Bedford-Stuyvesant to save the children in Bedford-Stuyvesant and in Harlem, and I saved more...

HANNITY: And the murder rate went down.

GIULIANI: ... of them than any mayor in the city. Yes, how about it went down 65 percent. And 75 percent of that 65 percent saved black lives.  But when there were a lot of auto thefts in Brooklyn, which is where auto thefts took place because it was near the Verrazano Bridge, which I happen to have known as U.S. attorney, I was arresting mostly Italian white kids.  And when I was U.S. attorney, I was putting mostly Italian white Mafia guys in jail. So to me...

HANNITY: ... his comments to say that you don't -- you fundamentally misunderstand reality.

GIULIANI: I misunderstand reality? I've been spending my life fighting crime. I brought crime down more in this city than any mayor in the history of this city! If I misunderstood reality, crime would still be at, you know, 2,000 murders a year.

HANNITY: Yes. It seems to me that, for example, if you look at the Garner case, the amount of taxes in New York City and state for a pack of cigarettes is six bucks a pack. That's a lot of revenue for New York City, for New York State. They created a black market. So police are literally tasked with going into a convenience store...

GIULIANI: It isn't the police's fault!

GIULIANI: Could be the city's fault in terms of the laws that are passed, in terms of what the police are asked to do. Look at the Garner case this way. Suppose somebody was driving 80 miles an hour. Police pull you over and say, "Give me your license and registration," and you say, "Go to hell."

HANNITY: I'm going to be arrested!

GIULIANI: The police officer is going to have to -- what, is he going to walk away?

HANNITY: No. But they do task the police officers to go into these convenience stores...

GIULIANI: (INAUDIBLE) out of the car!

HANNITY: ... to see if they have the tax stamp on the cigarettes that they're selling.

GIULIANI: Mayor de Blasio may have more to do with that than the police officers!

HANNITY: My point. That is my point.

HANNITY: In other words, if they want the revenue so bad...

GIULIANI: But, how about one of the teaching moments of this could be, don't resist arrest. If we're going to train the police officers in courtesy, professionalism and respect, which we do all the time, and treat the community in a much more empathetic and decent way, how about we teach the community to treat the police as they should be treated, as the people who are putting their lives on the line to save them?

HANNITY: All right, Mayor Giuliani, always good to see you. Thank you for being with us.