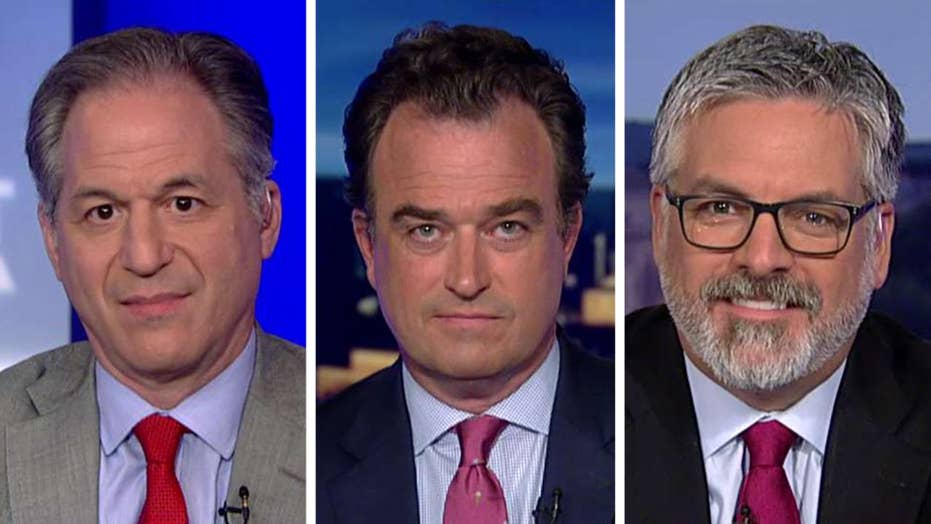 President Trump says he does not know the associates of Rudy Giuliani arrested for campaign finance violations; reaction and analysis from the 'Special Report' All-Star panel.

This is a rush transcript from "Special Report with Bret Baier," October 10, 2019. This copy may not be in its final form and may be updated.

GEOFFREY BERMAN, U.S. ATTORNEY: As alleged in the indictment, the defendants broke the law to gain political influence while avoiding disclosure of who was actually making the donations of where the money was coming from. They sought political influence not only to advance their own financial interests, but to advance the political interests of at least one foreign official, a Ukrainian government official who sought the dismissal of the U.S. ambassador to Ukraine.

SENATE MINORITY LEADER CHUCK SCHUMER, D-N.Y.: Giuliani has been involved up to his neck in this entire mess.

BRET BAIER, ANCHOR: Rudy Giuliani, the president's attorney, two of his associates arrested at the airport. These two men here, Lev Parnas, Igor Fruman, they had one-way tickets to Vienna. According to the indictments, they "had no significant prior history of political donations, sought to advance their personal financial interests and the political interests of at least one Ukrainian government official with whom they were working in order to conceal from third parties including creditors their sources of funding and capital. Parnas and Fruman created a limited liability corporation, Global Energy Producers, GEP, then intentionally caused certain large contributions to be reported in the name of GEP instead of their own names."

It's basically a campaign finance case. But the prosecutor, the U.S. attorney said today there is more to it. There's other people involved that have yet to be part of this investigation.

STEVE HAYES, THE DISPATCH: Thank you, thank you.

BAIER: Thoughts on this? We don't know the full story. We do know that the Florida governor, DeSantis, has decided to give back donations from these two men, that somehow Congressman Pete Sessions is involved in this.

But we don't know the full picture, as of yet.

HAYES: We don't. There's a lot to learn. If you look at the indictment, the indictment lays out these specific charges and provides a little detail about this specific action. It doesn't get into the broader story. And there really wasn't much reporting after this was revealed about what else this might involve. Of course, anytime you're talking about Ukraine in this political context and the ambassador, the firing of the ambassador, which was something the Trump White House had sought, the administration had sought.

BAIER: That's we're talking about Marie Yovanovitch, former U.S. ambassador. She's scheduled to testify tomorrow. We don't know if she will or not.

All of this is suggestive, all of this is early. I think you're like to see, to repeat this pattern, Trump administration officials distancing themselves from any and all of this because they don't know what's next, and probably some Democrats jumping way ahead of the facts as we have them right now to make broad accusations that are not yet supported by evidence.

BAIER: It's kind of a cycle we have seen in this town. Chuck?

CHARLES LANE, WASHINGTON POST: Kiev is really a swamp, it seems. And what I think is crucial about this, where this links up to the now famous, or notorious, phone call and the whole impeachment investigation, is that the apparent purpose of this undisclosed campaign donation was to gain influence in Trump's camp, and perhaps over Pete Sessions in Congress and others in Congress, to pressure and get rid of Ambassador Yovanovitch. Why would you want to get rid of Ambassador Yovanovitch? Because se was pursuing an anticorruption agenda out of the U.S. embassy. So somebody who was running afoul of that agenda seems to have been working through these two guys potentially to try and gain some kind of political foothold in the Trump world, may be for that and for other things.

BAIER: Ukraine, as you mentioned, is a swampy place. There's a lot of things -- one guy's corruption is another guy's fight, and some guys corruption, it goes all kinds of ways, and there are different angles happening there. But we heard from the Ukrainian president, David Spunt is over there in Kiev, at a big press conference today.

UKRAINIAN PRESIDENT VOLODYMYR ZELENSKY, (through translator): They blocked it even before we had the conversation, but we did not touch it in our conversation. At that moment I did not know about it. I talked to the defense minister afterwards, and he we have a problem. They've blocked that money. But when we were talking with Trump, this issue was not there at all, and after our meeting the U.S. unblocked it.

And also, as you know, there is an additional $140 million of aid. So there was no blackmail. I do not want to interfere by any means in the election of the independent state called the United States of America, and I will not do that.

BAIER: He is talking there about funding, military funding to Ukraine. He didn't know it was blocked at the time of the call, he didn't feel any pressure, no blackmail, and the funding was continuing.

CHARLES HURT, WASHINGTON TIMES: And I think the fact that he says that he didn't even know that the funding had been held up is key here in terms of the news out of that marathon, 11 hours interviews.

And so the way it stands right now is you have both principals and every name person that was on that phone call saying that there was nothing wrong with the phone call, that it was even perfect according to -- as Donald Trump likes to say. It's a real head-scratcher that Democrats want to continue to try and build some sort of case. I think that's why you see the flurry of subpoenas going on, continuing, is because they are not even intending to get any actual information to make the case, they want to make the case of they're not responding to the subpoenas, so we are going to charge them with obstruction of justice. It's all mystifying, and I think most people sitting at home just have no idea what these supposed charges really are.

BAIER: Eventually they have to get to articles of impeachment, and what that look like? It that obstruction, or is that the only one, or is it abuse of power? If the Ukrainian president is saying I didn't feel it was blackmail, I didn't feel any pressure, and the funding was still coming, what is the article of impeachment that the House draws up on that one line?

HAYES: I'm not sure they would be wise to focus on that one exclusively.

But the problem, as Charlie suggests, it is a lot more complicated, because it certainly matters that the president of Ukraine is saying, if there was blackmail, we didn't know anything about it. We didn't feel pressured.

And the timing of that suggests that they didn't know.

But it's certainly the case that many of the Americans involved in this, Trump administration officials, were worried about this kind of withholding the aid as a trigger to start these investigations, and some of them in their emails back and forth did in fact talk about quid pro quos and this kind of horse trading. That is a problem. It matters if that was happening. I think it's inappropriate.

And while President Trump describes that phone call is perfect, there are certainly a lot of Republicans on Capitol Hill who do not at all think it was perfect, and are nervous in a way I think about this that they were not nervous during the Mueller investigation.

BAIER: What they are not nervous about also is speaking out about the Turkey policy, and a lot of them have come out and said that they have a problem with one way or another. Tonight we are told the president has tasked the State Department to try to get in between Turkey and the Kurds and find some solution. Good luck with that. It's been many years.

TRUMP: Turkey knows where I stand. We won, we left the area. I don't think we want to go back in.

Let's see what happens. We are going to possibly do something very, very tough with respect to sanctions and other financial things.

BAIER: Coming from the president, also up on Capitol Hill, Liz Cheney, "If Turkey wants to be treated like an ally it must begin behaving like one.

They must be sanctioned for their attacks on our Kurdish allies." So in other words, the president saying it doesn't have to be military, it could be financial.

LANE: There is, of course, this very difficult issue of betraying a force, the Kurds, who helped us defeat ISIS. But even more of concern is what's going to happen to ISIS now. By most accounts there are 11,000 to 12,000 ISIS fighters who are kind of in prison being guarded by the Kurds.

BAIER: As of tonight, they're still in prison, being held by the Kurdish guards.

LANE: Right. And they have 60,000 or 70,000 family members that go along with them. That's a very dangerous situation where those people -- if Erdogan gets a hold of them, he could put them to work for him fighting the Kurds. They could get out. And the president I think really irresponsibly just sort of dismissively said, well, they only want to go to Europe anyway, implying who cares? They won't be our problem. And that is where he is claiming we won a victory. He may be right, but it could all go poof.

HURT: I certainly understand why so many people on Capitol Hill are concerned about this, and the situation with the Kurds as a truly terrible one. But the way around this is to have Congress vote to go to war. If we did that through the process, you wind up --

BAIER: With a NATO ally?

HURT: No, no. What's interesting is nobody knows who the heck we are fighting over there. And that's part of the problem is Washington, when Trump talks about these endless wars, that's what he's talking about. He's talking about, it is long frustrated Democratic voters. It now frustrates Democrat and Republican voters at a time when it seems to unify lawmakers on Capitol Hill in favor of these things.

HAYES: Very briefly, there is news on some of this tonight. Lindsey Graham and Chris Van Hollen in the Senate have introduced legislation to further sanction the Turks if they in fact go through with this and commit atrocities. There is now companion legislation introduced by Liz Cheney and 30 of her colleagues that will be coming in the House.