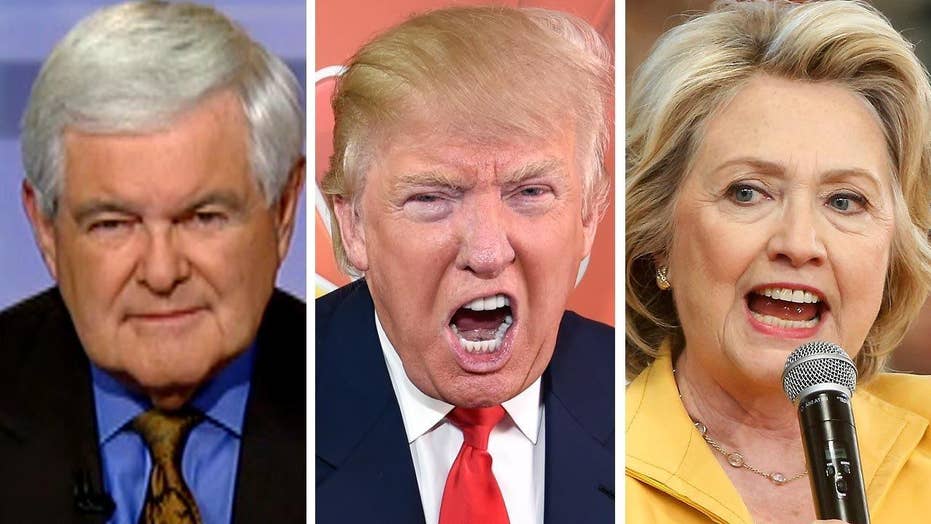 Gingrich's take: No more kid gloves in Trump vs. Clinton

Former House Speaker and presidential candidate goes 'On the Record' on Hillary Clinton's blistering attack against Donald Trump in foreign policy speech, its potential impact and what it means in the road to November

This is a rush transcript from "On the Record," June 3, 2016. This copy may not be in its final form and may be updated.

KIMBERLY GUILFOYLE, 'ON THE RECORD' GUEST HOST: Batting off, leading off, for us tonight, former Speaker of the House Newt Gingrich goes ON THE RECORD.

Always a pleasure to have you here ON THE RECORD and on "Fox."

So, wow, just so you know, that was labeled a foreign policy speech by Hillary Clinton. Your thoughts.

There are huge disagreements over legitimate policy. It would be tempting to see the two of them try for a week to just talk about their policy disagreements. But I don't think they can.

One of them may turn out to be the less unliked, but it won't be a very good way to run the country.

GUILFOYLE: If you were advising Secretary Clinton, what would you have told her to do in that foreign policy speech? Would you say lay out some specifics and stay away from personal attacks?

GINGRICH: I actually would say to her that for the next two months, she ought to focus on a positive vision of a better America and a better future. She has an opportunity to try to define how she would be different from Obama and how clearly she is different from Trump.

And she doesn't need, you know, she doesn't need to attack Trump as intensely as she is right now. Trump is going to be around. He is not going to change much. She could take him on starting around September 1st and do just fine.

GUILFOYLE: OK. Now, specifically, though, if she was to focus on her foreign policy accomplishments and achievements, many of the critics say what could she tout, in fact? And Donald Trump hit her on the fact that, you know, she has got her DNA directly tied to the failed foreign policy and failed national security of President Barack Obama. And she was there for it as secretary of state.

GINGRICH: Of course. Well, and that's one of her challenges. Look, if she gets sucked in to defending the past. She is going to get killed.

I mean, my favorite story is this Russian reset button, her very first meeting with the Russian foreign minister. For some idiotic reason her staff goes and gets the button off the whirlpool of the hotel, which is a red button. They paint what they thought in Russian what was restart. It turned out that it actually was overcharge. Because the translator got it wrong.

They give it to the Russian foreign minister who breaks out laughing and says no, we are not going to pay an overcharge. I mean, nothing captured better the childishness and the incompetence of the Clinton secretary of state than her effort to reset stupidly.

Now, I don't think she is going to win a fight over the recent past. If she got sucked into defending Libya, defending Benghazi, defending Syria, defending what she has done with Russia, she is just going to end up getting beaten into the ground.

GUILFOYLE: Yes, it's really a problem. And then you tie in, of course, the email server, the private server scandal, the refusal to turn over emails, the deletion, et cetera, all impinging upon national security. They are highly problematic for her.

It just seems that there is some legitimate grievances that the American people might have with her suitability as a potential commander-in-chief.

GINGRICH: Which, of course, what makes her attack on Trump about whether or not he is suitable to be commander-in-chief kind of goofy.

I think that the challenge we've got and it's a really sad challenge is right now these two candidates are rushing into a campaign to see which one we dislike least, because we're going to end up disliking both of them.

And the question is going to be on election day holding your nose and deciding, OK, I have to be "X," because I can't be for "Y."

I just think as a citizen, that's not a very good way to run the country.

GUILFOYLE: No. That's the problem. So they are going a little bit back and forth. But I think this is a good indicator of how things are going to be, you know, going forward is a little bit of a taste test about the general election. But a lot more and as you see, of course, the protesters, violence erupting, so emotions are running high, speaker.

GINGRICH: That's right. Well, and, by the way, if you look at what happened to Governor Walker in Wisconsin, you had better expect left wing protesters and a certain amount of left wing intimidation because when Walker introduced his reforms in February of 2011, they ended up with 100,000 people in Madison.

GINGRICH: Now, Wisconsin is not that big of state. You take that and project it on to the city of Washington, you could imagine a Trump presidency, a million people brought in by the unions and you can imagine over the next few months how hostile some of these outside crowds are going to be just as happened in San Jose.

GUILFOYLE: OK. Well, both sides, I think, need to send a strong message that violence will not be tolerated.

Speaker, always a pleasure to have you. Thanks for joining us tonight.

GINGRICH: Good to be with you. Thank you.