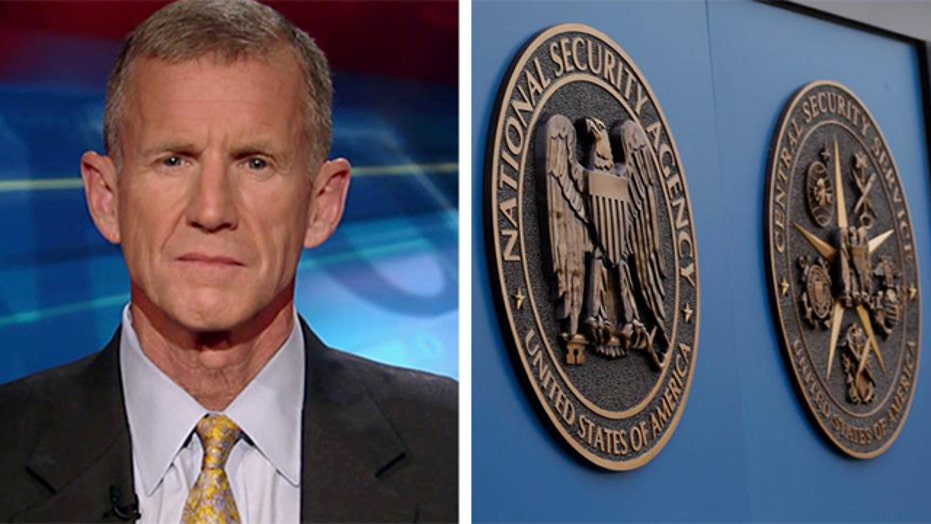 This is a rush transcript from "Your World," June 1, 2015. This copy may not be in its final form and may be updated.

NEIL CAVUTO, HOST: Now to Retired General Stanley McChrystal, who is also watching these developments very closely in the Senate, of course author of a brand-new book "Team of Teams."

First, I recognize people's concerns about privacy. But I would say that we're facing a threat now that is living in the 21st century and we're having a tough time getting our minds about that.

ISIS uses terrorist tactics. It also uses some very deft battlefield tactics as well, but it really excels on the Internet with all kinds of digital media. And it allows them to get their fear out to people, but also to do recruiting around the world and to franchise their movement.

CAVUTO: Well, how would any of this stuff, General, deal with that?

MCCHRYSTAL: Well, we have got to be effective in the digital world, and we can't pretend that that's not where they operate effectively.

And so we have got to do the balance. We have got to make a decision on where it is. I think it will constantly be refined, to be honest, because the digits exist and they're out there. But we are going to have to admit that we have got to fight, compete effectively in the digital world. And I think we're a little bit behind on that.

CAVUTO: You know, General, General Petraeus was telling me on my FOX Business show that every hour and day we wait is an hour and day that we're vulnerable. Do you agree with that? Is it that bad?

MCCHRYSTAL: Well, I think that's correct. People around the world are competing with us asymmetrically, the equivalent of garage store start-ups.

But they're also asymmetrically committed to their particular cause. In some cases, it's just to cause damage. So I think our ability to protect ourselves in the world of cyber, the things that our economy depends upon now, our society does, but also to protect ourselves in the minds of the world, getting our message across and competing, are going to be more and more important every day.

CAVUTO: Let me ask you. And I asked General Petraeus this, this idea of, how far do you go to protect people? Do you draw the line, General, at 120 million Americans' phone records being collected?

In my experience with it, I never saw abuse of it and I saw great use in the areas where I was involved.

CAVUTO: Because the Rand Pauls and the like, sir, as you know, say hasn't stopped a single incident. You say?

MCCHRYSTAL: Well, I respect their concerns. My experience would draw a different conclusion.

I would also say that Americans are already giving up much of their privacy to commercial sales elements, to out -- to cameras out around the street.  More and more, we can figure out where a person is, the police or authorities or phone companies, pretty easily.

That's a new reality we have to deal with. Buy something online and suddenly you're bombarded with sales.

MCCHRYSTAL: And so we have to get our mind around that. But one of the things we shouldn't do is pretend that we're not in the new age, pretend that the digits aren't out there, pretend that our opponents are not using this very effectively.

CAVUTO: So, when Senator Rand Paul and some of these others, largely libertarians argue the point, well, we can protect ourselves, and you can have companies still collecting this data, they're just going to need a court order to -- that is, the government -- to get their hands on it, what is wrong with that?

MCCHRYSTAL: In some cases, I think that's fine. In fact, we have used court orders to get this data for as long as I was involved in it. So I think the controls were very effective in my experience.

I think this will be a constantly refining balance. If we try to write a law that is good for the next 15 years, I think we will be very disappointed, because technology will jump ahead of that very rapidly.

So what we have got to do is have an ongoing discussion inside the United States how much of our privacy we're willing to give up for how much security we think we need. I was down at the site of the World Trade towers just a week or so ago and it's a good reminder that many of the things that were put in place right after 9/11 weren't put in place by crazy people trying to take away rights. They were a reaction. Do they need to be adjusted? Constantly.

CAVUTO: When you say adjusted, then, would that include adjusting the size and scope, the mega-data portion of this that gets so unruly where, like I say, you collect tens of millions of Americans' phone records?

MCCHRYSTAL: Yes, the reality is the phone records exist. By definition, they exist. So the question is who is going to have them and what access there is to them. So I think you're going to have to keep adjusting that.

I think it's time for a good look at it, so people are comfortable. But we have really got to educate the American people what this is about. People are not listening to their phone calls right now. They're not reading their e-mails right now, unless they have got a court order. So I think we just have to have an informed conversation about it.

CAVUTO: We're negotiating, as you know, General, with the government of Qatar as to these five former Gitmo detainees who were part of that Bowe Bergdahl swap.

PETRAEUS: This will work out. They recognize...

CAVUTO: Do you ever regret that swap, in retrospect, knowing what you know?

CAVUTO: Do you think it was worth it?

MCCHRYSTAL: I think we have to get American service members back.

I won't judge whether that particular swap was a good plan. I think we navigate from where we are now. I think it's very likely that...

CAVUTO: But knowing what you do know now, General, about Bowe Bergdahl, that he could have been a turncoat or a traitor, would you have yourself been as aggressive on such a deal?

MCCHRYSTAL: Well, we thought that he had walked away from his base. I was in command when it happened.

MCCHRYSTAL: But we didn't know his mental state. He was a young man.

And so the effort to get him back, I think, is keeping faith with that soldier and with every soldier.

CAVUTO: How would you police the whereabouts of these five? If Qatar says, all right, we will watch them another six months and all, do you trust them? Can they do that? Will they?

MCCHRYSTAL: Well, almost by definition, I trust the Qataris, but I don't trust the five. And I don't think we could expect that they wouldn't go back. If we had an American...

CAVUTO: Wouldn't go back into battle?

If we had an American who was captured for five years and he came back to us, we wouldn't expect him to suddenly be siding with the enemy. So I think we have got to expect that.

But five people aren't going to change the calculus or balance of the fight there. It is, it could be a bit of a morale victory for the Taliban. They could use this for propaganda. But I don't -- I wouldn't overplay that. I think we are where we are. We move forward. And if they go back into the fight, they become part of the combatants again.

CAVUTO: Do you fear that the other 100 or so remaining, if we're not going to be very good -- or it's impossible to keep track of these five, depending on what happens in the next few days, weeks or months of litigation, that it's dangerous to let the remaining 100 or so out?

MCCHRYSTAL: Well, it is certainly dangerous to let many of them out.

But, on the other hand, we have got a very difficult situation here. We don't have a good solution for how we're going to handle any of these detainees post-9/11. It's been a political issue to have Guantanamo Bay.  We couldn't get political support to bring it to the United States, to bring the detainees here.

Releasing them to home countries in many cases were problematic. So I think people, if they step back and they look at how difficult this problem is, they suddenly should draw concerns. I think we have got to make a policy decision on how we're going to handle this because there are going to be situations in the days ahead where we are going to have the ability to capture somebody, and we have got to have a plan on what we do with them.

CAVUTO: Do you think ISIS or any other country that, group that wishes us ill looks out our division over what to do with the NSA, the Patriot Act, what not -- or what not to do as far as Gitmo, and they're just enjoying it?

MCCHRYSTAL: Well, I think one of the strengths of America has always been an intense internal debate.

But I will tell you, my experience around the region is, we are sometimes murky on what is happening in other countries. They're very informed on what happens in the United States and our politics and our debate and whatnot.

CAVUTO: We're showing a lot of both.

MCCHRYSTAL: Yes. I think, in the world of foreign policy, I would like to see more unity in the United States. And we can argue about other things, but there are things we should stay focused on together.

CAVUTO: If Rand Paul were your commander in chief, would that be OK?

MCCHRYSTAL: Whoever the American people elect is going to be OK with the military, because you automatically are going to be loyal to whoever serves that position.

CAVUTO: And you applied that to Barack Obama as well.

CAVUTO: All right, General, thank you very much. Very good seeing you.