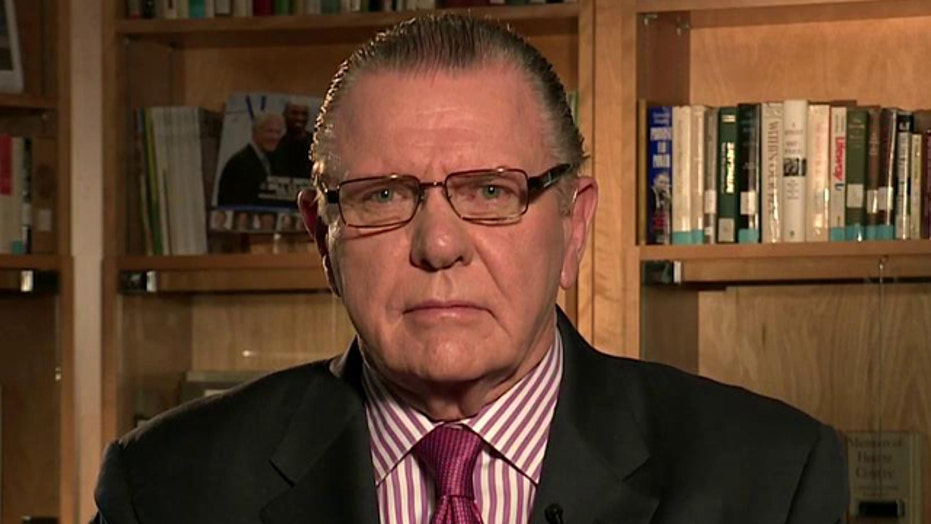 This is a rush transcript from "The Kelly File," August 28, 2014. This copy may not be in its final form and may be updated.

MEGYN KELLY, HOST: Joining me now General Jack Keane, he's chairman of the institute for the study of war and a Fox News military analyst.

GEN. JACK KEANE, FOX NEWS MILITARY ANALYST: Well, it's an extraordinary and stunning admission coming from the leader of the world's most powerful nation. And, you know, as such, Megyn, it's embarrassing also.

As you pointed out in the introduction, we know a lot about ISIS. They re-emerged in 2009 and 2010 in earnest in Iraq. They moved into Syria in a comprehensive way in 2011. They've been there for three years taking control of territory. They were a growing menace every single month increasing in territorial control and imposing their harsh governance.

Our Intel agencies have been watching them all this time. The institute of the study of war we've tracked them on a daily basis. We've shared information with intelligence agencies, with the Department of State, with the Department of Defense, everybody in our government in the National Security business knows this organization and what a significant threat it is to the Middle East, which is attacking our vital interests and also to our country. We need a comprehensive strategy. And I fear, I fear that we may not get one.

KELLY: The president even though he uttered those words, seemed to then go on to outline what he's thinking right now. He suggested that, yes, we need to have a military presence there. And he's asked for recommendations from Chuck Hagel and General Dempsey on what that should be. He's suggested that we needed to get, you know, new leadership in place in Iraq, which has now happened because otherwise, you know, we need the right political leadership in place. And he talked about building a coalition of forces, so it's not just the United States.

And by the way, Secretary of State John Kerry is over there right now. Here's how the president outlined what he's thinking so far and in particular I'd like to get your thoughts on how he said, look, you know, we can do all the military stuff we want in the world, but it's not going to do anything unless we follow through and get a coalition. Listen to the president.

PRESIDENT BARACK OBAMA: Our military's the best in the world. We can rout ISIS on the ground and keep a lid on things temporarily, but then as soon as we leave the same problems come back again. This should be a wakeup call to Sunni, to Shia, to everybody, that a group like ISIS is beyond the pale. We've got to all join together even if we have differences on a range of political issues, to make sure that they're rooted out.

KELLY: How does that sound to you, General?

KEANE: Well, I agree with much of that. The fact of the matter is we do need to lead a coalition, particularly from the region but also with other allies. It has to transcend political, diplomatic, economic and military. But you do have to go out there and attack them. You have to destroy what they have. And you have to end up killing and capturing a lot of them. We've done this before. But the fact of the matter is we have to assist our allies there.

The fact is that free Syrian army we should robustly arm them and train them and stop doing half measures which we're currently doing. The people on the ground in Iraq that are going to lead this, the Iraqi army will lead it with Peshmerga, Sunni tribal leaders will participate as they are in Anbar province and also the Shia. Here's what we don't know though, Megyn, we will lead the air strikes. I'm convinced we'll eventually get to do it. We'll have coalition partners doing it. And it will be effective. But we cannot defeat ISIS with those air strikes alone. The only way you can do that is a combination of a ground force supported by air power. The ground force are going to be others that we are going to support. And we do not know if they're going to be affected. That is the unknown question here. And we're just going to have to see. And we don't know either how long it's going to take.

KELLY: Why do you think the president said he has no strategy given that he's clearly being briefed on all of this? There's no way General Dempsey doesn't have an idea of where to go in and do militarily.

KEANE: I think he made that statement because he hasn't made a decision about what to do. And I think that was an honest reflection of that. I mean, I know for a fact that there is military campaign strategy that the Pentagon has that's been developed by Central Command Headquarters at Tampa, Florida. They had regional responsibility here. And along with that obviously they would also have a range of options. So inside the National Security apparatus, I'm convinced there's a lot of thinking going on.

But I believe he hasn't got as involved as they are, and number two, he hasn't made any decisions. And I think that was an honest answer. He didn't have a strategy. And that is what is so embarrassing after all this time that we're not conversing with this to the degree that we could really talk about it in some level of detail even though he may not have made a final decision.

KELLY: Sure he'll be mulling it over at the fundraisers tomorrow. General, thank you.