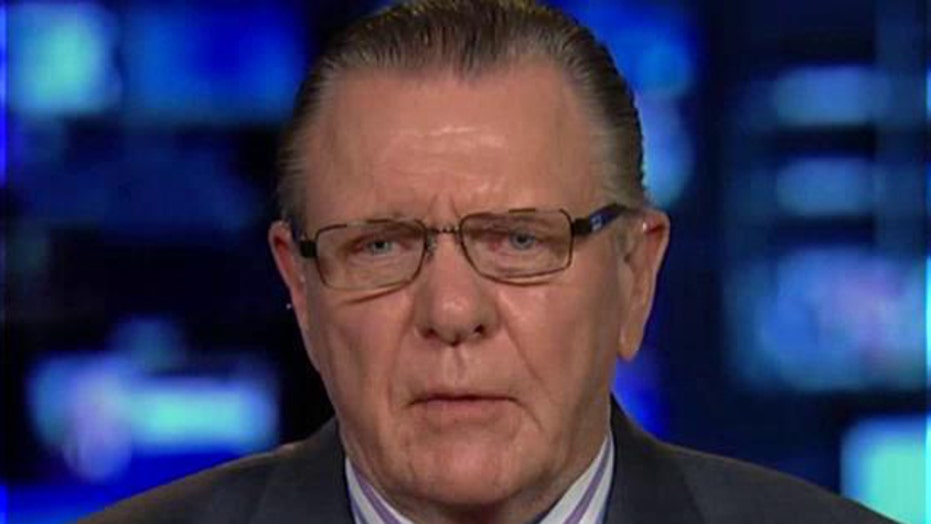 Gen. Keane on failed US rescue of American hostages

This is a rush transcript from "The Kelly File," August 20, 2014. This copy may not be in its final form and may be updated.

MEGYN KELLY, HOST: Breaking tonight, new details on the American journalist, Jim Foley, who was beheaded by the terror group ISIS. Just hours ago the White House was reporting that President Obama actually authorized a rescue mission for Foley and others earlier this summer. It was ultimately unsuccessful.

General Jack Keane is a former Army vice chief of staff, a four-star general and Fox News military analyst. General, good to see you tonight. And so, why are we -- why are we being told this, because the details are plentiful. It's rather extraordinary.

JACK KEANE, FOUR-STAR GENERAL (RET): Yeah. I think as a matter of principle, Megyn, we really shouldn't talk about these operations. And certainly an operation like this is no reason to disclose it. At deference to Mr. Foley's family, I probably would have told that family what we had attempted to do at least and give them some comfort that we may did try to rescue him.

But, you know, even going back to the bin Laden raid which was obviously successful, the amount of information that was released after that infuriated the secretary of defense. I know if our special operators were here, they don't want these things talked about. They don't want them out in the media.

What will happen now because we disclosed the event, journalists will pursue with sources to get more information about the details of that event. And that is what the special operators don't want out there.

KELLY: And if you look at what the White House has revealed, I mean, it's lengthy. They go into all sorts of details about the operation and what parts of it failed and where they were carried out and how they were carried out. And then, it's also being reported that there is some concern among military personnel that the release of this info will impede them from being able to carry out this information or this kind of operation in the future. Do you share that concern?

KEANE: Oh yeah, absolutely. Listen, here's what they depend on. You know, first of all, they need accurate intelligence. And obviously in this case they didn't have it. Secondly, they need the element of surprise because we plop them downright usually in the middle of the enemy. And after that they certainly have to rely on their extraordinary skill and also on their daring and courage. All those elements contribute to success. And certainly surprise is something they absolutely need to have or else they lose the advantage.

And so, they don't want people on their guard about these kind of operations. We've got about eight hostages in seven different country. You can know for a fact that every one of those people who are holding them captive are looking at where are they, should we move them, what's the circumstances, do we have enough -- do we have enough prevention here in the event that somebody was coming after them.

KELLY: Right. Now they know exactly how we did it. I mean, they say that they would held some details because it's possible that there could be future rescue attempts. But boy, they offer quite a number of other details. And the question is, you know, why did they do it, general? Was this a CYA, was this a, you know, the critics had been saying, you know, why did -- why didn't we do more to get these Americans and so did the administration have to defend itself?

KEANE: Well, I think, the obvious conclusion you come to it, they want to take some credit for something they tried although it, you know, it obviously didn't work. And I don't think that's enough reason for this kind of a disclosure, because we want to do this again.

The fact of the matter is when we have somebody hostage, Megyn, that is a very high-intelligent collection priority. And we are focused on that. And we seized the moment to try to get them. These are the most dangerous missions we conduct. It's easier to go kill Bin Laden than it is to rescue someone because success of the mission is dependent on rescuing them successfully, getting them out alive.

KELLY: Alive. Wow. It's amazing how brave our troops are. This is a good reminder. General, good to see you.