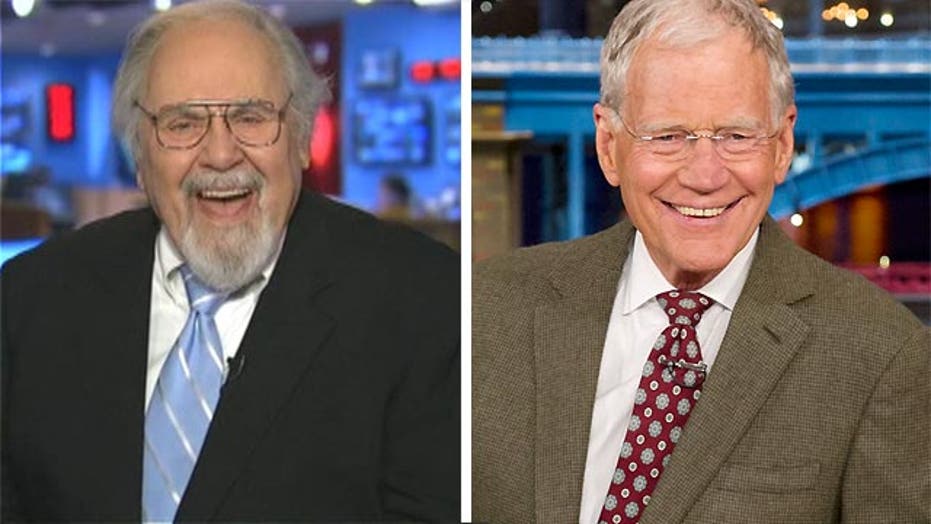 'Laugh In' creator weighs in

This is a rush transcript from "Your World," May 20, 2015. This copy may not be in its final form and may be updated.

NEIL CAVUTO, HOST: As some of you know, David Letterman is going to be stepping off the stage tonight.

And to hear many in the media tell it, late night will never be the same.  But wait a minute. Isn't that what they said when Jay Leno left and, before that when Johnny Carson left, and before that when Jack Paar left?

To the producer who brought us "Laugh-In" and got Richard Nixon to say, "Sock it to me" -- I like reminding him of that -- who suspects we're all getting a little ahead of ourselves. After all, that's the same thing they said about George Schlatter himself when he retired, that we would never laugh again. Then all the presidential campaigns came, and old George said we did not miss a beat.

George, very good to have you. Thanks for coming.

GEORGE SCHLATTER, EXECUTIVE PRODUCER, GEORGE SCHLATTER PRODUCTIONS: It's wonderful to be here. What an excellent career opportunity to follow an airport shoot-out.

CAVUTO: You know, I -- from a distance, the guy did look like you, so I'm glad to see that it was not you.   But, George, what do you make of this?

CAVUTO: That was tacky. And that was -- showed no class on my part.

But what do you make of this and Letterman leaving? And you have heard what everyone is writing. Oh, it won't be the same again, blah, blah, blah.

But it is a shame to lose David, because he's a treasure and he's been there for 35 years. The interesting thing is, we don't think about David when he arrived, because when he arrived, he was a big tall, skinny, bumbling kind of stand-up comic.

We look at the finished product, which is brilliant, the same thing with Jay and Johnny and all of them. These guys are national treasures. They are our pressure valve. And we need them. And I'm sorry to see him leave.

CAVUTO: But we have others out there. Right? We have Kimmel and Fallon and so many others.

And now I'm just wondering they might not be up to those standards that others talk about, but, you know, they get to be the new topical guys.

CAVUTO: And we have seen and tend to forget the old guys. I was mentioning Jack Paar and Steve Allen to people on my staff. They had no idea I was talking about.

SCHLATTER: Well, don't leave out, you know, Rush Limbaugh and Sean Hannity. Those guys are going to keep comedy alive, I think.

CAVUTO: You know, I had a feeling. This was always a risk. But I love you.

CAVUTO: But go ahead. Make your point.

Comedy -- comedy is what keeps us alive. In the old days, they had the court jester. And he's the only one that could tell the emperor that he was naked and not very generously endowed. Now, today, we need those pressure valves. We need these guys to keep us -- keep us laughing, because -- and the strange thing is, Neil, when we went on the air -- it's now 50 years when we went on the air with "Laugh-In."

CAVUTO: Is that right? Holy cow.

We haven't solved one thing, which is bad for us, but it's great for comedy.

That's something oddly enough that Letterman was not very big on or in to.  What do you make of that?

Now, where are they coming from? Hopefully, they will change it some more.  There's new rules. There's new restrictions that are not there. The things that we were talking about that were shocking in 1966 and '67, we said everybody who is for abortion has already been born. Well, everybody got rattled at that, you know?

But now it seems so very tame. There are things now that you can talk about and should. Humor is our pressure valve. That's the way we can release all of the tensions. And it's very healthy thing to have these guys. And Bill Maher, he...

And I -- I don't know about that. Now, you're the expert. I will defer to you. But I just see it as ubiquitous and 24/7 throughout the day. What do you think?

SCHLATTER: But it's -- this is late night. We don't have any money.

Well, when you look at what those guys were making, and should, it is a vital national resource that we have. And it's good to see it. It's good.  And David will be missed. His show last night wasn't too good because Bill Murray came on and tried to get him drunk. And Regis was on for a long time talking about himself.

But, as a rule, Letterman is reliable and he's funny and he's welcome. And certainly he's welcome in our house. But then you had Jay Leno and all the guys who came...

CAVUTO: Did you have a favorite? That was always the thing. Jay Leno -- there is some talk that maybe Jay Leno makes an appearance tonight. I don't know if that's true or not in the final show.

But everyone had their preference. Either you like Jay Leno, or you like David Letterman. Did you have a preference?

SCHLATTER: Yes, well, one of my preferences, nobody remembers, but Ernie Kovacs. Jolene did the Kovacs shows. And he was the one that introduced all of the zany visuals and so forth.

CAVUTO: I know, but I asked you about Leno and Letterman and who you liked more to see if I could put you on the spot.

SCHLATTER: Probably -- probably Letterman -- Leno, only because I worked more with Jay.

SCHLATTER: I didn't get the chance to work that much with David. But the people that they brought on -- they were funny themselves.

But when you think about all of the avenue of comics that are now open, Robin Williams and Bill Maher and Billy Crystal and those guys, they came to prominence on these shows hosted by Jay and David and the rest of them.

So, it's a healthy thing. Keep comedy -- keep comedy -- you just had a debate between Ted Cruz, right, and...

CAVUTO: I didn't have Ted Cruz. But thank you very much.

But I will send Hannity your best.

CAVUTO: I love you back, my friend.

CAVUTO: Left or right, there's no doubt, and you are a giant in this business. You got a lot of the great...

SCHLATTER: Say hello -- say hello to Mrs. Cavuto, will you?

CAVUTO: George Schlatter, it's a pleasure, my friend, an institution, or a guy who should be put in one.

SCHLATTER: Nice to see you.

Meanwhile, I'm sure a lot of you might have...

SCHLATTER: Where did you get that?

CAVUTO: It's just the way I roll, George, but I have to move on here and inform a nation.