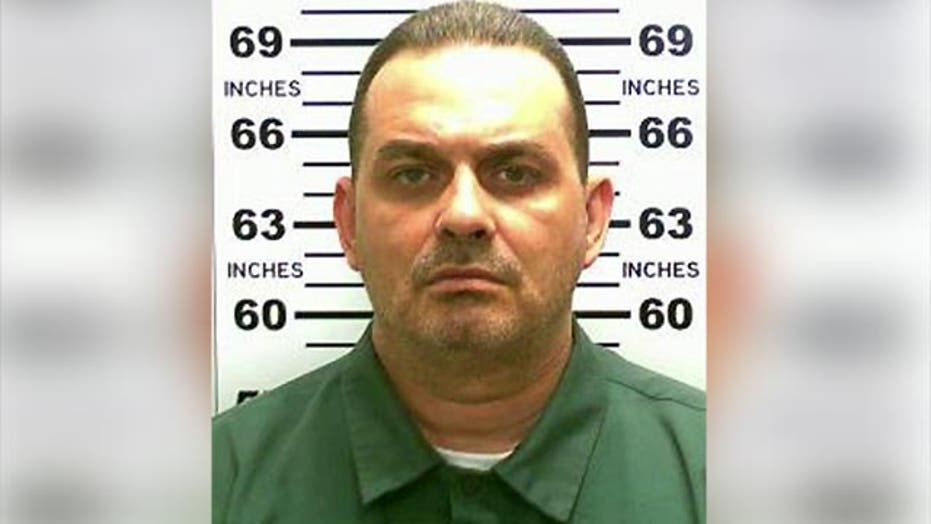 Fugitive's half-brother fears for his life

'Prison Break: Manhunt for Murderers' - Wayne Schimpf, half-brother of escaped murderer Richard Matt, is convinced he's coming for him and will try to kill him

This is a rush transcript from "On the Record," June 19, 2015. This copy may not be in its final form and may be updated.

GRETA VAN SUSTEREN, FOX NEWS HOST: This will send a shiver up your spine. The half-brother of escaped murder, Richard Matt, says his family fears the killers are coming to get them.

VAN SUSTEREN: We have spoken to you before. Are you still in fear that your brother may come get you, come kill you because you testified against him?

SCHIMPF: Yes, I am. And even more so today.

VAN SUSTEREN: Why more so now?

SCHIMPF: Well, without getting into a lot of details, thanks to media putting out a lot of my personal information out there, not only him, but friends of his now know exactly where to find me. And I have received death threats, anonymous death threats over the years. So now I am even more afraid.

VAN SUSTEREN: All right. The police have recently been to your house. Did they question you? What did they do at your house?

SCHIMPF: I got a strange phone call that I wasn't sure, so I checked to make sure it was who they said they were, and it was the New York state troopers. And the next thing I know, there was probably about 100 heavily armed officers outside, three SWAT trucks, the whole street was blocked off for a good half mile. And they came in and went through the House, opening every cupboard, door, shower door, taking the cushions off the couch on to the floor. They went into the garage. I mean, they were here for a good hour and a half searching the house.

VAN SUSTEREN: You know, Wayne, when you hear the details of the murder for which your brother, half-brother was imprisoned, it's quite breathtaking that he killed an elderly man, put him in the trunk, drove him around and broke his fingers and broke his neck. It snapped so loudly you could hear it snap, according to his accomplice. Then he killed him, dismembered him and threw him in the river. Is it in your mind, do you know that guy?

SCHIMPF: That man, no. I still -- I still kind of find it hard to believe. I mean, I know it's true. But I just -- myself, I cannot see a person doing that. So I just -- it is hard to accept, if you can understand.

VAN SUSTEREN: Indeed. Well, you testified against him. He was convicted. So, that's why you think he might come for you, right?

SCHIMPF: Yes. Yes. He had told me that if I ever turned against him, he would kill me.

VAN SUSTEREN: Do you find it unusual that they haven't found him yet? I mean, is he a smart guy? Do you think he is headed back to Mexico where he has been before? Do you have any thoughts about where he might be?

SCHIMPF: I have not had any contact with him. I have no direct knowledge of where he may be. It is my personal opinion that is he long gone out of New York State. And I wouldn't be surprised if he did go back to Mexico and travel further south because he does know from the past that Mexico will send him back to the United States. Like I said, I have no knowledge but it is my personal opinion that he is long gone.

VAN SUSTEREN: All right. The fact that he might be long gone, you still are in fear tonight?

SCHIMPF: Well, yeah, because you never know. I mean, you still hear reports on the news that they are searching up in Dannemora. So, I mean, until I know exactly that they have him, I can't rest.

VAN SUSTEREN: Wayne, thank you for joining us.

SCHRIMPF: Thank you very much.