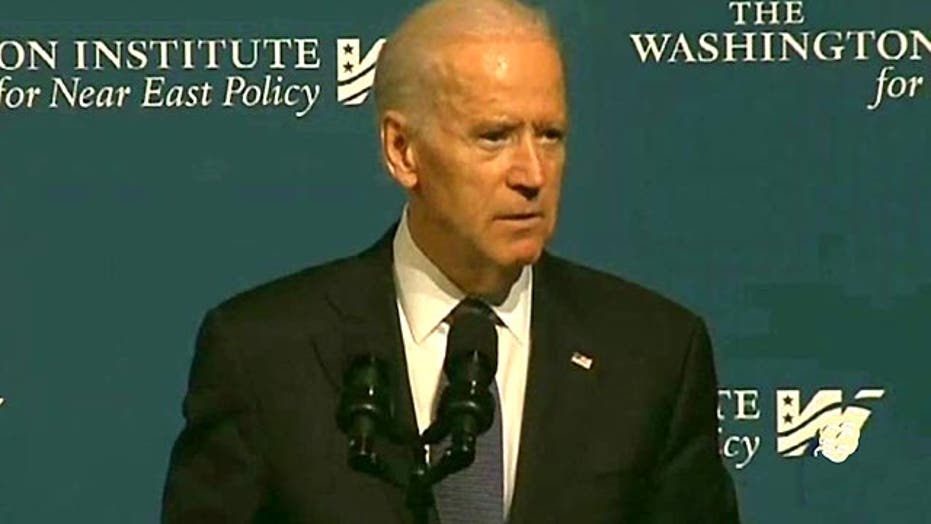 This is a rush transcript from "Special Report," May 1, 2015. This copy may not be in its final form and may be updated.

SHANNON BREAM, ANCHOR: We are back with our panel. Judy, I want to start with you. Some of these new comments from the vice president talking about Iran saying that there is nothing off the table when it comes to talking about a threat of a nuclear situation with them. He says none. Today asked about, White House Press Secretary Josh Earnest said that's always been our posture, that nothing is off the table.

JUDITH MILLER, THE MANHATTAN INSTITUTE: That is their posture. But I think the Iran speech that Biden gave last night was really important. I was there and I was also responding on a Washington Institute panel to what he said. The consensus of the Iran watchers in the room that it was a very important statement in that Joe Biden responded to the ayatollah. He said the ayatollah has said we are not going to have sanctions on right after the ink on the treaty is signed. He also said you are not coming into our military facilities if they are suspect. And Joe Biden took both of those on and said if that's the case, there is no deal. It was a speech to the ayatollah and also to Bibi Netanyahu, saying get out of our way.

BREAM: Charles, after all of this with the administration, do you think there is a chance we don't get a deal?

CHARLES KRAUTHAMMER, SYNDICATED COLUMNIST: I think it's a very small chance because Obama is determined to get it. He needs one thing to show as a success and this is it, even though it's going to be a catastrophe. But I think this also was aimed at our allies, the Gulf Arabs and the Israelis. And Biden actually said because the U.S. administration is now going to offer guarantees, he said "I know the president, you should trust him because he has a spine of steel." I don't know anybody who believes that except Joe Biden.

BREAM: OK. Someone that is hoping she doesn't have to deal with Joe Biden running, Hillary Clinton. Jason let's talk about that because she, as Ed Henry reported today, she is doing a lot of distancing of herself between her and President Obama on some things, but between her and her husband, the former president as well, and we talk about crime and trade and all kinds of things. That's a tough line to walk.

JASON RILEY, WALL STREET JOURNAL: It is, she -- Hillary wants to run as Bill Clinton's third term but at the same time distance herself from many of his policies in the 1990s, whether it is that crime bill, or even on social issues like gay marriage and so forth. She is more wholeheartedly embracing the gay rights agenda than her husband ever did. And so, it's tough. It's no longer Bill Clinton Democratic Party and I think she is struggling a little to find her place in it.

BREAM: Alright, well we will watch that because certainly there are things that happened under President Obama's administration when she was secretary of state she is going to have to talk about. Charles, I'm going to start with you this week on our winners and losers? Who have you got?

KRAUTHAMMER: My loser of the week is Stephanie Rawlings-Blake, the mayor of Baltimore, hopelessly over her head. She says on Monday that the city of Baltimore has to give room and space to those who want to destroy. She then holds back the police reportedly, because it's only looting. And then she ends the week by taking shelter in the shadow of Al Sharpton.

My winner of the week, and I choose this because it's been a tough week and we need a little bit of light news and because I have a soft spot for large mammals, is Lola, the four-year-old Sumatran tiger who escaped her enclosure in the Oklahoma City Zoo on Thursday. Now, the bad news is that her moments of independence in tigering lasted only 20 minutes. They bagged her, they tranquilized her, and they put her back in her enclosure.  However, that may not have been quantity time but it was quality time, and in it she spoke on behalf of all large mammals for whom burning in their hearts is a yearning for freedom.

BREAM: OK, I literally do love Lola -- I literally just have to have you two just tell me who your winners and losers are, names only.

MILLER: Toya Graham, the mother of Baltimore. On any other day she would have been arrested for child abuse but not that day. And then Chris Christie and Martin O'Malley, Republican, Democratic candidates because they have had scandals and problems Baltimore and Bridge-gate that is really going to make life impossible.

RILEY: The winner is Elizabeth Warren because Hillary is being pulled to the left. The liberals do not trust Hillary Clinton and Elizabeth Warren is the primary opponent that Hillary fears most. The loser is the city of Baltimore. After this rioting these cities can take decades to come back if they come back at all.

BREAM: All right, thanks panel. Stick around though because we have a look at one of the unknown talents of the latest 2016 contenders to jump into the race. You don't want to miss Senator Bernie Sanders.