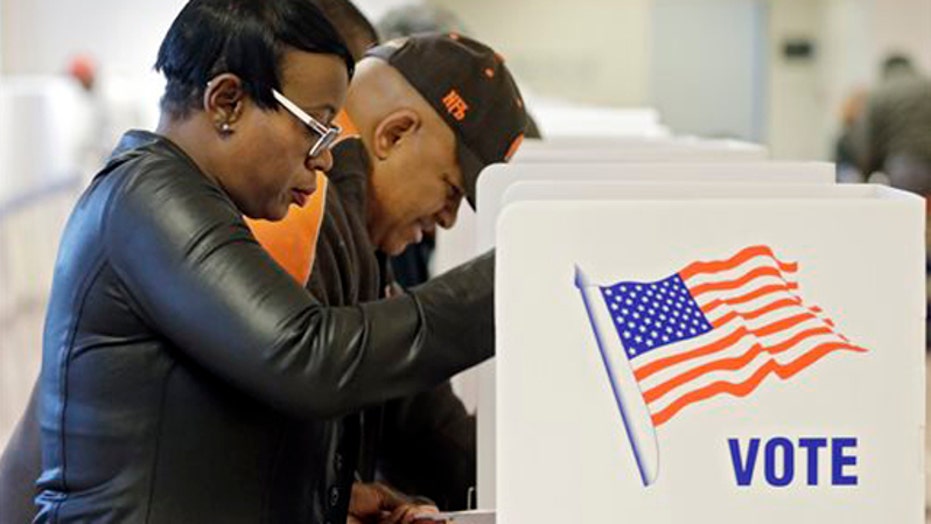 Races that could shift the balance of power in the Senate

This is a rush transcript from "Hannity," October 7, 2014. This copy may not be in its final form and may be updated.

SEAN HANNITY, HOST: We continue our countdown to Election Day to 14 -- we're only 28 days away -- and a look at the races that could shift the balance of power in the U.S. Senate. Now, Democrats are fighting to hold on to their seats in several states, and in an effort to do so are distancing themselves now from President Obama and his disastrous policies.

However, we did some investigating, and the truth is the following six candidates voted with Obama almost all the time in 2013 alone. Take a look.

So how big a factor will all those number be come November the 4th?  Here to discuss is pollster Frank Luntz. How are you, sir?

HANNITY: Brown is about -- if you look at the Real Clear Politics average, he's down about four points. Are you saying he's still in that race?

LUNTZ: He's absolutely in that race. In fact we did some ad testing.  I don't know if you've got it, but he's now used the issue of immigration and Shaheen's support of amnesty against her, and I think that that's had a significant impact over the last three, four weeks as Brown has continued to shrink that lead.

LUNTZ: It's significant. And in the races that you mentioned, in places like Louisiana and Arkansas, I believe that it is the deciding factor in why those seats are likely to shift to the Republicans. In states like Colorado, Iowa and North Carolina, states where Obama won by a narrow margin, he's no longer the asset that he once was.

And even in a state like Alaska, which is completely outside the lower 48, as they would say, it is the linkage between Begich and Obama that is at this point likely to cost Begich that seat. So, people are angry with him because he doesn't show up to vote, and they're angry with him that when he does he only votes the Obama position.

HANNITY: So if the Republicans as is predicted take Montana, South Dakota, West Virginia, expected, Mark Begich is down five in Alaska, Mark Pryor and Mary Landrieu go down, then you've got Joni Ernst, who is winning by a few points in Iowa. That looks like a good chance for a Republican pickup. You're saying New Hampshire is still in play. Then is Kay Hagan going to hold on? I'm surprised that Kay Hagan is doing as well as she's doing. She's up by about three or four points.

HANNITY: She votes with Obama 96 percent of the time. That's not moderate.

But Sean, your viewers need to follow one other state, which is Kansas. This is the most vulnerable Republican in the country.

LUNTZ: Kansas has voted -- Pat Roberts -- has voted for John McCain and Mitt Romney overwhelming. It's been a landslide there. Roberts is even losing Republicans. And what I don't know if Kansas understands is that they could actually give Barack Obama his majority in the Senate if they throw Pat Roberts out.

HANNITY: Orman is an independent. They asked the Democrat to bow out of the race. He wouldn't even say up until recently who he would caucus with. We all know it would be the Democrats. So, he's a bit of a Democratic plant. He's been avoided taking any tough positions even on the Keystone pipeline. I'm surprised that Roberts is still in that much trouble, but you're right, he's in trouble.

Let me run something for you. Some have suggested that Mitch McConnell might be in trouble. He has nearly a five-point lead in the Real Clear Politics average online. Project Veritas and James O'Keefe, they did some undercover work, and basically everybody that surrounds Alison Grimes is saying she's a liar on the issue of coal. This has only broken in the last two days. These are the two videos today and yesterday. Let me ask you if you think this will have an impact. I'll roll this tape.

PV INVESTIGATOR: I've seen the ads where Alison is up there talking about how she supports the coal industry. I started thinking to myself --

JUANITA RODRIGUEZ, WARREN COUNTY DEMOCRAT OPERATIVE: She has to say that because in Kentucky if you don't support the coal industry you're dead politically. And I know that that's true. And I know that's why she has to say that. But you know what, politics is a game. You do what you have to do to get to point B.  And then you do -- I mean, it's a lying game, unfortunately.

ROS HINES, FAYETTE COUNTY DEMOCRATIC OFFICE: So she's saying something positive about coal because she wants to be elected?

UNIDENTIFIED FEMALE: And in the state of Kentucky if you are anti-coal, you will not get elected, period, end of conversation.

NIKO ELMALEH: No, she's going to (BEEP) them as soon as she gets elected.

ELMALEH: Yeah. Take my word for it.

Can I have your card?

Take my word for it. She's going to do what he has to do to get elected and then she's going to (BEEP) them. OK, trust me. She's a killer

HANNITY: I predict this will have a big impact on that race. True or false?

LUNTZ: Let's go further than that. The fact is Mitch McConnell is going to be the next senator from Kentucky. Call it now. If I'm wrong, throw me off your network. McConnell has run a very effective advertising campaign. He's proven that he's important for the people of Kentucky.

Now, she's had some good ads, but when they said "end of story," there's one thing I know from Kentucky voters, which is that they absolutely reject dishonesty. When you are so cold and calculating that you will say absolutely anything to get elected, even things that you don't believe in, Kentucky will say to you absolutely, positively no way.

She's going to be punished for this, but it's not just her failure. It's McConnell's demonstration -- even though they're anti-incumbent in Kentucky -- his demonstration that he takes care of people, that he solves constituent problems. He's going to get reelected.

HANNITY: And she's running this ad now where she's accusing McConnell of taking money from the anti-coal groups. Let me put up the Washington Post. They actually gave the Grimes ad four Pinocchios, which means that's kind of the biggest lie that you can tell.

LUNTZ: Everyone knows where McConnell stands. It's part of the positive about him and the negatives, that he's been around for a while.  You can't lie about McConnell's record and get away with it. You can't lie about coal and get away with it. But Sean, there's a bigger issue here, which is that people will now say anything to get themselves into office.

All right, give me your last predictions. How many Republican pickups? What's going to be the number in January?

LUNTZ: If the election is held today, it's going to be really narrow, but the GOP will end up with 51 seats. I actually think it's more likely that they end up with 50 than 52, but at this point they get the majority.  It's up to Republican voters in Kansas to determine whether Barack Obama will have a Democratic Senate. They need to take that to heart.

HANNITY: All right, Frank Luntz, good to see you.