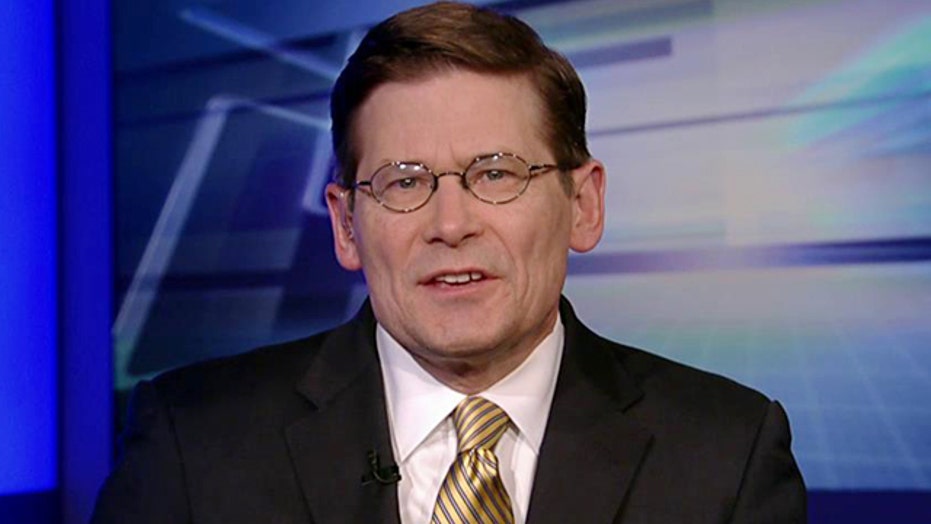 This is a rush transcript from "On the Record," May 12, 2015. This copy may not be in its final form and may be updated.

GRETA VAN SUSTEREN, FOX NEWS HOST: Right now, every day the threat gets bigger. We are talking about ISIS, those savage terrorists. They are right here on U.S. soil, targeting and recruiting Americans.

And just recently, two ISIS inspired gunmen trying to cartoon contest in Texas. A Virginia woman sentenced for helping support ISIS, including trying to hook her boyfriend up with ISIS. And in New York, two women accused of plotting to plant bombs and wage jihad.

And, of course, this -- Secretary of Homeland Security Jeh Johnson sending this urgent warning.

JEH JOHNSON, SECRETARY OF HOMELAND SECURITY: We are very definitely in a new phase in the global terrorist threat, where the so-called lone wolf could strike at any moment, which is why the FBI, in my judgment, has done an excellent job of interdicting those who are attempting to travel to Syria, who commit overt acts, and furtherance of material support to terrorism.

VAN SUSTEREN: And joining us, Mike Morell. He served as both acting CIA director and CIA deputy director and wrote the new book, "The Great War of Our Time: The CIA's Fight Against Terrorism From Al Qaeda to ISIS."

Welcome, Mike. And listening to Secretary Johnson, is ISIS here in the United States and are we doing enough?

The other is the ability to direct lone individuals, probably people who went to Iraq and Syria to come back and to conduct acts.

So, that's what ISIS can do today, Greta. But if we don't stay focused on these guys, if we allow them to maintain safe haven in Iraq and Syria, then, in time, they are going to be able to come here and conduct a 9/11-style attack.

VAN SUSTEREN: All right. Let me go to your book now. I must admit I'm a little bit confused. I want to go back to Benghazi --

VAN SUSTEREN: -- and the whole business about this video. Benghazi was September 11th, 2012. When did you first conclude that it wasn't a video that provoked this attack on the consulate and the CIA facility in Benghazi?

MORELL: So, Greta, it was on the morning of the 13th that our analysts produced really the first definitive piece that they wrote on the subject. And nowhere in that piece did they make a reference to the video.

MORELL: What the analysts said that morning was that the attack in Benghazi was probably inspired by the people in Benghazi watching what happened in Cairo earlier in the day and trying to do the same thing in Benghazi against the State Department facility there.

VAN SUSTEREN: All right. So, explain to me, if that happened as late as September 20th, 2012, when President Obama is doing a interview with Univision which is nine days later and about that time going on David Letterman and he is still going -- he is still hung up on this video thing.

I mean, didn't the CIA -- didn't y'all talk to the president and say, look, it wasn't a video at Benghazi? Why was he still going out and saying this?

VAN SUSTEREN: Well, was it the video?

MORELL: Who knows, right? We still haven't gotten -- one of the really frustrating things here, Greta, is we have not got our hands on the vast majority of people who killed Americans that night, right? We have captured one of these guys and brought them back to the United States. He's going to stand trial.

VAN SUSTEREN: All right. Do you believe it was the video that provoked Benghazi? Do you?

MORELL: So, I will stick with my analysts, right? Because that's the best I can do, right?

VAN SUSTEREN: And they didn't.

MORELL: And what my analyst said was probably they watched what happened in Cairo and wanted to do the same thing in Benghazi. So, it was a mimic attack.

VAN SUSTEREN: All right. Well, here's what your book says at page 206 and I should note that our analyst never said the video was a factor in the Benghazi attack.

So, who came up with it because your analyst never said it and they are the ones looking at it?

Actually, told her to blame the attack on the video. Not on a failure of policy.

VAN SUSTEREN: All right. When you heard that, or heard that she did that on that first Sunday, and your CIA analysts are saying that the video, they never said the video was attack. I would have thought that somebody would have gone to Susan Rice and would have headed President Obama off at the pass before he went on Univision nine days later and to Letterman and everything else.

I mean, that's what is so confusing is that you guys seemed confused.

MORELL: Yes, Greta. Look, when you are working the CIA, you are not watching what senior U.S. government officials are saying on TV. You know, you are watching what's going on overseas. That is where your focus has to be.

And it was not only focused on what was going on overseas, but we were focused on trying to prevent the more violence and more damage to Americans abroad. There were protests happening all over the Middle East. And so our focus at that point was looking forward. It wasn't on looking backward.

VAN SUSTEREN: But you didn't even see Benghazi coming. So, you couldn't have been looking too much in advance of 9 -- I mean, you guys got caught with your pants down on Benghazi. Did you see that coming?

VAN SUSTEREN: Did you think then that maybe the embassy in Benghazi, the consulate rather, should have been beefed up for security?

VAN SUSTEREN: Then who -- then why wasn't it? If you guys are all watching it and you see it's coming and you are pointing at it and so now why do we have a situation where we have a consulate that's virtually unprotected.

MORELL: So, Greta, two different facilities in Benghazi, right? There is a State Department facility and there's a CIA facility.

MORELL: OK. My guys, right? My security guys at kind of mid levels saw the changing security environment in Benghazi, said to themselves, let's take a look at the security at our facility. They looked at it. They said it's not good enough. And they upgraded it. They upgraded it significantly.

VAN SUSTEREN: But why don't they -- why didn't they do it at the consulate? Look, if I got word that I'm in danger and I got a colleague down the street in the same danger, even though I notify that colleague and say, you better -- you know, you better watch out. So, are you saying I know that your CIA facility in Benghazi had a lot of security, but does that mean that you ignored the fact that the consulate was basically naked?

MORELL: So our guys, our security guys on the ground in Benghazi were in constant contact, constant discussion with the State Department guys in Benghazi.

VAN SUSTEREN: Well, who said no then? I mean, if they are looking for more security, who did they ask and why didn't they get it? I mean because, you know, if they were on the ground saying we need more security, the CIA guys down the street at their facility they got a lot of security.

So, if they are looking for more security, when did they ask and who said no?

MORELL: So, Greta, these are all great questions, but you are asking the wrong guy, right? I was worried about my facility in Benghazi. That's what my guys were focused on.

VAN SUSTEREN: How could you not be worried about these other guys, too, even if it's not yours? I mean, how could you not -- I mean, if CNN down the street has got someone dangerous in a dangerous position and I'm at FOX News, I at least call down to the CNN and say, I would think, and say get out of there.

VAN SUSTEREN: Who was responsible?

MORELL: The State Department was, Greta.

VAN SUSTEREN: When you say the State Department, who do you mean? Are you hanging it all the way to top to Secretary Clinton or somebody else? I mean, somebody is responsible.

MORELL: So, you know, there are -- it's different levels of the State Department. Let me tell you what happened at CIA, right? At CIA --

VAN SUSTEREN: No, I got it, you had security. I got it.

VAN SUSTEREN: Yes, so are you saying that ones at the consulate did not and frankly some of the CIA guys very bravely left the CIA to go over to try to save, as I recall, is that right?

You call over to you guys and say it's terrible there and I would think you would beef it up.

MORELL: I would think so, too. One of the issues here is why wasn't there better security at the State Department facility and Benghazi, absolutely. It's something that Trey Gowdy has it to get to the bottom of in his Benghazi committee.

VAN SUSTEREN: All right. Well, anyway, let me tell you, "The Great War of Our Time," it's a brand new book. I encourage the viewers to read it. It's a fascinating read.

Sir, thank you very much for joining us. I'm sorry I was a little rough on you.

MORELL: No problem. Good to be with you.