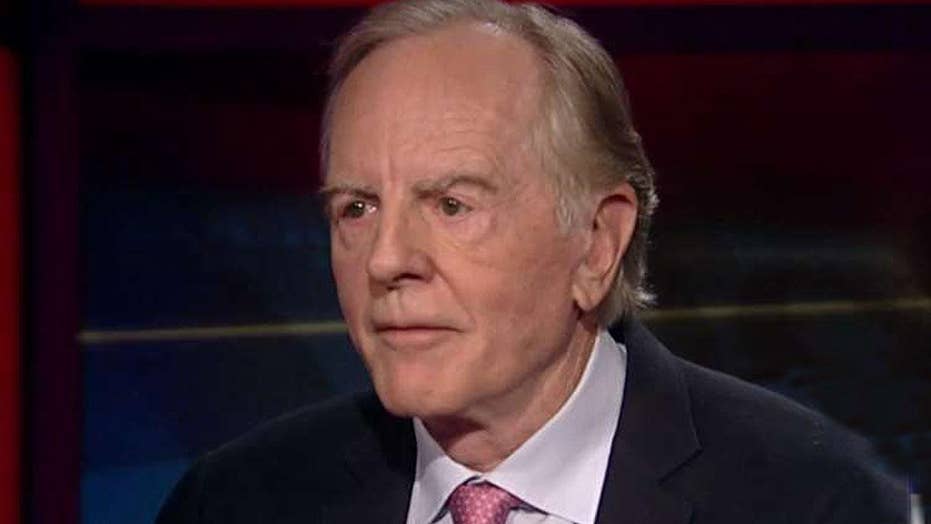 This is a rush transcript from "Your World," May 11, 2017. This copy may not be in its final form and may be updated.

NEIL CAVUTO, HOST: All right, word that Apple is investing a billion bucks in a data center in Nevada.

And I only mention it, John, with you here because you're doing other bigger, cooler things now, but that that seems unusual, because that seems to be doing exactly the kind of thing that Donald Trump wants to see. Yet Tim Cook and the president are hardly on the same page.

Is this a quid pro quo? What did you think?

JOHN SCULLEY, CHAIRMAN, RXADVANCE: Well, data is the most valuable resource in the world today. And you see what Amazon and Google and Facebook are doing building data centers as fast as they can.

CAVUTO: But this is one here. And then the president is very big on do more stuff here. Apple is famous for shipping all that abroad.

SCULLEY: Hey, it makes total sense to build it here. Why not?

And Apple wants to expand into services, so why not? It makes total sense, I think.

CAVUTO: I did want to pick your brain a little bit about you make of the Comey dust-up and everything else. Is it distracting? My view is, it distracts from his economic agenda. Whether you like it or not, it's going to push that back, at a minimum.

As a business guy, what do you think?

SCULLEY: Well, here's what I think as a business guy. I'm not a politician.

As a business guy, I believe that every president, including this president, needs a COO. Jim Baker was a COO for President Reagan.

He needs to have somebody who is experienced in the White House that get things done, helps him avoid these unforced errors.

CAVUTO: Well, he has a very good Cabinet. You're talking his immediate advisers aren't...

SCULLEY: The Cabinet is terrific. He has got a terrific Cabinet.

And he needs to have something comparable to that in the White House, where they're not making the announcements, as they did with Comey, where he sees it on the television, or where they put out the immigration policy. You remember they filed a draft. And it wasn't well-thought through.

CAVUTO: Well, I understand what you're saying.

There's an argument the president couldn't win no matter when he fired Comey, and he has the perfect right to do that, but that the timing of this was bad. If you were advising him, would you have done it now?

SCULLEY: Well, I would have advised him. And he knows this. He's built buildings all over the world.

SCULLEY: He understands execution is where business, where the rubber hits the road.

And it's no different in government. You have got to be able to execute, but you're doing it in front of the whole world. So, I think they could have done a much better job on execution.

CAVUTO: But it's not the people he has now.

SCULLEY: That's up to his -- his choice.

Your latest undertaking is RxAdvance. What is that? Explain.

What RxAdvance is doing is going in and introducing digital transparency into the entire care continuum of the health care system. We have got in one bucket the most expensive patients who are the chronically ill, about 5 percent of the population, $1.5 trillion of expense.

And there's not good coordination between the physicians. Maybe they have nine different chronic care diseases, taking 15 to 25 pills a day. There needs to be a lot more coordination with actionable analytics.

CAVUTO: So, to avoid all the overlap and the redundancies.

McKinsey Global Institute estimates $450 billion of potential savings every year, every year. That could more than pay for health insurance the -- every American.

CAVUTO: Well, who is friendlier to this type of technology, the ObamaCare plan or what the Republicans are cooking up?

SCULLEY: Well, I think Obama plan made a big mistake, as they did with a lot of things they did, where they looked to regulation as being the answer for everything.

And the reality is that, in ObamaCare, there are federal mandates, which are the 10 essential benefits, controlled at the federal level, which are not required in every state. So, giving the states more responsibility and authority makes total sense, particularly for Medicaid.

CAVUTO: All right, are you worried when you hear that Aetna now is going to be out of these exchanges by next year? They're running out of -- people forget, with ObamaCare, the way it is now, it's not sustainable math-wise, right?

SCULLEY: We have already seen UnitedHealth pull out. Aetna says they're pulling out.

These exchanges were badly conceived. It was kind of the default position, when they couldn't get single-payer system in. So they created the exchanges with the assumption that turned out to be totally wrong that young people would balance the older risk pool. And it just didn't work.

And these health insurance companies are losing hundreds of billions of dollars. So, we need something much better-thought-out.

CAVUTO: Both sides need to talk to entrepreneurs.

CAVUTO: Which I guess would be you.

John Sculley, the former CEO of Apple, now RxAdvance, this guy's mind is always percolating. I would just, like, maybe watch TV for a little bit.