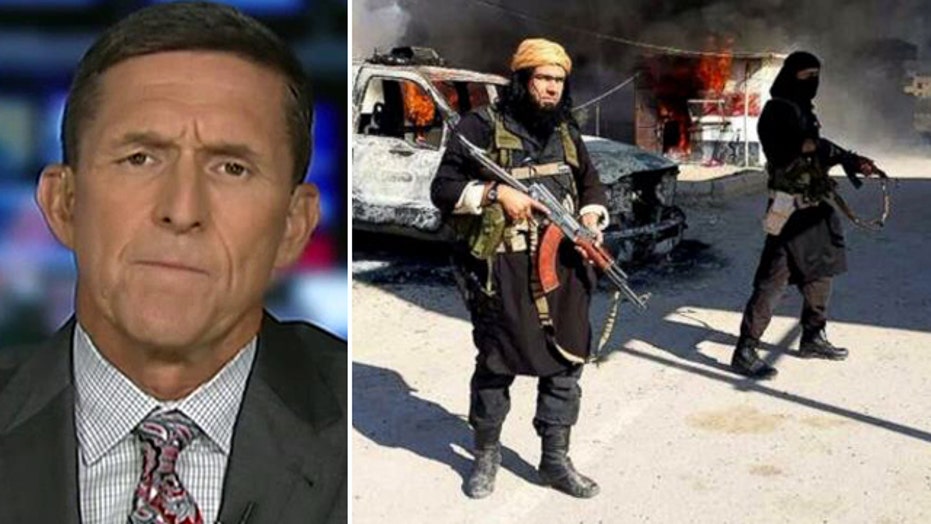 US SENDING 450 MORE MILITARY ADVISERS AND MORE EQUPTMENT TO IRAQ

STEVE FORBES: This is a strategy that is not working. ISIS is winning. You put it all together and the impression over there is that we are not serious.

BRUCE JAPSEN: This whole thing--I don’t want to be over there at all. It is a never ending quagmire. If you are talking about sending a few hundred more advisors to train and assist Iraqis so they can figure it out on their own that’s better than the 15,000 troops President Santorum is talking about.

RICH KARLGAARD: Clearly Obama’s heart is not in this. He signaled that when he called ISIS the JV team. You can’t win with a half-hearted effort. I think he is trying to run out the clock.

JOHN TAMNY: I think it’s a reminder to stop wasting lives and money on such a backwards part of the world. We flatter a non-entity like ISIS when we take it so seriously. Stay out. Implicit in this argument is that the replacement for it will be Thomas Jefferson peaceful types.

ELIZABETH MACDONALD: You can’t leave it to let them fight it out amongst themselves. These are religious Nazis we need to wipe them off the face of the earth. Also watch the reports coming out of India and Australia- they are very concerned that ISIS wants to get its hands on a WMD.

RICH KARLGAARD: Free trade is an engine of global prosperity but it does make demands that you have to improve what you do- you do have to be adaptable to changes in the global economy. Unions are the opposite. They kill adaptation and innovation with their rigid work rules, they are to blame.

ELIZABETH MACDONALD: I believe in free trade. I do believe the trade bill will create jobs in the long term but there will be pain in the short term.

JOHN TAMNY: The union ad makes the argument for free trade. Baltimore became a rich city because it was globally engaged with the world in commerce. Free trade presumes you have the most talented individuals on earthy vying to serve your needs.

STEVE FORBES: The reason isn’t free trade, it is the crushing taxes, crummy schools, regulations that drive out businesses, hostile atmosphere, and incompetent government. NY was going in that direction 20 years ago- we cut taxes, got better policing and the city prospered. Baltimore’s fate is in its own hands.

MIKE OZANIAN: What is underreported is that Baltimore has had a very serious heroine epidemic. It is tough to get any economy going under those circumstances. This fast track bill that is being worked on is not about free trade, it is about give away to big corporations and giving the President more power on immigration.

SABRINA SCHAEFFER: The fact is with trade there are 2 sides to the leger. The other side is that in a functioning economy we need to have access to affordable goods. And that is something free trade provides.

SABRINA SCHAEFFER: That law is important but we need a tax free zone. New net neutrality laws have made it easier to tax the Internet. Government does this since we are all reliant on the Internet.

RICH KARLGAARD: Physical places have some argument that they are taxes and Internet isn’t but the answer is to lighten the load of the stores and not tax the internet.

ELIZABETH MACDONALD: Tax happy Dems who wreck their local economies. Do not touch the Internet.

STEVE FORBES: This bill is a good first step in the right direction but we need to go further. We have an anti-Internet group in Washington.