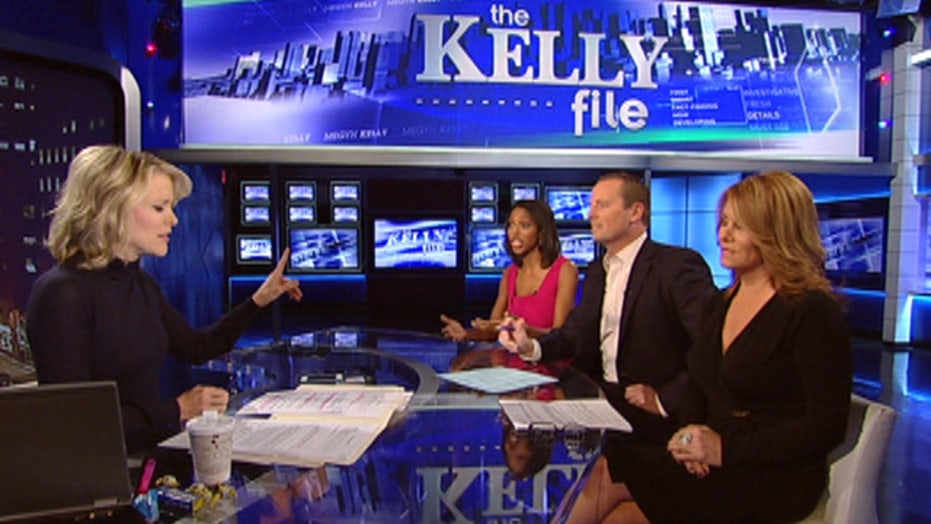 Panel sounds off on hot topics

This is a rush transcript from "The Kelly File," December 6, 2013. This copy may not be in its final form and may be updated.

MEGYN KELLY, HOST: Well, that was a clip from the newest installment in the hit movie series "Hunger Games." The lead character carries a bow and arrow through much of the film, and it is so popular that there are reports it is single-handedly boosting interest in archery across the country. But now we are hearing a story about a 5th grader just suspended and facing possible expulsion for playfully firing an imaginary arrow at a classmate.

So we have a few hot topics to get to. That's the first one. It's the sign for Virgo basically. Now if you flash it, you get suspended and maybe expelled.

JONNA SPILBOR, CRIMINAL DEFENSE ATTORNEY: Ridiculous. Here's how ridiculous it is. If we are going to punish this poor kid for pretending to shoot a bow and arrow, let's ticket his parents for parking their unicorn in a fire zone. That's how dumb -- there is no cupreous to this crime, this event, Megyn. Why -- let's not forget the kid is 10. We encourage them to use their imagination.

KELLY: It going to be on his permanent record.

KELI GOFF, DAILY BEAST COLUMNIST: Can I just say, I'm so grateful I'm not growing up in this age of insanity, political correctness run amok because I clearly would have been busted for that Wonder Woman uniform I was rocking because that would have been too threatening and intimidating for my classmates, so I'm very lucky I don't have that on my record.

KELLY: That's true. This kid is actually facing possible expulsion, Rick. There is an appeal being made on his behalf, but they have not reversed this decision in any way.

RICHARD GRENELL, FORMER SPOKESMAN FOR FOUR U.S AMBASSADORS TO THE U.N.: We need to say the name Rah Cuffman. She's the principal. Come on. This is ridiculous that you would punish someone. You're punishing someone for imagination. We should be celebrating imagination. We should be celebrating when people want to do something that doesn't have a gun.

KELLY: He didn't actually hurt anybody. He didn't have a weapon. He thought about one and made a motion. That's what it is coming to now.

Let's move on to another story that's been raising some eyebrows. This baby seat. Now I have a 4-month-old. That's about the size you are looking at. It's called the newborn to toddler app-tivity seat for iPad device by Fisher-Price. I guess if you don't want to speak to your child.

GRENELL: I love this.

KELLY: You love it?

GRENELL: I love it.

GRENELL: I don't want to ban anything. I think this is fantastic that mothers would have something that can be really easy for their child to do. I mean, what's the difference between this and the little thing that hangs over them and they can play with it? It's still interactive.

GOFF: I think those of us who are adults are actually on gadgets and screens way too much, and the date seems to confirm it. It's really bad. Messing up our sleep patterns, how we communicate with each other and so the idea that we should be starting younger, I think we should actually be using less of this stuff, not encouraging younger people to use more. And for kids under two, the American Academy of Pediatrics says it's bad.

KELLY: interactive screens, and they don't like screens or TV either unless it's 9 p.m. on Fox News Channel. But the thing is, when you put the little toy in front of your child on the car seat, he pulls it, hits it, looks at it maybe thinks about it. But then he looks out the window, looks at mommy. This is all look at the big, you know, Mickey Mouse or whatever. Does it take away the opportunity for imagination?

SPILBOR: You know, am I the only nonparent on the panel? For me to have a kid, I would need an app for that.

SPILBOR: We have the technology. Why not have the children --

GRENELL: Some parents need it.

GOFF: Going back to the first story, imagination is a great thing. I was reading a study that said boredom is good for kids. I became a writer in part because I was left to my own devices to come up with stories.

GRENELL: Can you not have imagination watching an iPad? I think you can have better imagination than that little toy hanging there.

GRENELL: Because it's more interactive.

KELLY: You don't fill in the blanks, you just look at the face changing. You're talking about an infant.

GRENELL: Much more interesting than a hanging stuffed animal.

KELLY: If I'm in the car with my child and he starts crying then I start singing -- not present day -- or do something to interact.

GRENELL: Now you're a distracted driver.

KELLY: My child needs me. Now it's turn the channel, honey. Turn on little Einstein. You'll love it.

OK, let's move on. There is a study out that modern men are starting to up talk. That's when you rise in pitch at the end of sentences. We went through the show last night and pulled a clip from every man who was on. Watch.

ED HENRY: They really know nothing about this law.

TRACE GALLAGHER: It's not nearly enough.

ARTHUR AIDALA: So happy they put handcuffs on you to put you in jail!

KELLY: How brilliant was that? What does it mean? He's starting to become a valley girl?

SPILBOR: Identifying with women way too much.

KELLY: Who did the study? University of California San Diego linguist, Amanda Richard, who presented the findings at the annual meeting of the Acoustical Society of America. Not a member?

GRENELL: Did one penny of government funding go into this? This is ridiculous.

KELLY: They needed to know, Rick. They had to find out because they said their study bust s the stereotype associate with up talk, actually ask questions instead of make statements. We had the debate last night.

KELLY: No one cares.

GOFF: This is the hot issue in Congress right now, Megyn.

KELLY: Why is this necessary? They are trying to find out whether men are losing the authority in their voices because there was a Duke University study out recently that said CEOs who speak in lower voices without the up talk make more money than their counterparts.

SPILBOR: I would agree with that. I think same goes for women, maybe not today. You have one of those perfect female voices. It's not pitchy. Not too screechy. Today it's very sexy, but I think in general when you are getting sold something, for example. Here's what I see the most. You are getting sold a car, a house and a man is talking to you as a woman. I see them trying to talk more like they think women talk with the up talk. That irritates me to no end.

GRENELL: This is nice to know vs. need to know.

GOFF: Do you remember when that Kirsten Gillibrand first came on the scene and there was talk about her voice and whether it would hinder her career? So this kind of stuff actually does matter, even though I think it's pretty silly.

KELLY: The study at Duke University showed those with deeper voices have a distinct advantage over high- pitched peers, they are found to earn more. Lower pitched voices are linked to dominant behavior, which I couldn't help but think of this little chestnut when I read that. Watch that.

KELLY: What makes you dominant and me submissive? And who died and made you scientist and chief?

KELLY: Maybe Erick Erickson was on to something, maybe I am dominant because I have a lower voice, thoughts?

GOFF: You were in that clip.

KELLY: Thank you. Hopefully it results in a bunch more money because the study says it will. Panel, thank you.