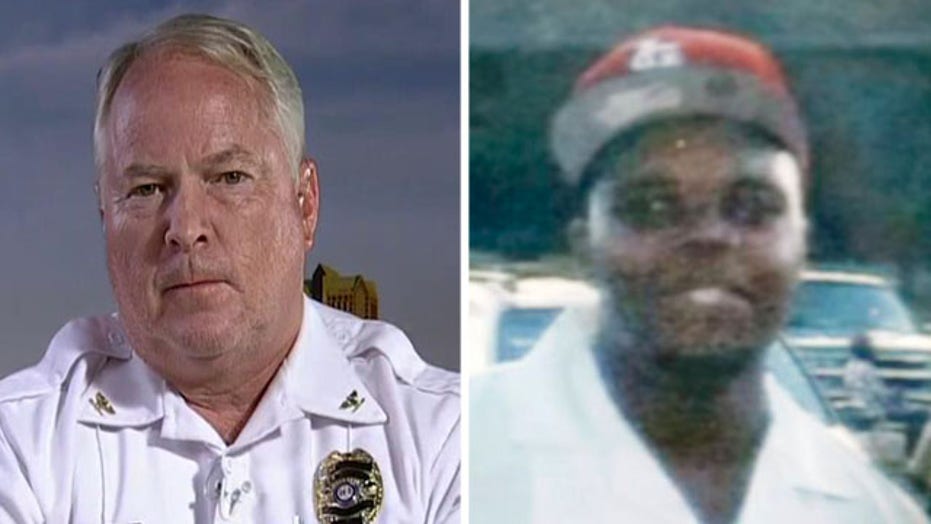 This is a rush transcript from "Hannity," August 13, 2014. This copy may not be in its final form and may be updated.

SEAN HANNITY, HOST: Controversy continues to swirl in Ferguson, Missouri, tonight around the shooting of Michael Brown, an unarmed black teenager who was shot multiple times by a Ferguson City police officer last Saturday. Now, a friend of Michael Brown who says they witnessed the shooting said that he was gunned down in cold blood. Take a look at what he said.

UNIDENTIFIED MALE, SHOOTING WITNESS: As he was running, the officer was trying to get out of the car. And once he got out of the car, he pursued my friend, but his weapon was drawn. He didn't see any weapon drawn at him or anything like that, us going for no weapon. His weapon was already drawn when he got out the car. He shot again, and once my friend felt that shot he turned around and put his hands in the air and he started to get down. But the officer still approached with his weapon drawn and he fired several more shots.

HANNITY: Joining me now to give his insight into what happened on that fateful Saturday afternoon, Ferguson City Police Chief Thomas Jackson.  Mr. Jackson, welcome to the program. Thank you for being with us.

THOMAS JACKSON, FERGUSON, MISSOURI, POLICE CHIEF: Thank you for having me, Sean.

HANNITY: I read your public comments. They differ dramatically from what we just heard, and that is you said in fact the officer was injured, had a facial wound of some kind, and that in fact a struggle ensued over the officer's weapon and a shot was actually fired inside the car. Why is there such a dramatically different story being told here?

HANNITY: Well, either a shot was fired inside the police officer's car or it was not. Do we know for a fact --

JACKSON: It was, yes.

HANNITY: That is a fact then. So there was a struggle for the gun.

JACKSON: That is a fact.

HANNITY: Are there witnesses that will say that there was a struggle for the gun?

JACKSON: I can't talk to what the witnesses are going to say. And the reason for that is as soon as this happened I called the county police chief and asked him to take over the scene and the investigation so I could be certain that there was no appearance of impropriety, and I would know that a very thorough and complete investigation would be done and we could get to the truth of what happened.

HANNITY: Can you shed any light on why so many shots were fired?

JACKSON: No, I can't. I don't actually know how many were fired at this time.

HANNITY: Do you suspect, as has been reported, 10 shots or more?

JACKSON: It's possible that that many shots were fired, I don't know.

HANNITY: I assume you found shell casings, you know a certain amount.  Do you have a range in which you know?

JACKSON: No, I can't talk to the evidence at all. That's the St. Louis County Police Department's investigation.

HANNITY: I understand that the police officer, there's been a lot of death threats against him, a lot of volatility. You've got the New Black Panther Party, Louis Farrakhan has spoken out, the Reverend Al Sharpton is there. You've had the chanting, have a sign up there, "The only good cop is a dead cop." There's been rioting and looting, et cetera, going on.  That has prevented you from releasing the name of the officer. Some have questioned whether the wisdom of that, the public's right to know versus the safety of the officer. You're balancing that?

JACKSON: I am. And that's exactly what we did. You know, we had originally believed we had an obligation to release that information to the public and to the press. But what happened is another officer's name was released as being the officer involved in the shooting. He was not. But his picture was put up on the Internet, his Facebook page was hacked, and death threats started coming in.

So that's when we waived the benefit of releasing the information right now versus the safety to the officer, his family, and his neighbors, and the rest of the police department. So we decided to delay the release of the name.

HANNITY: Let me ask you this one simple question. Based on your preliminary investigation and you speaking with other officers that were on the scene as I understand it, correct?

HANNITY: Then are you convinced that the officer involved in the shooting was within department guidelines in protecting himself?

JACKSON: I can't answer that question until I have the final report from the county. I really don't want to say anything that I might know or that I think. When I say something, I want to say what I know.

HANNITY: But you are certain that an altercation occurred and a shot was fired within the car, meaning Mr. Brown was in the car at some point?

HANNITY: In other words, he wasn't handcuffed in the car. He went in the car of his own volition.

HANNITY: And do you believe there was a struggle for that gun?

JACKSON: That's what the county police chief said in his opening statement. He's the one that took the -- his officers are the ones that took the statement from both the officer and the witnesses.

HANNITY: What about the unrest that has taken place now in your city?  Do you believe a lot of the looting and a lot of what has happened is a result of outside agitators, as some have suggested, or do you think this is just a community angry at what happened?

JACKSON: No, it's a lot of outside agitators that are causing the violence. We've had some -- several very peaceful protests. I mean, they're angry. They want -- they have questions they want answers to. And I understand that. I get that.

But we've had -- the community has now stepped up. Once this violence happened, our community leaders, the clergy, some of the activists have stepped forward and said enough is enough, and they're taking the lead on the protest. They're going to continue to protest, but they want it to be peaceful.

HANNITY: All right, chief, thank you so much for your time tonight, and we wish your community the best, really do, in every way.

JACKSON: Thank you very much.