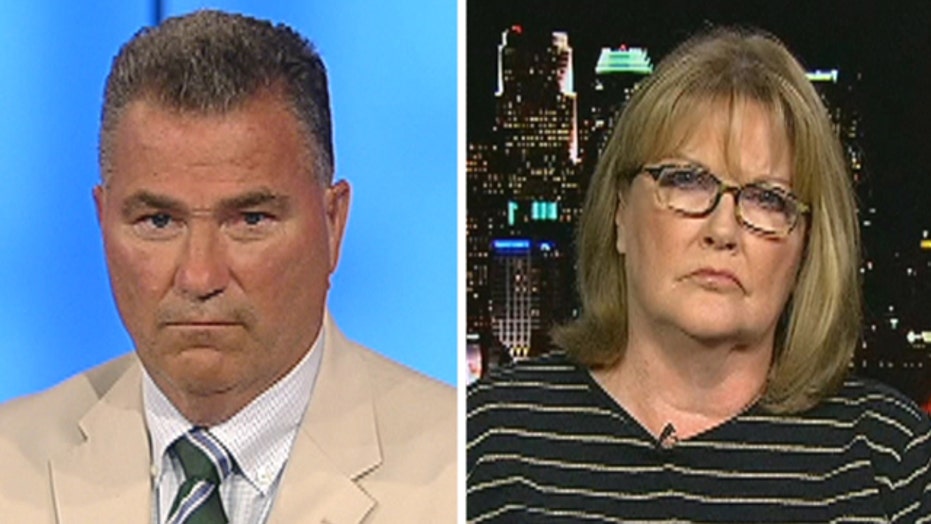 Bill Clinton admitted he had the opportunity to kill Bin Laden

This is a rush transcript from "Hannity," August 1, 2014. This copy may not be in its final form and may be updated.

We've now heard President Bill Clinton in his own words say that he had the chance to kill Usama bin Laden prior to the September 11 attacks, but he chose not to. So now we're left wondering if Clinton had recognized the Al Qaeda threat posed to America and had taken out bin Laden, how many lives could have been saved?

Joining me now with reaction is Debra Burlingame. Her brother, Charles, was the pilot of Flight 77 which was crashed into the Pentagon on 9/11. Also joining us is retired FDNY Deputy Chief Jim Riches. His son was also killed on September 11.

Welcome to both of you. Great to have you here.

DEBRA BURLINGAME, 9/11 FAMILIES FOR A SAFE AND STRONG AMERICA: Well, I happen to agree with Michael Scheuer. I think the moral vanity is fairly dripping from his voice. And remember, those words were spoken just hours before the attacks took place. I heard those words where he's talking about 300 innocent women and children, and I thought of the 3,000 -- 10 times that amount -- innocent women and children, five children on my brother's plane, that were killed a few hours later.

And let's be really clear, Monica, it wasn't just so-called innocent women and children he claims to be worried about. He pulled the operational plans to take out bin Laden because you had a hunting party consisting of the royal family from the United Arab Emirates, a Saudi prince was there at Tariq Farms, which is the location we're talking about, hunting, and he was a friend of bin Laden. Bin Laden would sometimes join him to do his hunting and falconry.

These are some of the same entities that are now donating millions, millions of dollars to the Clinton Foundation, where Hillary, Chelsea and Bill Clinton now devote all of their time and effort.

CROWLEY: Jim, you heard Michael Scheuer earlier on the show talk about the fact there were multiple opportunities for Bill Clinton. He had Usama bin Laden in his sights at least 10 times and failed to pull the trigger. You lost your son on 9/11. To you, is that an unforgivable offense?

JIM RICHES, FORMER FDNY DEPUTY CHIEF: Of course it is. And I think he was a disgraceful president. He was horrible in everything he did. I mean, they had -- if you looked at the 9/11 Commission, they had numerous times they could have got bin Laden. He didn't do it.

I was down there picking up the bodies and the body parts. A thousand people never recovered anything, my son's body and all of them crushed to pieces. I mean, they're hurt. The families had to suffer. And then they hear this today that he said, you know, I could have killed him. Two hundred people were killed in U.S. embassies in Africa by bin Laden before this, and he didn't pull the trigger. He had no guts. He was a moral coward and he was a coward for not pulling the trigger until -- like she said, they were surrounded with other terrorists in that town. And it's collateral damage.

My father-in-law was a captain in World War II. And he said when they attacked Germany, people were thrown and shooting out of buildings, they shot the building down. There was no questions asked. And that's what should have happened here.

CROWLEY: It certainly does seem that, according to Michael Scheuer, that the evidence, the intelligence, was pretty solid each time they had him in his sights and he wouldn't pull the trigger because of collateral damage. Looks like he was more concerned about that collateral damage than the thousands of lives that were at risk and that we lost on 9/11.

RICHES: Yes, and if you look on 9/11, you know, they were dancing in the streets in Saudi Arabia. They were dancing in the streets all through the Middle East. You know, that's where they should have dropped the bomb.  We should have went after them all there. And that's wrong for what they did. And I think he was wrong. He should have pulled the trigger, and he didn't have the guts. And like they have all these prisoners in Guantanamo now, I hope they don't trade them. And Hillary left those guys behind, as you said. Don't leave people behind.

CROWLEY: ... part of those trades with the Bergdahl trade for the five Taliban.

Debra, let me ask you a bigger picture question here. What does this say about our tendency in the West toward wishful thinking, that even though the enemy tells us exactly who they are, exactly what they believe and exactly what they intend to do, whether it's Bill Clinton or so many others in the 20th century and certainly the 21st century, we don't listen.  We don't take those threats seriously enough until the threat is right on top of us.

BURLINGAME: Well, I think, again, it goes to the moral vanity. We're willing to sacrifice our own children and grandchildren to prove what good people we are. And going back to this idea that you had innocent women and children, we're seeing the same kind of argument going on now with Israel targeting Hamas where innocents are killed.

I'd like to remind people that when Bill Clinton in that tape referred to it as a little town called Kandahar -- first of all, Kandahar is the second biggest city in Afghanistan. That's not what we're talking about.

We're talking about his terrorist camp, which was a terrorist training center miles from Kandahar. Everyone -- it was a military compound where thousands of terrorists trained. You couldn't get within sight of that place, it was so secure. And all the women there would have been jihadis, as well.

Remember, when our guys went after bin Laden at Abbottabad, it was his three wives that attacked the Navy SEALs first! They had to be taken down.  So I think it is utterly moral vanity.

And Jimmy's right. In World War II, you know, a lot of innocent people died at Normandy. A lot of French civilians died. But as Shah Massoud said -- he was the Northern Alliance general who was so disappointed after a two-year rehearsal of taking down bin Laden, Are there no men left in Washington? Are there no men left?

CROWLEY: Yes. You're absolutely right about that. Debra, Jim, we have to leave it there. But thank you so much. And I'm so sorry for your losses, again, on September 11. Thank you. God bless.