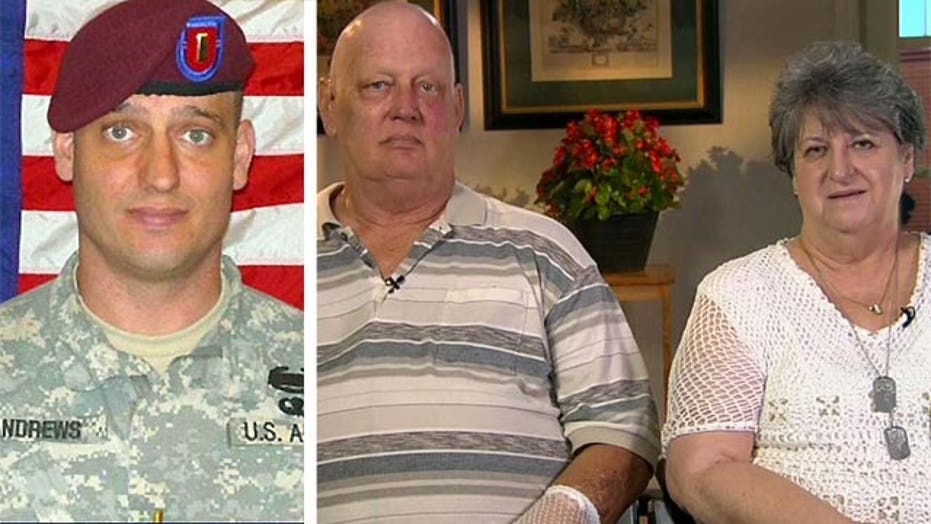 Parents of soldier who died in search respond to Obama's decision

This is a rush transcript from "Hannity," June 6, 2014. This copy may not be in its final form and may be updated.

BARACK OBAMA, PRESIDENT OF THE UNITED STATES:  We have a prisoner of war whose health deteriorated and we were deeply concerned about and we saw an opportunity and we seized it and
I make no apologies for that.

HANNITY:  All right.  That was President Obama saying, he makes no apologies releasing five Taliban terrorists in exchange for Sergeant Bergdahl but what about the six men who died searching for Bowe after he reportedly walked off the base in 2009, what did they think of their Commander-in-Chief's comments particularly now that Fox News has obtained documents proving the former captive once described himself as a warrior for Islam?

And joining us now is Andy and Sondra Andrews, their son, Sergeant Darren Andrews was killed searching for Bowe.  Thank you for being here.

Sondra, let me ask you, what is your reaction to that?  Were you ever brought to the Rose Garden by the president of the United States and contacted by him?

SONDRA ANDREWS, SON KILLED SEARCHING FOR BERGDAHL:  No, no we haven't had any communication at this point.

HANNITY:  What is your reaction to all of this now that you've learned so much about the person that your son died for?

SONDRA ANDREWS:  It's distressing.  It's really -- it makes you really question everything that went on, how do you justify a good soldier, someone that's patriotic as all these young men were including our son and you lose them searching for a  traitor, a deserter, someone that's betrayed their oath?

HANNITY:  Did anyone ever tell you --

ANDY ANDREWS, SON KILLED SEARCHING FOR BOWE:  We know some of the circumstances.  We know what happened immediately before.  I went on with the Taliban stepped out behind the wall and there and saw the RPG and warned his men and we don't know why they were stopped there.  But all we knew, they were just looking for high level Taliban.  We didn't know they were searching for this a-wall sergeant.

HANNITY:  When did you find out the true story then?

ANDY ANDREWS:  The story started coming out on Facebook and my wife received questions from friends and relatives saying, asking her if this was true, did Dan get killed hunting for the soldier?  And she followed the army line.  She said no, they did it a different way and -- but then later, the guys that were with Darren at the incident started calling her and notifying her by e-mail that it was true, and they were searching for Bergdahl when Darren and the other -- and Martin was killed.

HANNITY:  Sondra, have you listened to your son's platoon fellow platoon members this week as they have been interviewed --

SONDRA ANDREWS:  I have.

HANNITY:  And they all knew about the desertion issue and his negative comments, both about his country and about the military?  Was your reaction as more and more of this has come out?

SONDRA ANDREWS:  I think it's more evident that he was never a POW.  He was never captured.  He was a deserter.

SONDRA ANDREWS:  He left on his own volition.

HANNITY:  In your communications with your son, did either one of you remember or recall anytime that he ever mentioned Sergeant Bergdahl?

ANDY ANDREWS:  Not by name.

HANNITY:  Not by name.

ANDY ANDREWS:  Just the guy that was missing.

ANDY ANDREWS:  But we knew.

HANNITY:  Thank you.  Thank you for being with us.