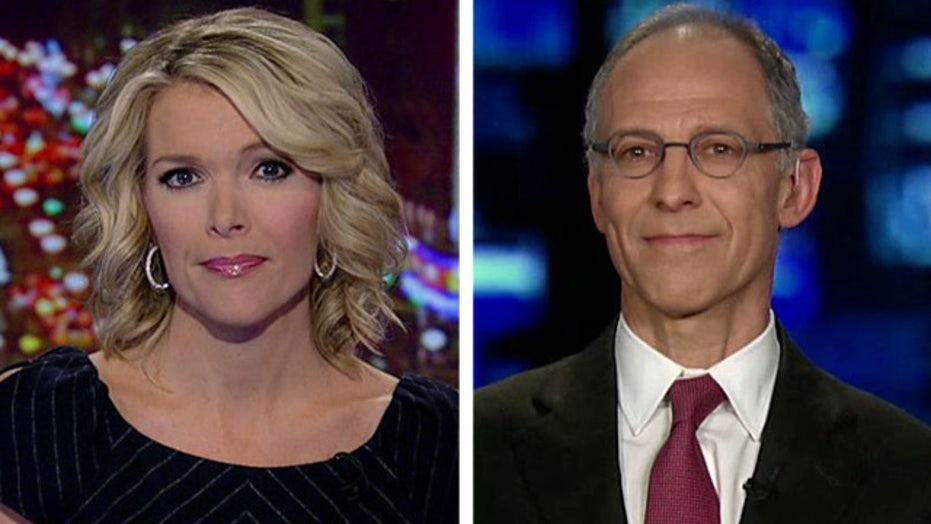 This is a rush transcript from "The Kelly File," November 13, 2013. This copy may not be in its final form and may be updated.

MEGYN KELLY, HOST: Back with me tonight, Dr. Ezekiel Emanuel, vice provost of the University of Pennsylvania, and he also served a special advisor for Health Policy to the director of the White House and Office of Management and Budget.

He's also the author of "Brothers Emanuel; A Memoir of an American Family." And his brother as you may know is the mayor of Chicago Rahm Emanuel, who is also at one time President Obama's chief of staff. Doctor, it's great to see you again.

So now we have more information, and your reaction to the latest numbers out tonight is what?

DR. EZEKIEL EMANUEL, VICE PROVOST, UNIVERSITY OF PENNSYLVANIA: Well, I think they are disappointing. I think it's not that confusing given the fact that the website wasn't working. And the publicity campaign to make people aware of it and what to do was put on hold until the website begins to work reasonably well.

KELLY: It's very concerning, but let me show you the number.

EMANEUL: I have -- can you give me a chance?

KELLY: I gave you a chance. Let's have a question and answer. The interview works better that way. Five million people have already been canceled. So I'm not talking about the 7 million who you guys wanted to sign up --

EMANUEL: That's not a reliable number.

KELLY: It's at least 3 million.

KELLY: And the reports out tonight that it's 5 million people who have been canceled --

EMANUEL: Only on Fox is it 5 million.

KELLY: OK, fine. So let's go with 3 million. You can deny the problem while you want, sir, but the data is out there.

KELLY: It's 5 million people tonight by our numbers.

If that's the case -- can we put the full screen back on the board? Then you need 156,000 people to sign up every day for the next 32 days just to break even. That's not even talking about the 7 million you needed from the get-go to make ObamaCare work.

The second point is, you have to remember in the individual market before ObamaCare the insurance companies were cancelling people all the time. That's one of the reasons we wanted the exchanges to work. I agree with you. Without the exchanges working this cancellation policy is worrisome. It was worrisome before ObamaCare. It is worrisome today. The key thing is to get the exchanges working, get the website working so those people have a place to go where they will get better insurance at a reasonable rate overall.

KELLY: There is a lot in your answer. First are you admitting it was foreseen that the individual insurance market would essentially collapse and that was a key facet of ObamaCare working?

EMANUEL: It's not a matter of foreseeing. The insurance companies always cancel policies. They did it before.

KELLY: It is a matter. That's spin. You know as well as I do that the mass cancellations we have seen are hurting a lot of Americans. They are very upset and their relationship with their doctor has been severed as a result of coverage in many instances --

KELLY: You keep down playing it, sir, but it's happened. Now you say foresee-ability is irrelevant. It is relevant. They want to know if you knew!

EMANUEL: Maybe if you would stop yelling at me --

KELLY: Did you or didn't you?

EMANUEL: You don't see that before ObamaCare those kind of cancellations happened all the time. You never covered them? They were very common.

KELLY: So to you the two things are totally disconnected?

EMANUEL: You keep interrupting. Isn't there any manners here?

KELLY: Sir, it's a back and forth. I'm not giving you the platform for a soliloquy. Are you saying the things are unrelated? ObamaCare and the 5 million -- pick your number -- of cancelations in the individual market are totally unrelated?

EMANUEL: No. I'm saying, look, the insurance industry was not forced to cancel anyone. They canceled people before. They see the individual market as going away and they are getting out of it.

KELLY: I will give you that point for the purpose of the discussion. I will go with you on that. Say that's the case.

KELLY: Did you foresee that happening?

EMANUEL: I think when you change the market, things change.

KELLY: That's not an answer.

EMANUEL: Yes, it is.

KELLY: Did you foresee it?

EMANUEL: I saw them going to the exchanges because it's better for everyone including them.

KELLY: OK, but that's different. Going to exchanges on their own because they saw it and said I like it, it's better than what I have. That is not the same as the insurance company saying, you are canceled and now you are on your own. Did you foresee that happening?

EMANUEL: That is absolutely -- they have canceled because they don't see --

KELLY: You are not answering.

EMANUEL: They don't see it as a growing market.

KELLY: You are not answering.

EMANUEL: They think the exchange is rising.

KELLY: Sir, you are not answering.

EMANUEL: I am answering. Their business decision says the individual market is dying, we are going to the exchange. That's how they are playing this.

KELLY: OK. So when the president said to the people if you like your plan, you can keep it, period, you believe he genuinely believed that in his mind? And he did not foresee the massive cancellations we are seeing?

EMANUEL: Whether you could anticipate what business would do is irrelevant.

KELLY: Stop saying that. I will tell you what's relevant to my viewers. I think I know my viewers and my viewers think this is relevant. Can't you assume for the purpose of this discussion that I'm right and give us an answer?

EMANUEL: No. I'm going to tell you. The Affordable Care Act didn't require any single insurance company to cancel a plan. They decided to do that.

KELLY: I'm giving you that for tonight.

EMANUEL: They decided for business reasons.

KELLY: I'm giving you that for the purpose of tonight. Listen, listen.

EMANUEL: They decided to do it for business reasons.

KELLY: Listen. I am giving you that. OK?

EMANUEL: I didn't say they're bad. I just said they made a business decision.

KELLY: OK. Why didn't you foresee it and plan against it and say to the American people, you need to know what's going to happen on the individual insurance market because it will be relevant to your life, your health and your children's health?

EMANUEL: Because we were offering them a better platform to buy insurance called the exchange.

EMANUEL: That was the rationale.

KELLY: I appreciate that answer.

KELLY: You have been saying today you believe there should have been a CEO in charge of the health care rollout.

EMANUEL: I said it weeks ago.

KELLY: Shouldn't that have been something the president of the United States recognized at the onset of the law?

EMANUEL: I think someone should have been in place in spring, summer of 2010. Someone should be in place today. It's very important to have a single manager who has managerial experience as insurance company experience.

KELLY: Should the president have recognized that?

EMANUEL: I think it is important. Look, I recommended it.

KELLY: OK. I know you are loyal to oh the president -- I don't want to criticize him. I don't understand why you can't just tell it to us straight. Should he have seen this? Why didn't they listen to you? Why wasn't there such a person appointed?

EMANUEL: There were differences about how they wanted to run it. They decided to run it with people in CMS having the charge for doing it.

Remember, this was not an environment which was hospitable to setting up the exchanges. You and your colleagues were constantly criticizing, trying to underfund it and make sure that didn't work.

KELLY: A lot of the criticism proved true, unfortunately.

EMANUEL: It's a self-fulfilling prophecy. We'll try to do everything we can to make it fail and then when it fails, we'll say, why did it fail?

KELLY: I don't think Fox News had anything to do with the rollout of healthcare.gov, as far as I know we didn't touch that website.

EMANUEL: You were constantly attacking the law and trying to make it underfunded.

KELLY: OK, I'll give you that one, too. It was all our fault.

KELLY: Let me ask you about health care.gov. This is what people worry about.

EMANUEL: I worry about it, too.

KELLY: If those people who lost their coverage out there, the 5 million, whatever the number.

KELLY: Three. OK, fine. Then they can't get on healthcare.gov in time to get coverage for January 1. Then you have millions of people who do not have insurance come January 1.

EMANUEL: That will be a serious problem. I absolutely agree with you. All the more reason that it is very important by the end of the month that healthcare.gov work. I have said it before.

KELLY: What are we going to do if it doesn't work?

EMANUEL: Let me tell you, Megyn, I don't think this is complicated computer science. I do think it can be done. I do think they will get it done. If they don't then they really are in trouble.

KELLY: Listen, you're fun to talk to. Thanks for being here.