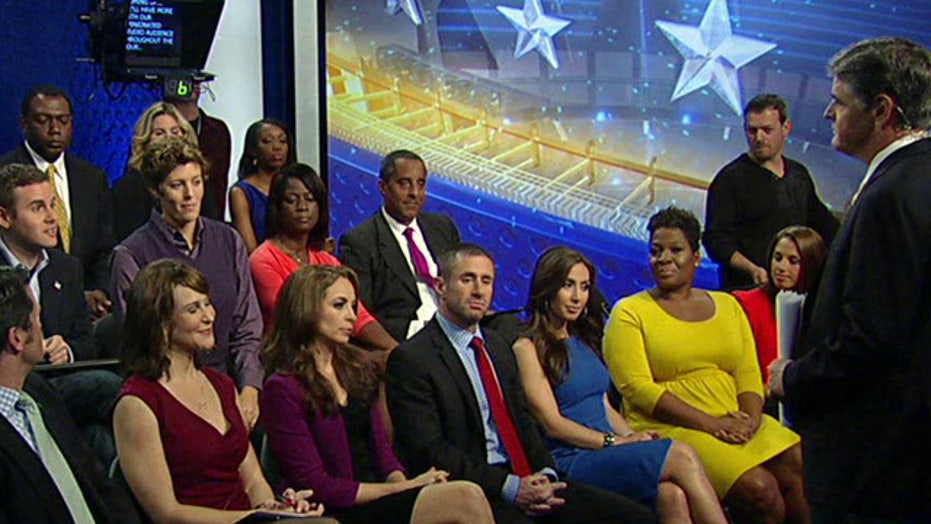 Expectations vs. reality under the Obama administration

This is a rush transcript from "Hannity," October 11, 2013. This copy may not be in its final form and may be updated.

SEAN HANNITY, HOST: The writing was on the wall. Since day one, the president's disastrous health care law has been nothing but one big headache after the other. And with comments like this, I guess we shouldn't be surprised.

REP. NANCY PELOSI, D-CALIF.: We have to pass the bill so that you can find out what is in it away from the fog of the controversy.

HANNITY: All right, guess what? The bill was passed, and Americans found out what was in it, and they hate it! Now, every day, there's another report released about companies being forced to lay off workers, families not allowed to keep their doctors, and much worse. So why should Americans have any faith left in their elected officials, and what can be done about it?

Well, according to a brand-new Wall Street Journal poll, 60 percent said yes when asked if given the opportunity, they would vote to replace every single member of Congress.

But do you agree? Now, you at home, we want to hear what you think. So head on over to Hannitylive.foxnews.com and go to Twitter @seanhannity, and you can answer our online poll.

But first we bring in this -- hello, Tamara! We're going to get to you, I promise.

All right, look at this. Poll -- 60 percent say fire every member of Congress. President has the lowest approval rating, 37 percent, than he's had. Get this. NBC poll -- most Americans think Obama's putting his political agenda ahead of what is good for the country. Poll -- Barack Obama, AP, most people see the president, handling of most issues, they say he's not decisive, our president is not strong, he's not honest, he's not reasonable.

And Barack Obama, the person that made people faint -- he's not inspiring anymore. Seventy-five percent of Americans think the sequester didn't hurt. Now it gets worse. Couple of more points, and I'll bring you all in here. $634 million taxpayer dollars we spent on a health care launch that was a disaster, 17 percent of Americans think we're on the right track, 83 percent think the wrong track. And Republicans now lead in the generic ballot poll. They lead 18 points among independents.

Jedediah, I'm going to start with you. What is going on here?

That's what you're seeing right now, lack of presidential leadership. And I think that's what sticks out in people's minds, compared to what they thought they were getting when they went to the polls for him twice.

HANNITY: Tamara, you were a Democrat. You've been critical, though, occasionally, of President Obama, a president that says he'll talk to Iran and Syria, the mullahs in Iran, the president of Iran, but he won't talk to Republicans? Are conservatives that bad?

TAMARA HOLDER, FOX CONTRIBUTOR: Well, you are. Maybe not...

HOLDER: Maybe not the people...

HANNITY: I opened myself right up!

HOLDER: But you know, there are legitimate concerns about ObamaCare, the Affordable Care Act, whatever you call it. And I think that we can all agree about that, whether you're on the left or the right.

But the issue is that we have a Democratic process here. And we want to conserve that. And so the only way we can do that is not by the Tea Party minority or the people that are trying to change this. It is through repeal the law. It is through the proper chains of government, and...

HANNITY: Tamara, you're an attorney. I got to disagree. We have -- wait...

HOLDER: Throughout that process.

HANNITY: Hang on! I'm not on your show.

HANNITY: We have a Constitution. Our Constitution has separation of powers. The power of the purse is in whose hands?

PETE HEGSETH, CONCERNED VETERANS FOR AMERICA: The president created his own problems by saying he won't negotiate. So here we are with $17 trillion in debt. We've got sequestration has hit our military in difficult ways that we have not addressed. And he's saying he won't negotiate. And in the meantime -- and I run a vets group -- he's using veterans as pawns when he's blocking the World War II memorial, he's overhyping a lot of stuff that's happening at VA. And then we saw with these military...

HANNITY: They knew it was coming.

HANNITY: I think this idea -- this is important. I we have a petulant president who's acting like a child that won't negotiate. And it's his way or the highway. Why -- give me one good reason why the president shouldn't talk to Republicans.

HANNITY: I asked you a question. I don't want you to explain.

WHITMAN: No, let me explain!

HANNITY: Why -- give me one good reason!

WHITMAN: What the Republicans have achieved with the shutdown is almost impossible. You know what it is? Support for ObamaCare is up seven points, and the Republican...

UNIDENTIFIED FEMALE: According to what?

WHITMAN: ... according to the NBC/Wall Street...

HANNITY: According to who?

WHITMAN: ... Journal poll. And also according to the new Gallup poll, the Republican brand...

WHITMAN: ... has the lowest level of favorability...

HANNITY: I asked you a question!

HANNITY: You're giving me polls and you're talking politics.

HANNITY: Hang on! Hang on!

WHITMAN:... your party because you don't -- people don't agree with you!

HANNITY: I'm a registered conservative, so you got the wrong...

HANNITY: You got the wrong party.

Lauren, let me go to you. Welcome to the show, by the way. Glad you're here.

LAUREN SIMONETTI, FOX BUSINESS: Thank you for having me.

HANNITY: All right, he didn't answer my question. Isn't it petulant of a president not to talk?

HANNITY: To just not discuss?

SIMONETTI: Do you remember Thursday, yesterday? I just want to talk about Wall Street for a quick second. We had the biggest point gain of the entire year. I know that's just Wall Street, but it affects Main Street because when people are making money, they feel better, right?

Just the fact that the politicians were talking actually did that. People want to just throw them in a room, close the doors and say, Just agree on something already.

UNIDENTIFIED FEMALE: He is talking.

JEHMU GREEN, FOX CONTRIBUTOR: The definition of leadership is not caving to people who -- the responsibility for why the World War II memorial was shut down is because the Republicans shut down the government.

GREEN: They are trying to...

GREEN: ... speaking out of both sides of their mouth because first the shutdown was going to be just a snow day, it wasn't going to have an impact. Now they're picking and choosing different programs...

HANNITY: Hang on a second!

GREEN: But by shutting down the government...

HANNITY: You don't answer my question, either!

HANNITY: Let me educate you! This is a partial...

GREEN: This is what has brought us here.

HANNITY: This is a partial shutdown. It's 83 percent. And there is discretion in terms of where the money is spent. Essential employees, essentially services and non. Pete is right. They did not have to -- they didn't have to take away those death benefits.

GREEN: When Republicans shut down the government, they knew those death benefits were going to be cut.

ERIN TOLBERT, ER NURSE PRACTITIONER: I think we're forgetting the basics of why health care reform exists. We're trying to improve health care. We've gotten too far away from that problem. As a health care provider, I think the only good thing that can come out of this at this point is that it spawns a free market system. ObamaCare is just a complete mess, and we've gotten away from the whole point of it.

HANNITY: Hang on! Hang on! I want to ask in the back. Sally Kohn, I know you're dying to get in. $634 million to a Canadian company is how much we paid for that system that they had three years to build that nobody could sign into.

SALLY KOHN, DEMOCRATIC STRATEGIST: I love this. You know, for years...

KOHN: For years, Democrats were saying, appropriate the money so that we can implement the law so that it can work. If you don't like the law, fine. Let it fail on its own...

HANNITY: We spent the money!

HANNITY: We spent it!

HANNITY: We spent the money!

KOHN: First of all, petulance is when Congress passes a law, the president signs it, the Supreme Court upholds it, and then the American people re-elect the guy...

HANNITY: ... of the Constitution?

KOHN: ... who doesn't agree with this? Republicans don't like the strategy.

DENEEN BORELLI, FOX CONTRIBUTOR: The bigger picture here is what we have to remember is that Obama wants to fundamentally transform America. And one way for him to do so, which are his words, thank you, is to control our health insurance system.

BORELLI: And when you're looking -- can I finish? I didn't interrupt you. And so for him to fundamentally transform our country, controlling individuals, controlling Americans -- this isn't about choice and individualism. It's about taking over, in my opinion, of what's going on in our country. And it's absolutely outrageous!

GUY BENSON, FOX CONTRIBUTOR: Could we just point out that at least 99 percent of the people who have tried to sign up for this thing have been unable to do so because of its own failure?

Going back to your point, $600 million and three-and-a-half years later, they can't get a functioning Web site up. And now they want to run our health care. I think that that raises some red flags. Regardless of what you think about the law itself, the incompetence in the rollout is astonishing!

HANNITY: You know why the Republicans ought to stand firm? Because the average cost for the average family -- and we're going to have examples for all of you at home tonight. You're going to hear real-life examples of people that are going to suffer under this law. Premiums are up, they're not down as promised. Companies are laying off. They're lowering the work hours so people get below the 30-hour threshold. A lot of impact to this law.