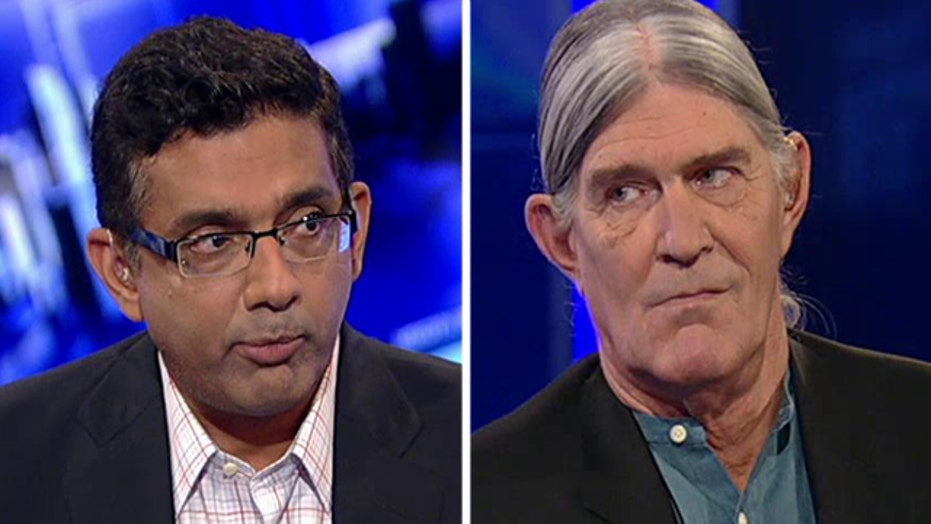 Debate about America's role in the world

MEGYN KELLY, HOST: Earlier this week we showed you some of our exclusive interview with Former University of Colorado Professor Ward Churchill, a man who spent decades lecturing young minds about what is wrong with America.

Churchill eventually lost his job after his essay comparing the 9/11 victims to an infamous Nazi finally hit the national media. He was unapologetic for his hurtful statements. And he still believes those victims arguably deserved it and that America is an evil empire. Tonight we bring you perhaps the best part of this entire interview when Dinesh D'Souza, the creator of the documentary film ‘America’ joined us onset, we discussed the professor's world view and how his opinions are shared at prestigious universities across this country. Watch.

KELLY: This is the world view, not just of Professor Churchill, that America's evil and needs to be stopped. But of many who are not on the left, Dinesh, necessarily but on the far left.

DINESH D'SOUZA, FILMMAKER: Yeah. You know, to me this is very fascinating. At one point when I saw Ward Churchill in his home in Atlanta he had said to me, Dinesh, you became a conservative because you came to America in the '80s in the Reagan era. And he described his involvement in the Vietnam War and how to some degree that had turned him against not just the military but against America. And it occurred to me, you know, we can think whatever we want about Vietnam, but I what think is remarkable is how a whole generation on the left went through that war. And it wasn't just that they turned against the war, but they made the war a metaphor for the country from the beginning. So, they went right back to Christopher Columbus and they re-wrote American history into becoming a series of Vietnams of war crimes one after the other. And they haven't stopped. So, if the country is bad, it deserves what it gets. And in a sense the whole thrust of his argument depends on are we in fact Nazi Germany, yes or no?

Now, when I see the World Trade Center, I see something totally different than he does. In fact, what I see is America representing a technological capitalism that is making the whole world better. I mean, if Nike or if Apple opens up a jobs wanted sign in Bombay, the lines will be around the block. Why? Because people are seeing hundreds of millions of people are coming out of poverty in Singapore, in Thailand, in China, in India, now, a lot of people still remain poor. I know that. But this technological capitalism here in America is not the problem. It's, in fact, the solution to the problem. So, to treat the World Trade Center as a symbol of evil, it's actually a symbol of good in the world.

WARD CHURCHILL, FORMER UNIVERSITY OF COLORADO PROFESSOR: My point, my major point was for all the buzz terms that sound nice when you put them on, I think you see a form of corporatism here. And corporatism is not necessarily capitalist. Corporatism could be fascist for example Mussolini was cooperative. OK. To be a state cooperative the mass and the Soviet Union, that's the...

CHURCHILL: ...of the ideology frame it in and certainly we don't have a free market.

KELLY: Is there anything good about America?

CHURCHILL: Is there anything good about America? Yeah, I love to drive back and forth across the place. And I love their people.

KELLY: Have we done anything good in our history?

CHURCHILL: Have we done anything good in your history? I don't know who is here. You're talking about the government?

KELLY: Yes, the United States of America. Have we done any good?
Because you have a long list of the terrible things we've done. Can you think of anything good we did?

CHURCHILL: Not off the top, but I'm sure you'll fill in the blanks.

KELLY: That's the problem with Professor Churchill, because people do not look at him as an honest broker. When you cannot -- you cannot offer one thing. Maybe liberating Europe, maybe...

CHURCHILL: That was the Soviet Union.

CHURCHILL: I think there were 27 million Soviets who died during that war that had a little more to liberating Europe if that's what you want to talk about.

KELLY: You're making my point, sir.

D'SOUZA: Right, but the Soviet Union was directly invaded. So, they were merely protecting themselves in fighting the Nazis. They were perfectly happy to be allied with the Nazis before that, do you remember?

And that`s what United States -- the Unites States not only liberated Europe but rebuilt Europe. And so former enemies, Germany and Japan, which were against us are now friends.

CHURCHILL: I'm familiar with the history.

D'SOUZA: Every year tens of millions of people try to come to the United States.

D'SOUZA: They try to come. And if we lifted the curtains more would come. Half the world would come here.

D'SOUZA: Now, they're coming here voting with their feet, leaving everything that matters to them behind. They're coming here because they think that this place provides them with a better life. Are they wrong? Are they coming to an evil empire? What do you know that they don't?

CHURCHILL: They're following their wealth to its destination.

D'SOUZA: An economic opportunity, but aren't they -- they have...

CHURCHILL: That's because the economic opportunity in no small part accrues from their own countries at the expropriation of their wealth which puts them into destitution there.

KELLY: Let me ask you this, why did you become a teacher?

CHURCHILL: To teach, to profess.

KELLY: To offer this world view?

KELLY: Were you doing that for years at the University of Colorado?

KELLY: When you wrote your essay on 9/11 which you then turned into a book a couple years later, 2003, did people read it?

CHURCHILL: Not only that, I got a runner-up for Best Writing Human Rights Award for it.

KELLY: So, was it known?

CHURCHILL: But fairly to stages in this fear.

KELLY: So, it was known that you have these views, that you had written this essay and followed it up with a book?

KELLY: And this wasn't a problem for your colleagues at the university or elsewhere as far as you know?

CHURCHILL: As far as I know I was probably in the top tenth percentile in terms of teaching effectiveness as rated by the students at the University of Colorado, at least the College of Arts and Sciences, which is the big one. I won a Thomas Jefferson Award. I won President's University Service Award...

KELLY: After this essay?

KELLY: I'm asking after the essay and once people had read it? Prior to it becoming a national story. Was it accepted, were people objecting -- was there anything within the academic community that suggested to you people have read it and did not have a problem with it?

KELLY: Now you have got to hear his answer to that question and the follow-up. It's unbelievable. It's next.