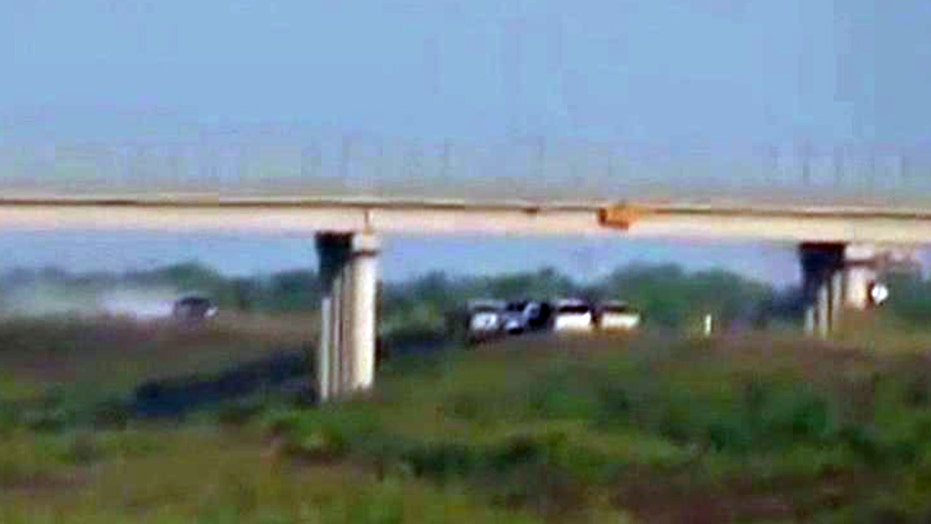 This is a rush transcript from "The Kelly File," June 13, 2014. This copy may not be in its final form and may be updated.

MEGYN KELLY, HOST: Breaking tonight, sources telling The Kelly File there is a new worry on the southern border tonight with border agents overwhelmed by this huge recent surge in illegal immigrants, the cartels are now taking advantage. Film Maker Dennis Michael Lynch traveled down there this week and found this.

DENNIS MICHAEL LYNCH, FILM MAKER DENNIS: Megyn, right now it's about 7:30 p.m. down here in South Texas. I'm gonna show you four things. Number one is the bridge, the international bridge from the U.S. going into Mexico. It's got to go through a preserve, a U.S. preserve. Right now there are Border Patrol, tons of them in the preserve trying to apprehend the families that are coming across. Move over to the right. You'll see this park. It's completely empty but today, before 5 o'clock it was filled with Border Patrol and constables. Where they've gone? I have no idea. It's completely empty. And this is what scares me to death. Over there, you have Mexico and that's the Rio and you can see the lights on the cars, those are all scouts. And there are little dings and they got little boats that coming across and wave runners and they keep on going back and forth and that wave runners bringing over drugs and it's bringing over people. So, while we're over here trying to get families, we've got everything dangerous coming through on the right.

KELLY: Dennis Michael Lynch joins me now live from Texas. Dennis, why? Why not? Why wouldn't they be there in the evening when everybody comes?

LYNCH: Megyn, let me just say this, what I watched over the last few days is so problematic and whatever I'm about to say on your show is the most important thing I've ever said on your show. We have so many problems facing this country, we know them all, especially the major ones, joblessness, welfare, national security, so on and so on. And as I stood on the border and I watched those cartels drag over all of the things they did, and I saw more scouts on the U.S. side watching than I did Border Patrol. And then I went over to the bus depots and watched thousands upon thousands of illegal aliens be bussed around almost as if they were at Disneyland. Being sent off to Somewhere USA, all I can think was that all those major problems just became a major epidemic. All of them collectively and individually. And I can tell you this, I feel that our country and the future of our children have officially fallen off the cliff based on what I have seen.

KELLY: You saw it with your own eyes at the bus stations?

LYNCH: I saw a pregnant women, one after the next with a pamphlet from Homeland Security walk in and get on buses and head off to America. They haven't been tested for any diseases. You know, we were talking about these children for quite some time. Let me tell you, the pictures depicted a worse story than it was. These children have witnessed an upgrade. They are psyched. They feel like they're on the line for space mountain, OK?

KELLY: But, Dennis, what we're learning from you and also the former, the vice president of the Border Patrol unit told us as well that the children may be a distraction. They may be a diversion.

LYNCH: They are. They are a total diversion. I'm telling you, Megyn, I'm not exaggerating. I mean, I'm telling you that this has been a life-changing event for me. I don't know whether or not I have to make more films or I have to start running for office. Something needs to be done because the people in D.C. from both sides of the isle I don't see anybody whose brave enough, willing enough or quite frankly, talented enough to stop this. This is the number one thing facing our nation across the board. I -- our Border Patrol, I met with the Border Patrol today. I met with them secretly. They told me the moral is down. The criminals are coming through the country is earth shattering, men are just hooking up with women and kids and pretending they're families and we're not checking them for anything if they've got criminal backgrounds, we don't know about it. If they have criminal backgrounds in the U.S., they're being sent to Mexico, they're coming back hours later.

KELLY: And the fact is, as these Border Patrol agents deal with the humanitarian crisis of these children, the bad guys are taking advantage of the void along the border with drugs and who knows what else. Dennis, I got to leave it that. We're short on time. We'll get back to you, of course, next week, thank you.