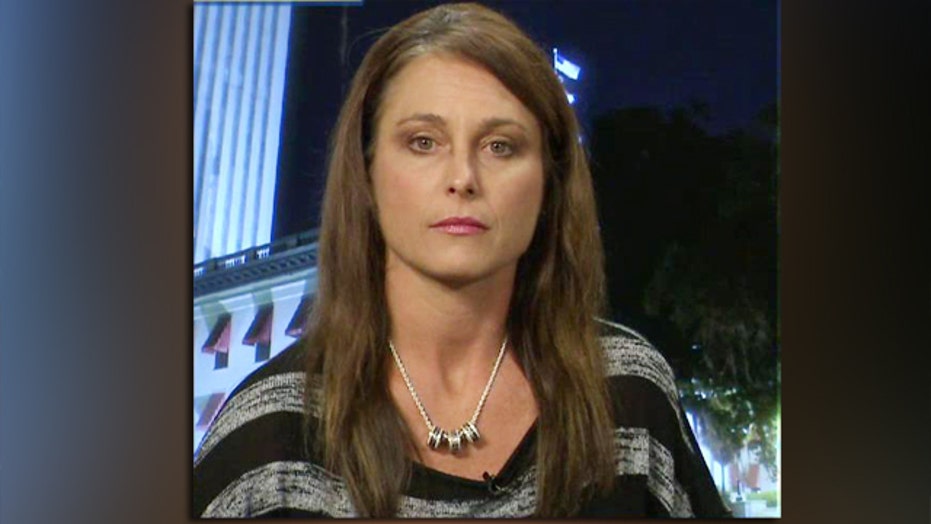 This is a rush transcript from "The Kelly File," April 20, 2015. This copy may not be in its final form and may be updated.

MEGYN KELLY, HOST: You may have seen the video today of an Air Force veteran arrested in a clash with campus protesters. She said she showed after a friend called and told her how the students were trampling all over the stars and stripes, and when she got her chance she grabbed that flag and refused to give it up. That's when campus police stepped in. Watch.

UNIDENTIFIED FEMALE: That's not here, it's been ripped?

MICHELLE MANHART, VET ARRESTED FIGHTING FOR FLAG: Actually it is. And he found it's been it's been torn or ripped it needs to be properly disposed of and we're going to take care of that. This belongs to actually the entire United States.

UNIDENTIFIED FEMALE: No, no. It's not yours.

UNIDENTIFIED FEMALE: It's not your flag.

UNIDENTIFIED FEMALE: She is resisting arrest.

UNIDENTIFIED MALE: Calm down. You got to calm down. Everybody back up! Back up!

UNIDENTIFIED MALE: Then give it back and we'll file a grievance.

KELLY: Joining me now in "The Kelly File" exclusive, Michelle Manhart. The veteran you just saw in that video. Michelle, thank you for being here. So, what was it about what they were doing to the flag that you found so objectionable that you had to go down there?

MANHART: They were walking on it, kicking it, throwing it on the ground, just disrespecting it in every manner possible.

KELLY: But why not say whatever. You know, I mean, this is what some folks do. This is their means of protest, you know, what effect has that had on my life?

MANHART: What effect it had in my life? It's my, it's your freedom. It's everybody in America's freedom and I don't think I could turn a blind eye but anywhere even if I saw it walking down the street just randomly, I wouldn't be able to turn my eyes to it.

KELLY: What is it about the flag in particular for you?

KELLY: What is it about the flag in particular for you?

MANHART: Well, you know, I come from a very long line of families so I'm raised, you know, with a lot of family values and a lot of respect for America as a whole. Being in the military we learned to respect the flag and defend the flag at all costs regardless. That flag is a symbol of our freedom. It stands for everybody in America. And you know, when there's several people that would love to serve their country and aren't able to and those who are there, they're given that opportunity to do so. We have to give that promise for freedom for all American people. And that flag stands for that. It's the freedom every day whether we're serving or we're no longer in. We still have to provide freedom at its fullest.

KELLY: You know, some who were watching this say, I'm, you know, I'm with her, I'm with her, and, you know, maybe she shouldn't have grabbed the flag as it's technically their property and so on and the incident with the cops you admit you were resisting arrest. You ultimately just got a warning.

But, but, some believe you see that the moral high ground back in 2007 when you did this with the flag in a shoot that you did for Playboy magazine and they were wondering how you can reconcile the indignation on the one hand and the revelation on the other?

MANHART: Well, I can't can see the photo that you're speaking of but I assume that it's the one with the flag right in front of me --

MANHART: -- and it actually wasn't done with Playboy. That was done after the fact and it was a special photo shoot that was done and it was actually done to show, you know, that the regular person on a daily basis. We have a lot of materialistic items. We have clothes, we have jewelry, we have cell phones. We're very materialistic people. And we -- there was a thought that came about what happens when you take all of the materialistic items away from a person. What are they left with. Well, you're left very vulnerable, you're left in the nude you have nothing and you feel maybe at your lowest. And we want to represent that when you were at your lowest no matter what that is in your life, when you just think that...

MANHART: ... everything has been taken from you, you will always have your freedom if you stand behind that flag.

KELLY: Let me ask you this because this is somebody who just wants attention. She wants publicity. She didn't need to go down there. You know, she was generating a controversy. And you brought your daughter to film it on her cell phone which, you know, jumps out of the, you know, casual observer as interesting and why did you do that and was this a publicity stunt.

MANHART: Definitely 100 percent you have my honor and word that it was not a publicity stunt. My daughter did accompany me not for any other reason than just to be by my side. I didn't know, I even spoke to her on the way there and said, you know, what we're going to get there and that university will have dissipated this and it won't be around. The fact that she turned on her personal cell phone camera, you know, I commend her for that. I think, you know, nowadays a lot of our youth are starting to record things so it's not a "he said, she said" game like we've been growing up with. S

KELLY: Well, that's it. So, you were demoted from the military after the nude photo shoot. But then your husband is serving now, is that correct?

MANHART: That's correct. I was not demoted. There's been a lot of controversy over, I mean, over eight years we've been actually to trying to get that fixed. I wasn't demoted. I wasn't dishonorably discharged. I was honorably discharged with a positive reenlistment code. Meaning, if I wanted to go back in the service that I could apply to go back in.

KELLY: Wow. Thank you coming on and telling your story. We appreciate you being here tonight.

MANHART: Thanks for having me.