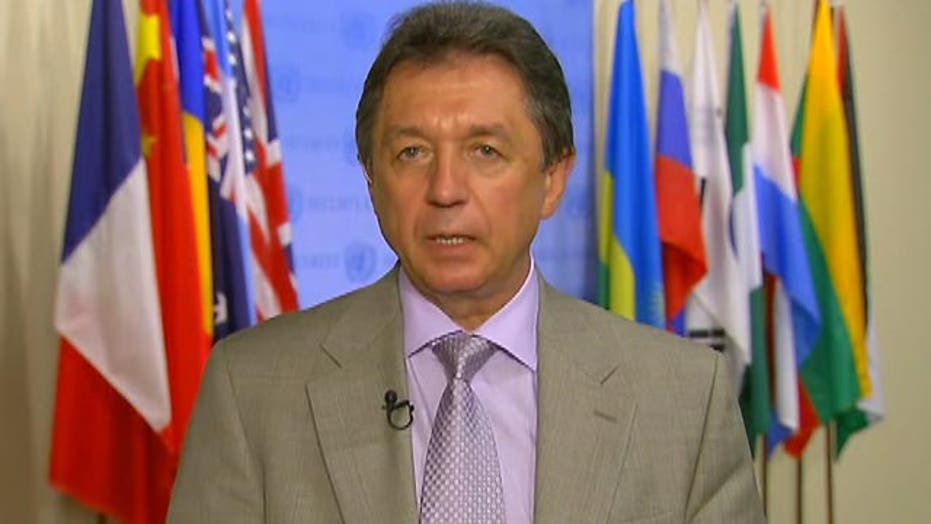 This is a rush transcript from "Hannity," July 21, 2014. This copy may not be in its final form and may be updated.

SEAN HANNITY, HOST: Here with exclusive reaction to the downed Malaysian passenger jet is the Ukrainian Ambassador to the U.N. Yuriy Sergeyev is with us. Yuriy, thank you for being with us.

What about the issue of the Buk missiles?  Specifically, do you believe that, in fact, with the Russians taking control of the crash site, that a lot of the evidence has been taken away?

YURIY SERGEYEV, UKRAINIAN AMBASSADOR TO THE U.N.: Yes. We had evidences that these Buks they brought from Russia to Ukrainian territory, and now to the -- they use it for this terrible crime, so they moved them out. It was filmed by amateurs, the locals people, and they provided these evidence to the initial (ph) security service. It should be the materials presented to the investigation -- international investigation team.

HANNITY: From my understanding of the Buk missile system, there's a certain degree of knowledge, expertise, that is necessary to fire those missiles.

SERGEYEV: For sure. So and detained -- detained people, detained Russians, they confirmed that the special experts they were sent, including those two of them who were arrested in the region, and they right (ph) as experts (ph) fire (ph) adjustment. It means that professionals worked with Buks there.

HANNITY: I was surprised to learn that all of these Ukrainian military jets and helicopters have been fired out of the sky in the days leading up to this. How many in total were taken out of the sky?

SERGEYEV: For them, it was much easier to targeted them because the low-flying objects and they used the transferable (ph) weaponry. And so in total, we lost two jets, on transport (INAUDIBLE) and three helicopters.

HANNITY: All right, let me ask you bluntly. In your opinion, do you have any doubt in your mind that Vladimir Putin is responsible for taking down the planes and the helicopters you just mentioned and this commercial airliner?

SERGEYEV: The terrorists on the ground, they claim that they are responsible.

HANNITY: Is there any...

HANNITY: Yes, but are they tied to Putin? Does he have culpability here, providing -- providing them the weaponry, instigating what they were doing?

SERGEYEV: First of all, they confirmed all previous attacks on other helicopters and airplanes. They did that. And they explain even the means they targeted them. As for as this recent attack concerns, also, they confirmed what they used. They started to change by social nets (ph) their victory. That's why a lot of the evidences, coinciding evidences and datas which confirm that Russia stands behind that with their weaponry, including sophisticated Buks.

HANNITY: All right, Ambassador, thank you for being with us. We appreciate it.