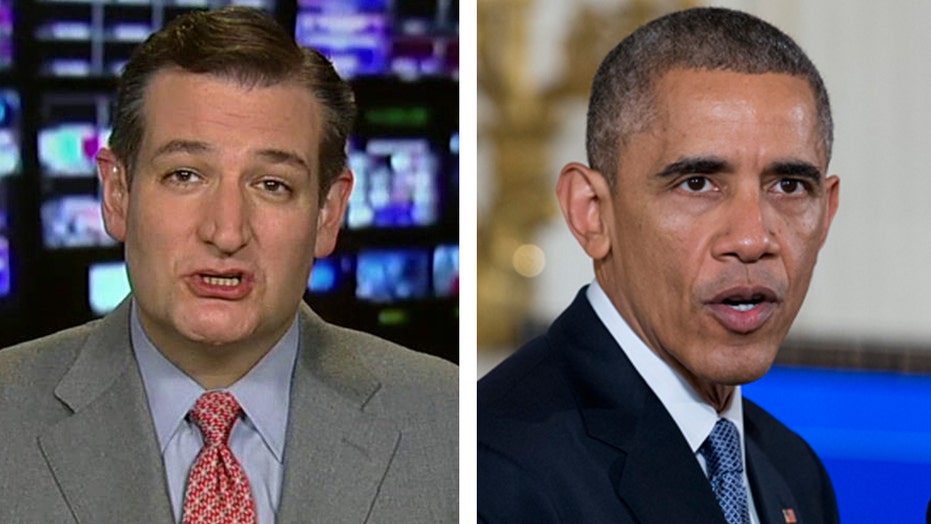 This is a rush transcript from "The Kelly File," November 19, 2014. This copy may not be in its final form and may be updated.

MEGYN KELLY, HOST:  Back to our breaking news.  Less than 24 hours from right now, President Obama is due to announce his plans to go around Congress and with the stroke of a pen tell up to five million illegal immigrants not to worry, you can stay.  My next guest says, he has a plan to act as a check on the President's power.

Texas Senator Ted Cruz is a Republican and member of the Senate Judiciary Committee.  He previously served as solicitor general in the border state of Texas, and has authored more than 80 U.S. Supreme Court briefs and argued 43 oral arguments including nine before the U.S. Supreme Court.  I spoke to the senator just before we came on air.

Good to see you tonight, Senator.  And so your plan to combat what we expect will be the President's plan tomorrow night.

SEN. TED CRUZ, R-TEXAS, SENATE JUDICIARY COMMITTEE:  Megyn, it's good to be with you.  We are unfortunately witnessing a constitutional crisis. What President Obama's doing is he is defying the law, he's defying the constitution.  You know, the President quite rightly said just a few weeks ago his policies were on the ballot all over the country. This last election was a referendum on amnesty. And the American people overwhelmingly rose up and said, no, we don't want lawless amnesty. And I'm sorry to say President Obama's reaction is defiant.  And it is angry with the American people.  And if the President goes forward with this, if he goes forward unilaterally defying the Congress elected by the people, defying the American voters, then it's incumbent on Republicans in Congress to use every single constitutional tool we have to defend the rule of law to reign in a president so the president does not become an unaccountable monarch imposing his own policies in defiance of the American people.  This is a moment of testing.  And I am hopeful we will see Republicans in Congress stand up and side with the people against the lawless president.

KELLY:  I know you believe that if Congress does not act you say it will lose its authority.  It's a bigger issue than whether you agree with the end result of what the President's about to do.  It's the matter of separation of powers, how strong the executive is going to be and whether Congress is still relevant.

And we fought a revolution to be free from King George, to have the rights of the people protected by Constitution, protected by a Congress.  And if you read the Federalist Papers they talk about the dangers of a despotic executive that rules by fiat.

KELLY:  They weren't the only ones. President Obama talked about that repeatedly over the past six years, only he sees it differently now apparently.

CRUZ:  You are exactly right.  nd it's a very strange thing. You know, in elections that he liked, the President was fond of saying elections have consequences.  Well, this last election there was no ambiguity.  There were two issues that dominated this last election.

Number one, ObamaCare.  And number two, amnesty.  This was a referendum on amnesty.  And the American people overwhelmingly said we don't want ObamaCare.  It's a disaster.  It's hurting the American people.  And we don't want amnesty.  And I'm sorry to say the President is behaving in an unprecedented way.  There is not in recent times any parallel for a president repudiated by the voters standing up and essentially telling the voters go jump in a lake, he's going to force his powers.

KELLY:  Uh-mm.  You know, the White House came out today through Josh Earnest and said what they think the message was.  This was a message directly to you by the way.  The President has drawn a message from the midterms that the American people want progress.  And they point to the fact the Senate passed a bipartisan bill, the House's side on that for over500 days.  The American people they believe want progress even though polls suggest they don't want the president to do it this way.

CRUZ:  Well, look, many of the senators that voted for the bill he's talking about were voted out of office.  You know, if they're spinning the message of this last election is that Congress should suddenly agree with President Obama's policies and roll over, then they have traveled to some of these states that have legalized marijuana and they've been smoking something.  Because that ain't what this election was.  This election said, the American people said the path we're on isn't working.  And I got to tell you, Republicans all over this country, we campaigned and said if you elect us, if you give us a Republican Senate, we will stop ObamaCare and we will stop amnesty.

KELLY:  Let's get specific because the political risks as advised by members of your own party, you know, I mean, conservatives like Krauthammer and others and Brit Hume, you know, speaking about, if you shut the government down, there's going to blowback, and no matter what happened, you're going to blame it on the Republicans, if you try to impeach the President, the American public won't support you, that's a bridge too far.  So, what specifically do you plan to do?

CRUZ:  Yes.  Step number one.  The new Senate Majority Leader Mitch McConnell, should stand up and say if you disregard the Constitution, if you disregard the law, if you issue this executive amnesty, the new Congress for the next two years will not confirm a single nomination, judicial or executive, other than vital national security positions until you end this illegal amnesty.  Now, that is a big and it's a dramatic step.

It's never been done before in Congress.  But the framers put in place checks and balances.  And the confirmation power is a tremendously potent authority given to the Senate.  The Senate Majority Leader has the unilateral ability to stand up and say, if you defy Congress, if you defy the Constitution, if you defy the American people, none of your nominees will be confirmed.

KELLY:  So he'll never sign those and he'll say that the funding -- the reason the V.A. aren't getting -- the patients at the V.A. don't get their medical care is because of Senator Ted Cruz and these Republicans who keep sending me these appropriations bills that have this unnecessary writer on the back that I won't sign.

Don't mention amnesty.  Don't mention ObamaCare.  Don't mention anything. Just say we should fund our soldiers, sailors, airmen and marines.  We should fulfill that function.  Now, if we fund a straight up appropriations bill, look, the democrats could filibuster it, the president could veto it.

But if they're doing that, they're saying we don't want to fund the Department of Defense.  We should do that one at a time so that we take off the plate the major priorities.  And then we get down say to the Department of Homeland Security, which is in charge of implementing this lawless and illegal amnesty, that is the instance in which that appropriation should have the writer.

If the President wants to veto it, he can shut down DHS.  That would be a wrong and irresponsible response.  But listen, a presidential temper tantrum is not a rational response.  What the constitution requires, if you want to change immigration law, and I think we need common sense immigration reform, the way to do it is the president has to work with Congress.  You have to compromise.  You have to reach a middle ground. This president doesn't want to do that.

KELLY:  He has said that repeatedly, at least 25 times according to our count.  He has been on record as to that.  But boy has he done a 180.  Senator Ted Cruz, thanks for being here tonight, sir.