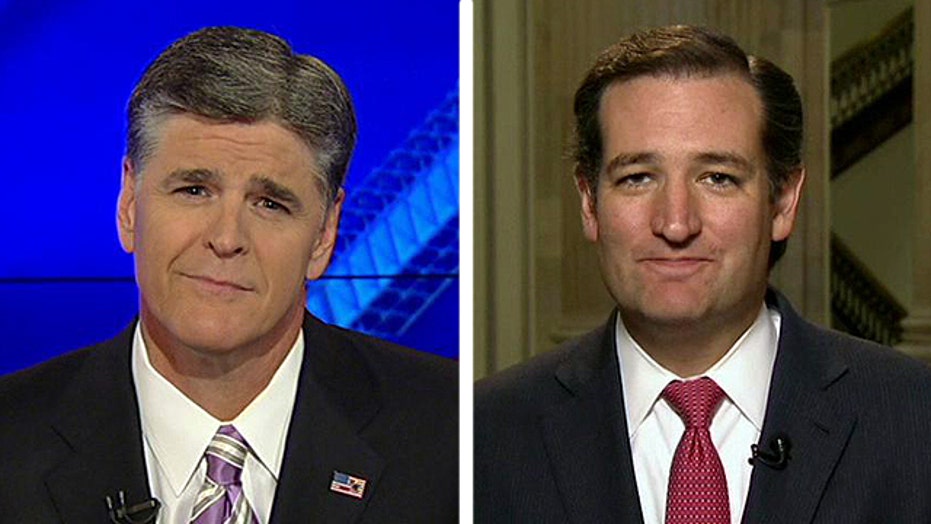 First interview with the congressman since his historic effort

This is a rush transcript from "Hannity," September 26, 2013. This copy may not be in its final form and may be updated.

SEAN HANNITY, HOST: Joining me now from Washington for his first TV interview since his historic speech on Tuesday night, Senator Ted Cruz. How are you, Senator? How you holding up?

HANNITY: Did you get some sleep?

CRUZ: I did. In fact, you will like this. I went home and took a nap yesterday about 4:00 p.m., got up about 8:45. Went and made myself a sandwich, sat down, and the first thing I did was watch "Hannity" and then watch Greta.

HANNITY: You know, what? That's a good schedule. Then I hope you went back to bed.

CRUZ: I did go back to bed after that.

HANNITY: You know, one side note question before we get into the specifics, because this is really an important issue. So, you stood for 21 hours, 19 minutes. You have to stand the whole time, you're not allowed to eat on the Senate floor. You're not allowed to go to the bathroom either. Did you go and take a steam bath or something before and dehydrate yourself?

CRUZ: Well, you know, the advice Rand gave me beforehand, he gave me a couple of things. He said, one, wear comfortable shoes. And so, I didn't wear the boots I usually wear. I went and bought some black tennis shoes, which helped. And two, he said do not drink much water. And so, the whole time, I just took tiny sips. I think I probably drank less than a glass of water all 21 hours. And that's about the only way you can make it without going to the bathroom.

HANNITY: I watched it throughout most of the night, I lost a lot of sleep myself this week, but for a good cause. And I was amazed at your ability, how lucid, and fluid and articulate you were.

HANNITY: And you didn't seem to miss a beat.

Let's talk about the substance of where we are. First, let's start with the president's comments and your reaction to that.

CRUZ: Well, you know, I'm glad to see that the American people speaking up as they have in overwhelming numbers of getting the president's attention. And I think those comments suggest that he's worried, you know, when he's throwing around insults like irrational, like blackmail. You know, the first thing I thought listening to that is I wonder if he thinks James Hoffa, the president the teamsters was irrational. Because James Hoffa wrote a letter to Harry Reid and Nancy Pelosi that said he was opposing ObamaCare because he was speaking on behalf -- and these are Hoffa's words -- of millions of Americans, working Americans, and the families that depend on them because ObamaCare was destroying their health care, and destroying is the word James Hoffa used.

So, I guess, I would ask the president if he's saying everyone criticizing ObamaCare is irrational, if he means to be saying it about the president of the teamsters.

HANNITY: Well, it's an interesting question. You know, there are so many aspects of all of this. I think the most surprising thing to me as a conservative -- and I'm a registered in New York is the way you've been treated by some of your colleagues. At the end of this 21-hour, 19-minute marathon, you had a little back and forth with the Majority Lead Harry Reid. And he was offering you another hour seemingly, but you had to offer 15 minutes of that to John McCain. And as soon as you got off the floor John McCain attacked you. Let me play it for you. I want your reaction to this.

SEN. JOHN MCCAIN, R-ARIZ.: I resoundingly reject that allegation. That allegation, in my view, does a great disservice, a great disservice for those brave Americans and those who stood up and said what's happening in Europe cannot stand. When the ship was turned back and the passengers on that ship were sent directly to the gas chambers, when Czechoslovakia fell and the slaughter continued, there were many who raised their voices.

HANNITY: Now, you were talking about appeasement. I mean, and I know exactly what he was referring to. What's your reaction to that?

CRUZ: Well, look. I respect and admire John McCain. He is a war hero. He's someone who served his country and he suffered in a Vietnamese prison. And so, you know, I will have nothing for praise for John McCain. I disagree with him on this issue. But I respect the man and I respect his service.

HANNITY: What bothered me more is he seemed to have collaborated with Harry Reid on this because Harry Reid was going to give him that 15 minutes.

All right. You had a back and forth. I will ask one more and then we'll talk more about the specifics. But Bob Corker today, there seems to be anger at you. As far as I know, correct me if I'm wrong, did every senator and every congressman that's a Republican, did they all run on the platform they would re-peal and replace ObamaCare? Is there anyone who didn't run on that?

CRUZ: As far as I know, everybody did. And we twice had votes this year where 45, all 45 Republicans at the time voted against ObamaCare either to repeal or defund it.

HANNITY: All right. So there were a lot of symbolic votes to do that.

HANNITY: But this is the one that would actually do it.

HANNITY: So, I keep hearing that there are tactical differences. And I asked your fellow Texas Senator on my radio show yesterday, John Cornyn. And he says, no, if we get elected in 2014 and get control of the Senate then in January 2015. Is that what their goal is -- those that disagree with you here?

CRUZ: Look, the tactical difference, you put your finger on it. There's a difference between wanting to take a symbolic show vote that's not going to happen versus actually standing up on the continuing resolution. This is a vote that matters because it's got to pass. And if we stand together, if tomorrow at 12:30, 41 Republicans stand together, we can stop Harry Reid from funding ObamaCare. And right now there are a lot of Republicans who are publicly saying they intend to vote with Harry Reid and the Democrats tomorrow to give Harry Reid the power to fund ObamaCare.

And look, I have to say I disagree with that. And what is been happening that encourages me, Sean, is we have over 1.8 million people who signed the national petition on dontfundit.com, who are lighting up the phones, the phones are melting down in the U.S. Senate, or getting on Facebook, getting on Twitter and asking senators vote no on cloture. Don't stand with Harry Reid. Don't give Harry Reid the power to fund ObamaCare. And that's making a real difference.

HANNITY: And the reason you want to vote no on cloture is because as soon as vote no on cloture, then Harry Reid would just need a simple majority to strip out the defunding provision of the house CR. Is that it?

HANNITY: I want to ask you about that. Let's first go to this exchange with Bob Corker of Tennessee. And then I will follow up on what you just said. Let's play that.

SEN. BOB CORKER, R-TENN.: Is it more important to the senator from Texas and the senator from Utah that the people around the country watch this vote or is it more important to us that we have a good policy outcome from our standpoint and actually have a body that has the majority of Republicans to be able to react and send back something of good policy. This is confusing to me.

HANNITY: All right. You went back and forth. We didn't air your part. I want to get to the heart of this. What is Bob Corker's plan to repeal ObamaCare then? Because they keep saying this is a tactical difference. When is ObamaCare repealed under his plan? Do you know?

HANNITY: Well, I mean, it seems to me, is it that they are angry you're a freshman senator and how dare you fulfill your campaign promise to your constituents? Because I don't see you're doing anything other than that. Why is there such a resentment here? Because this was getting downright hostile.

CRUZ: Well, Sean, I don't want to speculate about Bob Corker's motivations in coming to the floor, and supporting Harry Reid and attacking Mike Lee, which is what he did this afternoon. But let me say this generally. A lot of Republicans, they have been here a long time. And they are beaten down. And they're scared that if we stand together on this and if a government shutdown results, that Republicans will be blamed and it is too the politically risky.

And, you know, I just think we need to stand for principle and actually stand together. And you know, some of those Republicans are telling their constituents they are going to vote for cloture. They are going to vote for giving Harry Reid the power to fund ObamaCare, but they are trying to convince constituents that that's a vote against ObamaCare. And it just isn't. And if were Harry Reid and every democrat in the Senate wouldn't be voting the exact same way.

HANNITY: So, this is important I think for the American people to hear. So, basically, this is about fear of being blamed for a government shutdown. That's it. Is it any more -- and fear of the political consequences that they may get blamed. Is that what it is?

It's not the way you win elections. You win elections by fighting for the American people, fighting for principle. And I hope tomorrow all 46 Republicans come together, even those that have said they're going to vote with Harry Reid. I hope they have second thoughts, I hope they listen to their constituents and stand they together to vote against giving Harry Reid the power to fund ObamaCare.