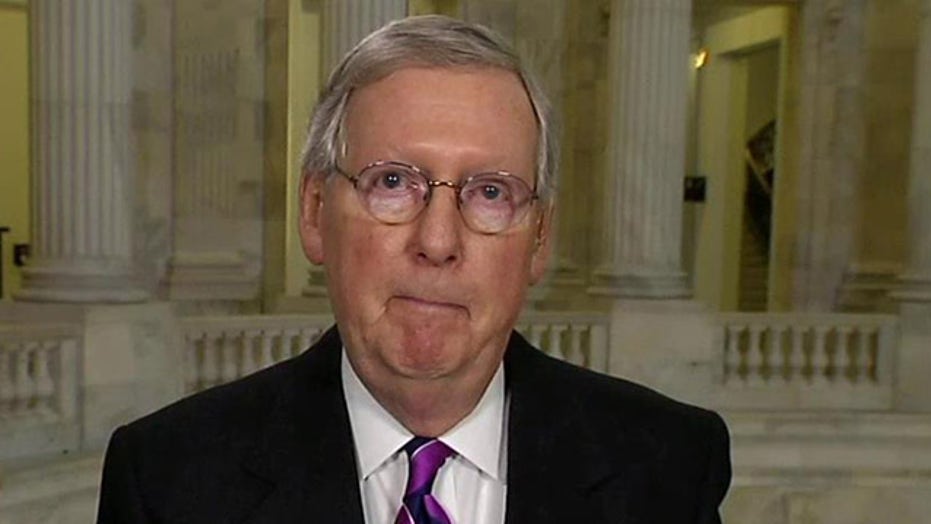 Senate majority leader on how lawmakers will work with Obama

This is a rush transcript from "The Kelly File," January 8, 2015. This copy may not be in its final form and may be updated.

MEGYN KELLY: Does Mitch McConnell trust the president? I asked him that and more in our exclusive interview with the new Senate majority leader.  Watch.

KELLY: So, the question I have for you is, what's going to change?  Because I know you came out and said, "Look, you know, Mr. President, big things can be accomplished if we work together." But what exactly do you think could be accomplished?

SEN. MITCH MCCONNELL, R-KY., MAJORITY LEADER: Well, we'll see. I mean, I'm certain, I've been discouraged of what the president has done since the election. He seems to be on a crusade to continue doing things with executive orders. What the majority leader has the opportunity to do is to set the agenda, and what I've said is we're going to turn first to the Keystone XL pipeline, a decision he's been sitting on for five years that would put literally thousands of people to work very quickly.

KELLY: It's supported by 70 percent of the American people.

MCCONNELL: And help us embark (ph) -- supported by 70 percent of the American people and, you know, help us embrace this remarkable energy revolution that's going on in our country. Everybody sees that at the moment with low gas prices. And yet the president says he will veto it.

Look, my attitude is, if we can find some things that we can agree on, that's great. But the president does not set the agenda in the Senate. If he chooses to sign the things that we can put on his desk, great. If he doesn't, at least the American people will know who the obstructionist is.

KELLY: Do you think that was a thumb in the eye of the new GOP-controlled Senate for him to come out? He didn't say that back when Mary Landrieu was still fighting for office.

KELLY: -- and they were voting on Keystone but he waited until you got in and then made very clear, "Oh, I'm going to veto that."

MCCONNELL: Oh, that's a good point. We had this vote back in December, between -- when Mary Landrieu was in her final runoff election, the president didn't utter a word about vetoing it, and your point is well made. And now that the very same bill is being called up by a Republican majority leader, he threatens to veto it.

But -- look, I think we get the message. He is controlled by the far left environmental extremists in this country.

KELLY: What do you need to do? What will forge a different 2015 versus, you know, what we've seen in the past few years?

MCCONNELL: The issue is -- the issue is the president is very left wing.  He does not want to do most of the things the American people think make good sense. That's why we had the election we had last November.

MCCONNELL: I'm reminded of what President Reagan said about the Russians back there in the Cold War, trust but verify. There are a few things that I think we could probably make some progress on, trade, international trade which is a real job creator for us. We haven't seen that pivot to the middle, which is where you can potentially find areas of agreement out of this president. But this is just the first day of this Congress. We'll see.

If you're asking me whether I'm optimistic or not, frankly, I'm not very optimistic based on what's happened so far.

KELLY: Now, Harry Reid ruled that Senate with an iron fist. I mean, he -- he had a tight grip on that body. And if he didn't like a certain bill, it did not make it to the president's desk, from repealing they medical device tax that's part of ObamaCare to the sanctions that we're going to be put in place on Iran, even though these things had bipartisan support, he did not let them get to the president's desk.

MCCONNELL: Oh, you just said it. We're going to be voting on things. I'm not going to try to prevent votes on things that Barack Obama doesn't like.  I mean, that was part of Reid's motivation. We're going to open up the Senate and respect the work of both Republicans and Democrats.

Now, obviously there's some advantages to being in the majority. We're more likely to get our way at the end. But I think there's a pool of Democrats that have had it with the president, had it with the way the Senate used to be run and would like to be a part of accomplishing things.  Whether the president will sign these bills or not remains to be seen.

KELLY: Up next, Senator McConnell's top goal for this Senate. Here's a hint, it has nothing to do with passing laws, and it's already raising some eyebrows at the White House. Next.

KELLY: And now to the rest of our exclusive interview with the new Senate Majority leader, Mitch McConnell.

KELLY: Now, you told to Washington Post that quote, "The single best thing Republicans can do in the new Senate is to quote "not mess up the playing field for the GOP presidential nominee."  Really? Is that the top goal?

MCCONNELL: Yeah. Unless this president is willing to sign our legislation, then that's probably the best we can hope for. To -- to have the American people feel very confident that if they had a Republican president to this Congress they're finally going to be able to turn the country in another direction.

He may stymie us in achieving what we'd like to achieve. The presidency under our system is one important job.

MCCONNELL: He can veto a bill or he can sign a bill. So, if he won't agree to change the country, then we're going to at least make it clear where he stands and where we stand in the hopes that the American people will give us a president in 2016 who wants to go in the same direction we want to go.

KELLY: Would you describe the group that's now governing on Capitol Hill as conservative?

MCCONNELL: Yeah, I would. I mean, certainly we are, and I think the question is, you know, what can we actually pass? We're going to have to have some Democrats in the Senate to pass anything out of the Senate. If we had 60 votes, it'd be different. So. we're going to be certainly right of center. We'd probably be further right of center if we had more votes, but 54 is what we have right now.

KELLY: How are you going to reach out to the Tea Party?

MCCONNELL: I think the differences have largely been on a matter of tactics. On the philosophy and the direction we'd like to go in, I don't find any real difference between people who are described as sort of Tea Party members of Congress and those who aren't.

We would be a lot more conservative Senate Republican conference if we had more members and maybe the American people in the next election will give us more members.

KELLY: What's the -- what's the biggest difference so far? You've been the majority leader for two days. How is it going? What -- do you feel different? Do you feel more powerful?

MCCONNELL: Well, I think setting the agenda is important and the majority leader does get the chance to set the agenda, determine what we're going to talk about. I mean, the Keystone Pipeline was never scheduled by the Democratic Majority until right after the election.

KELLY: I know all that. I'm talking logistics.

KELLY: Come on, walk us through it. Do people -- do they salute now.

KELLY: -- when you walk by? Do the guards stand up a little taller?

MCCONNELL: No. No. No. Every senator is pretty much equal. Every senator has one vote. But there is one senator who gets to set the agenda and that does determine what we debate, which is no small matter.

I mean, Megyn, for four long years we almost never were discussing anything that Republicans thought was important for the country.

MCCONNELL: That's different and that's a step in another direction, and I think there are at least 10 or 15 Democrats who may wanna help us move the country in a different direction.

KELLY: Well, I'm going to get one -- one of the other Republican senators on and I'm going to ask him whether there's a special swagger in Mitch McConnell's step these days because you're too polite a man to -- to say it yourself. But congratulations on your win.

MCCONNELL: Thanks a lot.

KELLY: And thank you for being here, sir.

MCCONNELL: You bet, thanks.