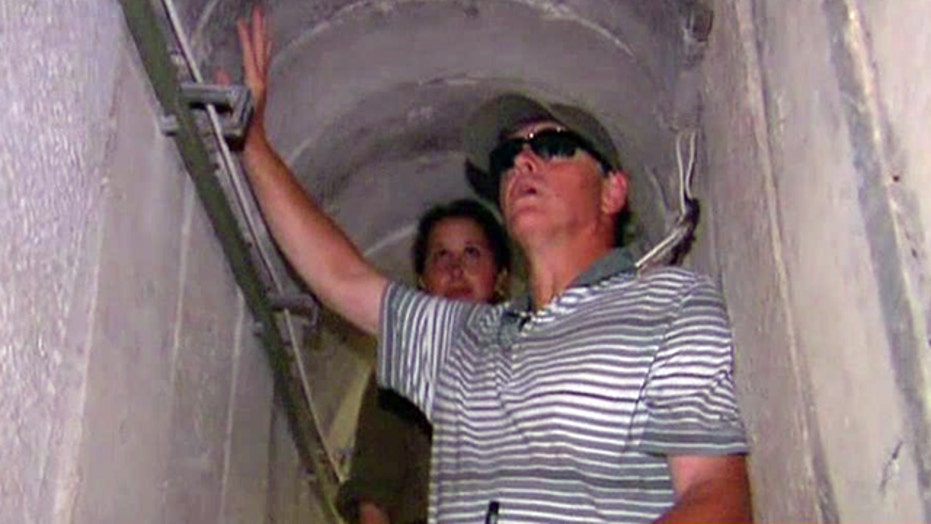 This is a rush transcript from "Hannity," August 4, 2014. This copy may not be in its final form and may be updated.

SEAN HANNITY, HOST: And welcome back to "Hannity." We are on the ground in Israel tonight. Israeli Prime Minister Benjamin Netanyahu has made it very clear that there could be no real end to this conflict in Gaza until the entire Hamas tunnel network is destroyed.

Now, earlier today, IDF spokesperson Libby Weiss gave me an exclusive look inside one of those very tunnels, and I saw with my own eyes just how extensive and sophisticated they really are. Take a look.

HANNITY: You, meaning the Israelis, actually dug down. You knew that this tunnel right down where we're going to go now -- how -- how many -- how -- that's deep.

LIBBY WEISS, IDF SPOKESPERSON: This is very deep. So we know that this access of the tunnel that's right in front of us is about 14 meters deep.

WEISS: So in order to allow us access to it and really operational flexibility to deal with the tunnel, we had to dig and to get down there.

HANNITY: Right. So look how far down we're coming. I mean, it's a pretty steep hill.

HANNITY: And you guys actually excavated this. Watch this -- over there because it's a little less steep -- so that you can have access.  This is actually a midpoint in the tunnel, though.

WEISS: Exactly. This is an access point right here, and we know that the projected exit point was actually about 300 meters from the nearest community, residential community right here.

WEISS: So it's clear to us and it's obvious from really what we see on the ground that the goal was to have--

HANNITY: To get into the community where we were back about a quarter of a mile.

WEISS: To have 10, 15 Hamas terrorists in the middle of the night--

WEISS: -- surprise that entire community and just pop up from a tunnel.

HANNITY: This may surprise you -- as we get down there -- we'll go down -- that a lot of the cement that we're talking about here was actually provided to the Palestinians by Israel.

WEISS: Yes. So we know that the tunnel here has been built with cement that has come in as aid--

WEISS: So rather -- than that build schools--

HANNITY: Rather than being used for the people and hospitals and--

WEISS: -- we see that tunnels are being built.

HANNITY: This is really sophisticated, engineered tunnel network. And this is one of how many, do we know now?

WEISS: Tens. We know that there are tens of--

WEISS: Yes. It wouldn't be a crazy estimate.

WEISS: And we know when you look inside, you can really see the engineering and the architecture.

WEISS: This was not kind of dug haphazardly in someone's back yard. I mean, this was a project--

HANNITY: And again, look, you can see with the cement here -- I mean, this is reinforced. This is a real tunnel network with wiring?

WEISS: With wiring. It's important to note that when we found this tunnel, there were tracks along the ground to allow for the exit of the material that was being dug.

WEISS: There was electricity. I mean, this is a huge investment.

HANNITY: By the way, Israeli electricity.

WEISS: And cement. Exactly. That comes in--

HANNITY: That would have otherwise have been used for schools and hospitals and infrastructure and building people's homes.

HANNITY: OK. So this is one of maybe 50, 60. All right. You found a number of them, and Israel is in the process of breaking up this infrastructure.

HANNITY: Because if you leave it in place and that means then they have the infrastructure to come in, maybe kidnap three more Israelis and kill them like they did the three students?

WEISS: Exactly. I mean, without destroying these tunnels, there are clear tunnels and passageways from a Hamas lair in the Gaza strip to a community here right along the border.

HANNITY: If you can look at the excavation here -- and this is really important. If we can pan out and look straight up here, you know, I can't estimate the feet. But what are we, 40 feet, 50 feet?

HANNITY: -- it makes the state of Israel vulnerable.

WEISS: Very much so. And the fact that we have these tunnels possibly under our feet, under--

WEISS: -- the communities that are littered all around this area. I mean, this is no greater definition of a threat.

WEISS: However you want. Either way is OK.

Seems small in the beginning, but it's really not. The level -- first of all, this is really important -- Libby, are you coming in?

HANNITY: You need help? You all right?

HANNITY: All right. Now, the way you found this tunnel -- this is important because how -- it's -- you literally made the excavation. This is all here.

HANNITY: This is all wiring.

WEISS: Yes. All the wiring. We found tracks along the floor.

HANNITY: What are these--

WEISS: So this is where -- also for reinforcement, also for electrical wires to able to really wire the place with electricity.

HANNITY: And how far back will this tunnel take us?

WEISS: Well, we know that it started in Han Younis, within the strip--

WEISS: I would say probably about half a mile, a mile.

HANNITY: About a half a mile, a mile. Now, look at the -- I used to be a contractor. Look at the level of sophistication here. You've got these cement walls and blocks.

HANNITY: All the same size, all built out, all pieced together. By the way, the construction overall, very solid.

HANNITY: This isn't going anywhere. So they worked their way all the way through.

WEISS: And it takes years. I mean, we estimate that the progress--

HANNITY: And you have to have a lot of people working.

WEISS: And a lot of money.

HANNITY: And a lot of digging to get this, yes.

WEISS: This is cement that's incredibly valuable pricewise in the strip. It's going towards terror tunnels, rather than anything else.

All right, so we're going to move back and move a little further because, literally we could walk this for an entire mile and still -- I'm 6 foot tall, and you can stand, I can't.

WEISS: I can stand.

HANNITY: So I would say it's about 5-9 up in the air. Now, what's this thing here, this canister?

WEISS: So these are canisters from our troops, when they were in here--

WEISS: -- in here understanding what was going on. Again, keep in mind that destroying these kinds of tunnels requires troops to go inside, possibly face Hamas terrorists that are in the tunnel, booby traps.

HANNITY: Now, these tracks, I assume, are used as they bring the reinforcements as they get further and further along. This helps in the -- to expedite the building of the tunnel.

WEISS: Exactly. It helps shovel out the sand and the dirt that you're seeing in here.

HANNITY: Right. So we got -- if we look down, if we can pan down here, I'm actually standing on what seems like tracks. Obviously, they would use something to go along the tracks to move there. That's pretty unbelievable.

All right. And again, this infrastructure is here. This wiring, sophisticated behind the cement blocks -- unbelievable.

WEISS: Now, this is -- again, we project this is millions of dollars--

HANNITY: Well, what happened to feeding the people, the Palestinian people?

WEISS: Right. I mean, rather than take the cement and build schools, build homes, build businesses, instead, we have--

WEISS: -- a terror tunnel. We have tunnels that literally bring Hamas terrorists to the homes of Israelis.

HANNITY: Unbelievable. And this is what the prime minister of Israel has been talking about when he talks about the tunnels and the infrastructure.  This is the very thing that he's trying to break up here. Now, by the way, this is one that you found pretty early on, right?

HANNITY: And looking for many, many more.

HANNITY: OK, now, I'm going to -- if you can, turn your camera around and let's see how far -- because there are steps back there, what looks like steps, or is that part of the tracking? It seems to be--

HANNITY: -- seems to go into a curve. Right. Let's just walk down and through that and go back a little further and see what things look like back there. The cement stops here, and I want to look at what that is.  That seems to be the natural -- so if that is the natural rock that is broken up, obviously, there's a lot of jackhammering going on and some serious--

WEISS: Exactly. To any kind of civilian location.