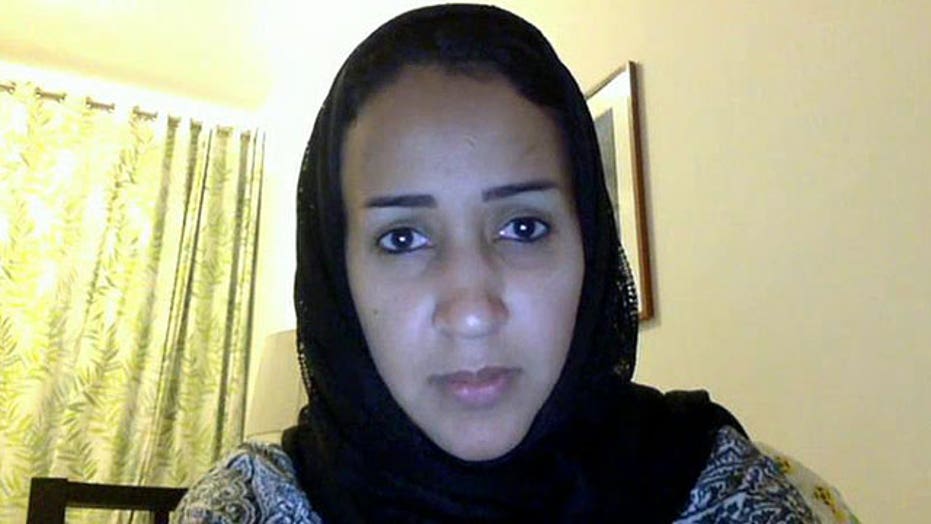 Exclusive: Saudi Arabian activist on the real war on women

Activist arrested after filming herself driving on 'Hannity'

This is a rush transcript from "Hannity," April 22, 2015. This copy may not be in its final form and may be updated.

SEAN HANNITY, HOST : Now, for years, Democrats all across the country have accused conservatives of waging a war on women.  Tonight, we have news for these liberals. There is a real war being waged against women, but it's not in America and it's not by conservatives.

Now, in this war, women are tortured. They're treated as second class citizens, unjustly imprisoned and they are even killed. Now, of course, I'm talking about the deplorable treatment of women in Islamic theocracies.

Now, my next guest is an activist from Saudi Arabia and has been on the front lines of this war for many, many years, even starting a right to drive campaign for Saudi women, where she films herself driving a car within Saudi Arabia. And that move, of course, that got her arrested and thrown in jail.

Joining us now via Skype is the brave woman behind that video, women's rights activist Manal al Sharif is with us. Manal, thank you for being with us.

HANNITY: Mrs. Clinton -- we have a presidential campaign going on, and from the kingdom of Saudi Arabia, she took anywhere between $10 million and $25 million. She says she's a champion of women's rights. She's never spoken out about the treatment of women in this country that her foundation has taken tens of millions of dollars from.

I want you to explain to our audience why you went about this effort and what happened when you were caught driving.

HANNITY: Yes. Now, I understand women also -- you don't have the right to wear any clothes that you want as a woman in Saudi Arabia. Is that true?

AL SHARIF: Yes, we have to wear abaya, the black cover, in public.

HANNITY: Yes. So in other words, you must cover in public.

AL SHARIF: No, not anymore. It used to be like that. But now more and more (INAUDIBLE) not covering their face, and they're OK.

HANNITY: What about the morality police? Can you explain that women in Saudi Arabia, as I understand it, are not allowed to leave their home if they're not accompanied by a male relative? Is that true?

AL SHARIF: No, not true.

AL SHARIF: This is a typical stereotype, I would say, about Saudi Arabia. Women can leave the house without a man. (INAUDIBLE) in the court (ph). The problem is the (ph) work (ph) that she needs a man permission or the legal guardian permission do these things.

HANNITY: All right, so you need man's permission to do it. But you also have the morality police. There's a group of police officers -- for example, if you wanted to meet a young man in a park and have ice cream together, that can't happen, can it.

AL SHARIF: No. No. So these things are -- it's (INAUDIBLE) a very conservative society. Even the (INAUDIBLE) wouldn't allow it. The morality police is there to set the rules to make sure that everyone is following the Islamic teaching in public.

HANNITY: ... that American women have and the choices -- you can't even drive a car. That's the point! You can't drive a car!

HANNITY: That is absurd to me!

This is a really, I would say, wrong comparison. And if the American woman would look at people, Oh, she's wearing abaya or she's not driving a car, and look at that like, Oh, I'm more privileged, I'm lucky. I'm sorry, I disagree with that.

HANNITY: I don't think it's lucky. I think it's called freedom.  America is free. You do not have the freedom that American women have!

AL SHARIF: If freedom is wearing a bikini, I don't want that...

AL SHARIF: Yes, and that thing is changing. I'm not saying that women in Saudi Arabia are not trying to change their...

HANNITY: So you're not free. That's the point! It's oppressive! It is oppressive for women. And I'm not trying argue. I know that you grew up in a different culture than what we have here.

But if you have the freedom -- the fundamental core value of America is freedom of expression, freedom of speech, freedom of religion. There are no Christian churches that are allowed to be built in Saudi Arabia.  There are no Jewish synagogues. Gays and lesbians, as you said, must do it but in a closet somewhere. They can't come out publicly. Women can't drive.

And I think, in many ways, in my opinion -- and I say this respectfully...

HANNITY: ... you don't have the freedom that women in America have, and I feel bad for you.

AL SHARIF: No. I didn't find it offensive that you say these things because if you talk about gay marriage, until the '70s, it was thrown (ph) out in the U.S. society. And U.S. society is very conservative. You still have the racism. You still have all these -- the native Americans, they don't have their rights until today. Women still don't have equal...

HANNITY: But listen, I understand what you've grown up with. I have to run, Manal, but I did enjoy our conversation.

HANNITY: And I wish you best. God bless. Thank you very much.  Appreciate it.