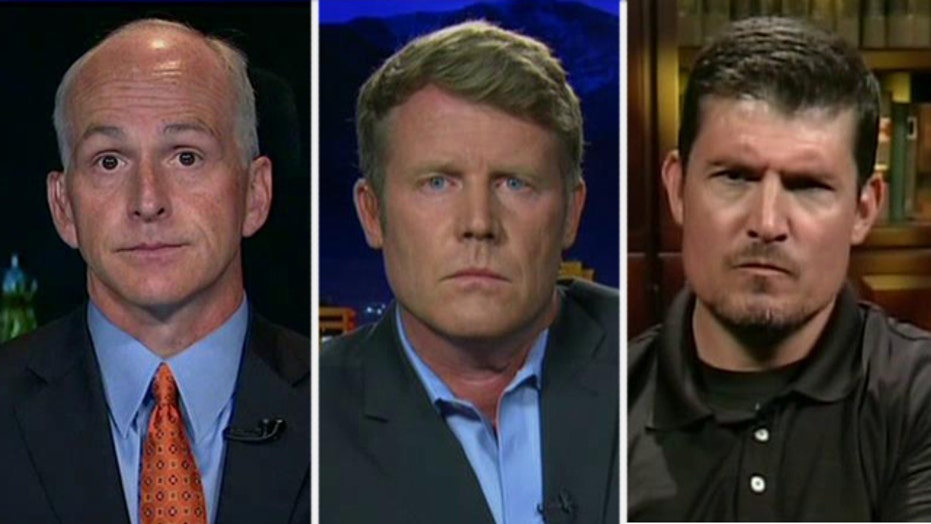 This is a rush transcript from "Hannity," September 25, 2014. This copy may not be in its final form and may be updated.

SEAN HANNITY, HOST: And welcome back to "Hannity." Now, last week at a House Democratic press conference, two lawmakers had this to say about members of the Benghazi Annex Security team who defied stand down orders and rushed to the aid of those Americans under attack at the U.S. consulate in Benghazi on 9/11/2012. Watch this.

UNIDENTIFIED MALE: Myths continue to be brought up. And you know, one of the big ones is the whole issue of a stand down order, which was never given.

UNIDENTIFIED MALE: Some of these questions that have been repeatedly asked and answered were asked again in the wake of a campaign to promote a new book. Both the House and Senate Intelligence Committees interviewed these three contractors, their supervisor and others on the ground, and concluded that there was no improper stand down order. To second guess these decisions made in the fog of battle is both unfair to the brave personnel involved and highly irresponsible.

HANNITY: Now, those comments made by two liberal House members, Congressman Adam Smith and Congressman Adam Schiff, sparked outrage from members of the Benghazi security team, who challenged the congressmen to a debate. Let's take a look.

UNIDENTIFIED MALE: We can talk about it.

UNIDENTIFIED MALE: We can discuss it.

UNIDENTIFIED MALE: He wants to see and say that to my face, we can talk about it and talk about everything.

UNIDENTIFIED MALE: It's difficult for me because you're calling a Ranger, a SEAL and three Marines liars!

HANNITY: Now, earlier, I sat down with two members of the Benghazi annex security team, Mark Geist and Kris Paranto. They're the co-authors of the new book "13 Hours: The Inside Account of What Really Happened in Benghazi," as well as the only lawmaker man enough to accept their invitation, and that's Washington congressman Adam Smith. Take a look.

KRIS "TANTO" PARONTO, BENGHAZI ANNEX SECURITY TEAM MEMBER: A stand down order was given to John Teagan (ph). I was told to wait twice. The semantics and the words that we're playing with here are ridiculous. The order was given. It cost lives.

PARONTO: That's enough said. I don't know how else to explain it. I

want to say to Mr. Smith, was he there that night with us? Where was he?

HANNITY: Congressman, Adam Schiff, you know, said it was unfair and irresponsible of these men -- now, I've interviewed them a number of times, and they tell a story where they got dressed, they heard the communications going on at the consulate. They were told to stand down. Those words were actually used. And then after 25 minutes, they really risked their career and they disobeyed an order and they went, and they ended up saving 25 lives.

You were part of that press conference. What do you say to them?

REP. ADAM SMITH, D.C.: Well, first of all, the reference that I made to was to the folks in Tripoli. I was making no reference whatsoever to the annex in Benghazi.

There's two stand down orders that are out there. One was for the Special Operations team that was in Tripoli. One planeload of people did go from Tripoli to Benghazi. A second was considering going. Some of the Special Ops guys wanted to go, and they were told not to. They were told not to because they felt that they needed to secure the situation in Tripoli. That is what I was referring to. Those people were not told to stand down. The second...

HANNITY: Who was the person -- in that -- in that press conference...

HANNITY: I want to clarify one thing. In that press conference,

though, I don't know if it was you or the other congressman mentioned, Oh,

they're only doing it to sell a book. Was that you?

HANNITY: That was not you.

SMITH: I wouldn't say -- I wouldn't say that at all. Second, as I understand what happened in the annex is unquestionably that the guy who was in charge, who I believe you referred to in your book as Bob, the Deputy Chief of Mission, said -- you wanted to go. He was in charge of the compound. He said, No, don't go.

Now, the why of that decision -- it seems to me, and maybe you gentlemen can correct me, it seems to me that when Bob was deciding that situation, it wasn't no, under no circumstances do we not want to help these people. He was making a command judgment call as to what was the highest risk. Now, he may well have been wrong. You gentlemen make I think a very good argument for that. But the argument he was said no, we're just not helping them -- he was making a judgment call about what was

the best thing to do was there.

HANNITY: All right, let me get a response.

SMITH: The second thing, congressman -- one other thing I got to bring up, and that is the implication that the stand-down order came from D.C. That was investigated and clearly proven not to be the case. The gentleman in question, Bob, the Deputy Chief of Mission, was the one who told these gentlemen not to go. That's not disputed.

SMITH: I'm not saying they did say -- I'm talking about things that others have said.

SMITH: Not by me.

HANNITY: I didn't say by you.

SMITH: Not by me.

HANNITY: But you were there. In that press conference --

HANNITY: When they were called irresponsible and unfair, and that it was suggested they only did this for the book. But I'll give these guys a chance to respond. Chris?

MARK "OZ" GEIST, BENGHAZI ANNEX SECURITY TEAM: This is Mark. You know, the thing that upset us, and if you're guilty by association by standing next to Congressman Schiff, then I apologize for that for you. But he attacked us. We're not the enemy. We're the ones that saved five American lives at the consulate because we left when we did. We didn't -- we saved another 25 lives at the annex. We can debate all day long whether or not the order, why it was given or why it wasn't, why he held it back, we can debate that. But the facts are the facts. We were there. No other congressman was there that I saw of. And we --

GEIST: But people are out there saying that we are lying. On national television they're accusing us of lying.

HANNITY: Chris, I want to give you, go ahead, Chris.

PARONTO: It doesn't matter if it's by you. Then the congressman should have stood up and said, you know what, that was incorrect, that shouldn't have been said. And it didn't happen. Here we are on TV talking to you, saying this is wrong, it's wrong. You shouldn't have said it. All right, the book is correct. Everything in the book is right. There's nothing wrong with it. And also move forward, hey, don't call us liars anymore. If you're going to, come into the studio with us --

SMITH: I never, I never called you liars. Now, I'm not willing to say that everything in your book is the absolute truth. I mean, you are definitely heroes. There's no question. But there's a whole lot of people who had a whole bunch of different opinions about what happened there. And what our job is, because the committee has been --

PARONTO: They were hiding in the building.

SMITH: All we're trying to do is investigate and get the best information possible as to what happened. And one of the allegations, not made by you, but one of the allegations that we've looked into was that somehow somebody in D.C. had both in Tripoli and at the annex given a stand-down order.

HANNITY: Let me hold the ball a little bit here. Congressman, let me ask you this question. I have asked these guys extensively about the narrative that the president and Susan Rice and Hillary Clinton, that they all went out there and said this was related to a YouTube video. They all said it was a spontaneous demonstration. These guys were there. And they say from day one that they knew that story was a lie and false. What does that mean to you when the president, the secretary of state --

HANNITY: I'm asking. What does it mean to you when they are telling a story that the guys on the ground are saying is absolutely, positively false? What is your reaction to that as a congressman?

SMITH: Let me ask the guys on the ground. What do you think did motivate these people? How far in advance do you think they planned this attack?

GEIST: Congressman Smith, I was on the receiving end of a mortar attack where four mortars landed within probably 10, 15 meters. That's not done by somebody who is untrained, doesn't plan --

GEIST: How long does that take? Right.

GEIST: They don't do that haphazardly.

GEIST: That's something that takes time and training.

PARONTO: And you do not bring RPGs to a protest as well.

HANNITY: All right, guys, thank you. Congressman, appreciate it. I hope Adam Schiff will take these guys up and come on and explain his comments, because he called them unfair, said they're lying and said they have some financial motive, and I think he needs to do what you did, congressman. Thank you all for being with us.