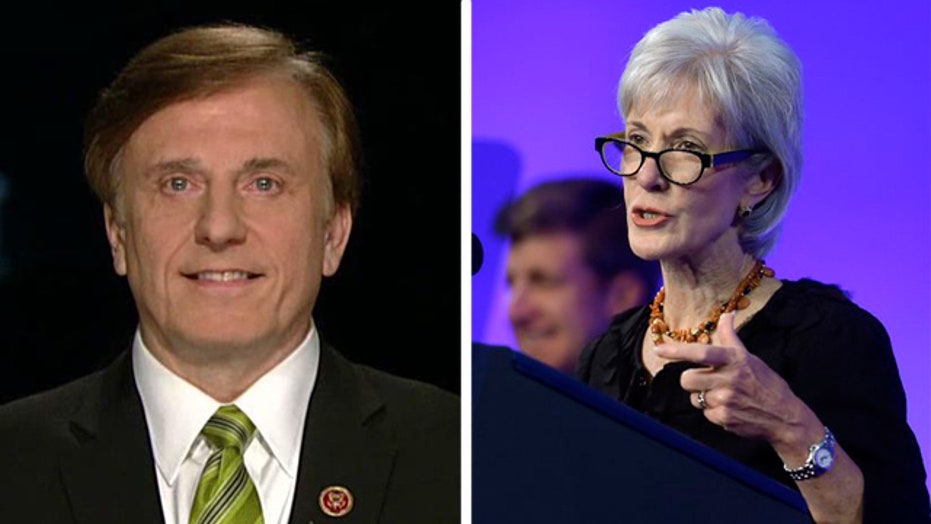 Exclusive: Rep. Fleming on why Sebelius should resign

This is a rush transcript from "The Kelly File," October 23, 2013. This copy may not be in its final form and may be updated.

Louisiana Congressman John Fleming is a Republican and vice chair of the GOP doctors caucus. He just sent a letter to the White House a couple of hours ago with the signatures of almost three dozen other lawmakers.

Sir, it's good to see you here tonight. And you believe Secretary Sebelius needs to resign. Why?

REP. JOHN FLEMING, R-LA.: Absolutely, Megyn. Look, Secretary Sebelius was one of the biggest cheerleaders for this law going forward. And all along, she was reassuring us how, what a great experience this is going to be for customers. How easy it was going to be when, in fact, we find out that it's been an absolute disaster. And then, a couple of days ago, we learned, heck, she never even informed the president that this thing was about to collapse.

KELLY: Well, I want to ask you about it. Because the White House is today maintaining the story that the president didn't know, that he found out as we all found out as the roll out began October 1st, he started to learn that. And my question for you is that we have seen a pattern of President Obama finding out from news reports about major stories from his administration. So, do we hold those underneath him accountable or does the buck stop with him? Here is just a sampling for our viewers of the president on some major stories.

PRESIDENT BARACK OBAMA, MARCH 2011: There have been problems. I heard on the news about this story that Fast and Furious where allegedly guns were being run into Mexico and ATF knew about it.

UNIDENTIFIED REPORTER, MAY 14: When did the president find out about the Department of Justice subpoenas for the Associated Press?

CARNEY: Let me just be clear. We don't have any independent knowledge of that. He found out about the news reports yesterday on the road.

KELLY: And same story now. Your thoughts on it.

FLEMING: Well, I would say Megyn that we know this is not at all a transparent administration. We know that the president demands unbelievable loyalty and he surrounds himself with yes people. So, he should be accountable for this. He should have been asking those questions.

But on the other hand, when it comes to Secretary Sebelius, she's the CEO. She's the one who is heading HHS which now controls one- sixth of the largest economy in the entire world. And this problem with the Internet portal is really just a shiny object. You will find a lot more problems as you go layer by layer underneath into this big giant terrible onion called ObamaCare.

KELLY: Representative Fleming, we will see what the response is. So far, the White House is standing by Secretary Sebelius. Thank you for the being here, sir.