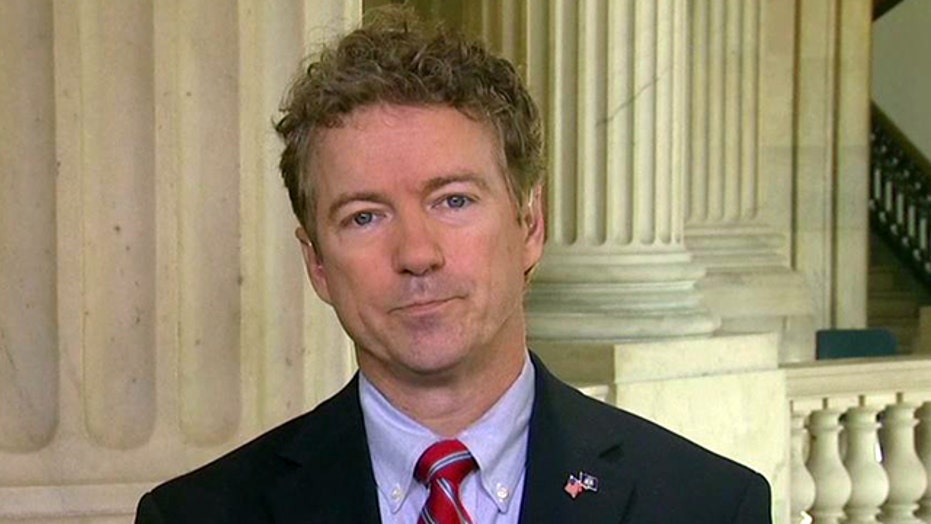 This is a rush transcript from "Hannity" March 10, 2014. This copy may not be in its final form and may be updated.

SEAN HANNITY, HOST: Welcome back to "Hannity." Now, in a moment, I'll be joined by Kentucky senator Rand Paul. He was the big winner of the CPAC straw poll this weekend.

But we bring him in, is there a rift developing between Senator Paul and his Texas colleague, Ted Cruz? Let's take a look.

JONATHAN KARL, ABC NEWS: Rand Paul said "some on our side are so stuck in the Cold War era, they want to tweak Russia all the time, I don't think that's a good idea." What's your reaction to that?

SEN. TED CRUZ, R-TEXAS: I'm a big fan of Rand Paul. He and I are good friends. I don't agree with him on foreign policy. I think U.S. leadership is critical in the world. And I agree with him that we should be very reluctant to deploy military force abroad, but I think there is a vital role, just as Ronald Reagan did. When Ronald Reagan called the Soviet Union an evil empire, when he stood in front of the Brandenburg Gate and said, "Mr. Gorbachev, tear down this wall" -- those words changed the course of history. The United States has a responsibility to defend our values.

HANNITY: All right, here to respond to this and much more is Kentucky Senator Rand Paul.

First of all, Senator, congratulations. Your reaction -- big, dramatic straw poll victory two years in a row by a very significant margin. What's your reaction to that?

SEN. RAND PAUL, R-KY: Well, you know, I'd always rather get first than second.

PAUL: Somebody asked me over the weekend, they said, Do you think these straw polls are important? And I said, Well, only if you get first. If you get second, no not so important.

But no, we were excited by it. You know, you've been there. There are thousands of young kids there, and it is really exciting. And you do feel that energy of all these college kids and some a little older than college.

So there's a lot of communication through their cell phone, and I think they don't understand why the government would be able to collect their records or look at their phone records without a warrant or without a suspicion. So they're very attuned to the NSA scandal.

PAUL: We always have been good friends. I'm not real excited about him mischaracterizing my views, and you know, I won't let that pass. I think that, you know, sometimes, people want to stand up and say, Hey, look at me, I'm the next Ronald Reagan. Well, almost all of us in the party are big fans of Ronald Reagan. I was a 13-year-old kid when my dad was a delegate for Reagan and I was there in Kansas City.

I've always been a big fan of peace through strength. I think America should and has a responsibility around the world. And really, virtually all of the opinions that have been coming from Republicans are somewhat the same on this: That Putin should be condemned. He should be isolated. I favor sanctions against Putin.

So for people to characterize that as somehow not being the Reagan position -- I think they need to have a rereading of Reagan, frankly.

HANNITY: Yes. Do you -- do you think that your positions are the same, then, or basically the same?

PAUL: I think on a lot of these issues, yes, that I'm well within the Republican tradition, well within those who are here. I think that we do need to have a stronger presence and project stronger ideas of cultivating freedom around the world.

And I also agree, though, with Ronald Reagan, who often said, or in one of his inaugural speeches said to potential adversaries, don't mistake our reluctance for war for a lack of resolve. Reagan was strong. He built up the military. He had a military that was second to none. I still believe all of that.

So what's inappropriate is for people, particularly other Republicans, to mischaracterize or attempt to characterize my foreign policy as something it isn't.

PAUL: They are more than welcome to have their own, but they -- they need to be a little wary of trying to mischaracterize mine.

HANNITY: Would you -- do you want him to apologize?

PAUL: No, I'll settle for maybe he just needs to work on presenting his own ideas. I think that one of the things Reagan was big on was the "11th Commandment." Our party gets bigger if we try to include more people in it and not be so divisive.

HANNITY: Yes. All right. Moving on, do you agree with me, for example -- Crimea, which is a big issue in my mind. I think it's a geopolitical bit of an earthquake. And I think it's only the beginning. I would deploy those -- the missile defense system in the Czech Republic and Poland, something this president pulled back on. The second thing I would do is -- I think this points more than anything else again towards the need for energy independence. You agree with both those things?

PAUL: Absolutely. I think we should deploy the missile defense system, but I think Europe should pay for it. I also think that energy independence and export of energy is important. I think the president could immediately do things to free up. The Keystone pipeline ought to be approved two years ago. We should be exporting liquid natural gas as well as oil exports. We need to open up and have more trade with Europe.

Russia has a difficult time making a profit if oil goes below $90 a barrel. So yes, part of our energy policy ought to be producing enough that Russia can't dictate to Europe and that Europe is not beholden to Russia.

HANNITY: All right, Rand Paul, thanks for being with us, appreciate it.