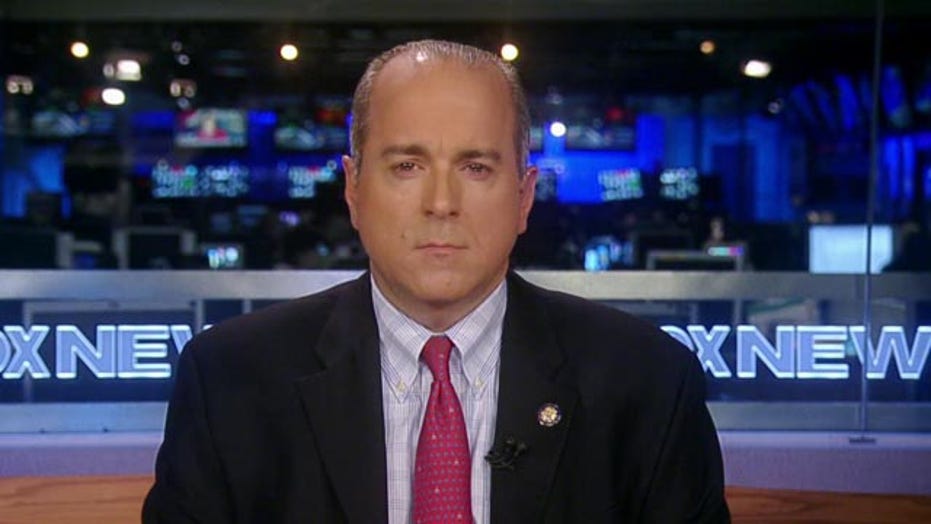 Exclusive: NYPD staffer who turned back on mayor speaks out

This is a rush transcript from "The Kelly File," December 26, 2014. This copy may not be in its final form and may be updated.

SHANNON BREAM, GUEST HOST: But first, a Fox News exclusive with NYPD Sergeant Ed Mullins who is not only the president of the Sergeants Benevolent Associations but he was one of the NYPD's staffers who turned their backs on New York's Mayor de Blasio.

Sergeant Mullins joins us now. Sergeant, first of all, I want to thank you for your service out there in the line of duty, sir.

ED MULLINS, SERGEANTS BENEVOLENT ASSOCIATIONS: Thank you. Thank you for having me.

BREAM: All right. I want to ask you, after you've had a little time, some of the tensions maybe have simmered down a bit. Do you regret your decision to turn your back on the mayor or to say that he has blood on his hands or do you standby those actions and statements?

MULLINS: I stand by those actions and statements. The mayor has gained public office by turning his back on the NYPD. His whole campaign was based on issues confronting the NYPD. If you look at the mayor's track record, nowhere along the line did he ever have any kind of a background that was on the side of law enforcement. He's always been divisive when it came to law enforcement and the community. And it's only as a result of these two officers being killed is the mayor now making statements that we need to comply with lawful orders and respect our police. It hasn't been the case in the past. And as far as turning my back on the mayor along with other cops, I standby that. I think that the mayor needs to lead and he's not doing that right now.

BREAM: Well, and there's been a banner that flew over the Hudson River there in New York that addressed Mayor de Blasio specifically. A blogger says, alleges that it was a group of anonymous police officers, retired and current officers. It says "De Blasio, our backs have turned to you." Do you think it's helpful in this situation, do you think it gets us any progress towards maybe some conciliation? Or do you think there is reconciliation possible between the mayor and the NYPD?

MULLINS: There's always reconciliation possibilities. We've seen countries that have been at war for years and years where, you know, they do get to point of reconciliation.

What's interesting is that the question of reconciliation consistently comes up. And we're now a week later. Here it is Friday, and a week ago today the mayor sat down and met with the protesters. It will be a week tomorrow that these two officers were executed in their patrol car. And the mayor is yet to reach out to any of the police unions to discuss moving the ball forward and having a less divisive city or plans for dialogue or any kind of communications to build bridges going forward. He's made public statements. He's been really hiding under the popularity of the police commissioner. And ultimately it still comes down to the rank and file. His argument has been we don't represent the rank and file. I think you're going to see in the weeks that come he's completely wrong on that.

BREAM: He has made statements outright condemning these killings saying there is no possible justification. He has asked for protesters and demonstrators to stop at least until these two men, these heroes, can be laid to rest. And the conversation can restart after that. Are those actions not enough for you? He visited the families as well. If you were the mayor of New York, what would you do?

MULLINS: Well, if I was the mayor in New York, I would approach the subject with a lot more humility and start to re-evaluate how I came into office and maybe realize that some of my actions were not the right actions that I need to be reflective of all people. And what the mayor came in with was a tale of two cities, to which today we now have two cities. We didn't have two cities when he ran for office. He needs to become humbled.  And he needs to start backing up his words with actions because he has no track record of having actions in the past.

I personally would further it with meetings -- and I'm opening myself to meetings with Dr. Alveda King, Dr. Ben Carson, the Reverend Floyd Flake, the Reverend Calvin Butts, George Martin, a former NFL player for the New York Giants. Him and I have been working together trying to build bridges. And we are reaching out to these particular individuals of credibility, along with Eleanor Tatum who runs the Amsterdam paper. I would like to meet with each of them and I like to start to work towards some ideas that I have that I think would be helpful to build bridges going forward with the community and to get them to understand exactly what the police do.

BREAM: Sergeant, let me ask you, what does it do to the officers on the front lines to their job, their ability to do their job, when there are these threats, credible threats that are coming in? And yet they get in their cars, they leave their families every day and they go out there and work their beats.

MULLINS: The stress levels are monumental right now. Officers are very vigilant as to what takes place. The simplest act of walking into a store or going out on a particular aided case, you don't know if you're really going to an aided case or you're going to ambush. So the awareness levels are very high, the stress levels are very high. And in the long run this is something we'd all like to see be lowered and create an atmosphere of safety for the police officers. But we're doubling up in patrols and watching each other's backs and the cops are arming themselves, inside stationhouses now. So, we've now become a very defense-oriented police department.

BREAM: All right. Sergeant Ed Mullins, we thank you and your fellow men and women were out there doing their jobs risking their lives and choosing this career. Sir, thank you very much for your time.

MULLINS: Thank you. Have a great night.