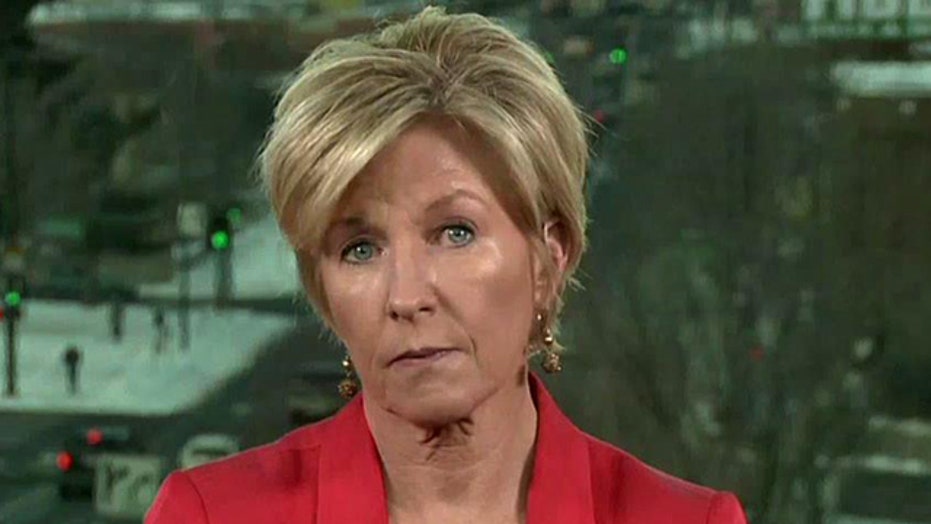 Exclusive: Julie Hayden on her phone call with hostage-taker

This is a rush transcript from "Hannity," February 5, 2014. This copy may not be in its final form and may be updated.

SEAN HANNITY, HOST: The standoff lasted 18 hours, but tonight a 13-year-old Colorado boy who was taken hostage is in fact free, his captor is dead. It all started Monday evening with a domestic dispute -- 34-year-old Don Pooley, a convicted criminal, got into an argument with his girlfriend and he fled to the boy's nearby home. The victim's mother, older brother escaped, but Pooley held the boy captive while police were negotiating for his life. At one point during the night Pooley actually called a local reporter. Now, listen to a bit of this chilling conversation with that reporter.

JULIE HAYDEN, FOX 31 NEWS REPORTER: Is there any way you could just let him go?

POOLEY: Absolutely not. He's the only avenue that I have for them to even consider or entertain the idea of backing away. I want to run away. I don't want to be here. I feel horrible for this little boy right now. He hasn't stopped shaking. He's whimpering. He won't answer me verbatim. I don't know what else to say.

HAYDEN: What about the little boy, though?

POOLEY: He goes, too, if they come to the door. I'm sorry to the community. I'm sorry to anyone who has a heart string attached to this situation or scenario. I know it sucks. I know it's a drag.

HANNITY: Here to talk for the first time on national TV about what happened next and how the tragic situation in fact came to an end is that reporter herself, FOX 31's Julie Hayden. Julie, thanks for being with us. Walk us through this.

HAYDEN: Sure, thank you.

HANNITY: Tell us what happened.

HAYDEN: Well, we had done a live shot about the hostage situation, and the hostage-taker Pooley, his mom and his sister saw it. And they come up to me, and they had my phone number, and right before my 10:00 live shot I get the phone call. My phone rings and it's him. And after sort of freaking out for a moment, I mean, I just started talking to him. He was telling me the same thing. He had also been talking to police negotiators, but over and over again he was going to kill that boy. And in fact he was threatening us, saying if we didn't put him on the air live he would kill the boy. And of course, I told them we can't do that, but it was pretty intense.

HANNITY: Yeah. It raises a moral dilemma, obviously. And he's even saying, and he's forthright with you, he's the only chip in this whole game and he doesn't want to go back to jail. Were the police monitoring that? I couldn't tell from you live shot whether the police were there at the time that you were talking to him.

HAYDEN: For part of the time. What happened, like I said, I was getting ready for a live shot. So they were watching back in the control room. And then I get the phone call, and immediately the photographer realizes what's happening. He calls the station. They called police, and it took them awhile to get the police over there. And then at one point one of the police officers put the photographer's headphones on and was listening in.

And I just said a quick prayer, saying please help me find the words and the way to not to do anything wrong and to help if I can. But he was explaining to me that he had the boy tied up in a bathtub in an interior room so the police couldn't see him. And the family had several dogs, and he had stationed dogs in various rooms. And he told me, he said if I hear those dogs bark, the boy dies - if the police were to come in. So the police had a very tough situation.

HANNITY: Especially, knowing that, hearing that ahead of time. This story does have a good ending. The 13-year-old boy that was taken hostage was set free. This person is dead. Tell everybody how this whole thing came to an end.

HAYDEN: Well, what happened is, this had been going over 18 hours, which is really long, as you can imagine -- especially for the boy and his family. What happened is is the police -- he'd asked for breakfast. So the police were delivering breakfast. And they have -- as they always do in these situations -- snipers stationed around. And my understanding is that when Pooley, the hostage-taker opened the door to get the breakfast - and I've know learned he had the boy right next to him -- but the sniper took the shot, shot him, and immediately the SWAT officers rushed in and brought the boy to safety. Pooley was immediately killed.

HANNITY: Julie, last question, how long was the total time you actually spent on the phone with him?

HAYDEN: Well, that phone call was 15 minutes and they called back a few times during night. So probably about 25 minutes.

HANNITY: Unbelievable. Well, you did a great job. Thank goodness for police in this case. They did an awesome job. Great reporting and thank you so much for joining us.