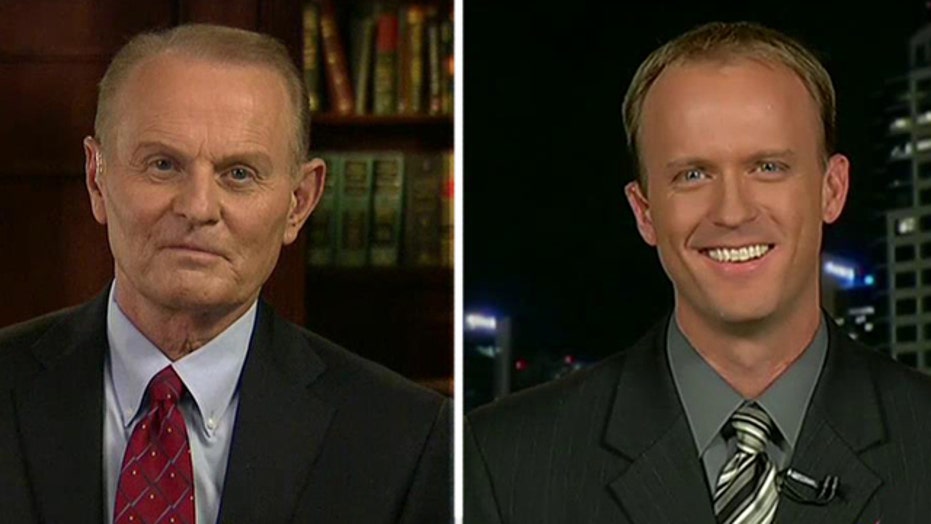 Pastors speak out about the ordinance

This is a rush transcript from "Hannity," October 15, 2014. This copy may not be in its final form and may be updated.

SEAN HANNITY, HOST: It is a shocking story out of Texas where the city of Houston has issued subpoenas demanding that a group of pastors turn over their sermons as part of a battle to enforce an equal rights ordinance in the city. Now, ministers who fail to comply with the subpoena could be held in contempt of court.

We reached out to the Houston's mayor's office. We received the following statement saying in part, quote, "The mayor agrees with those who are concerned about the city legal department's subpoenas for pastors' sermons." The statement continues, quote, "Neither the mayor nor city attorney David Feldman were aware the subpoenas had been issued until yesterday. Both agree the original documents were overly broad. The city will move to narrow the scope during an upcoming court hearing."

Here to detail their fight for the First Amendment is the Grace Church co-founder Pastor Steve Riggle and from the Alliance Defending Freedom Erik Stanley is with us.

Pastor, we'll start with you. Did you get one of the letters, subpoenas?

PASTOR STEVE RIGGLE, GRACE CHURCH CO-FOUNDER: I did. Yes, I did.

HANNITY: What did it say?

RIGGLE: Well, it wanted my sermons and e-mails and texts and anything that had been said about the equal rights ordinance or including Mayor Parker, if I had ever said anything about her. Communication with congregation, wanted any of that.

HANNITY: What I have read is I guess this is the first openly gay mayor of the city, correct?

HANNITY: OK. They passed an ordinance where men can use the ladies' rooms and ladies can use the men's room, correct?

RIGGLE: Well, they passed an ordinance that has to do with public accommodations, gender identity, and gender expression, which basically mean that however you express yourself, doesn't matter biologically what you are, that that's what you are on that day.

HANNITY: So that would mean, as I'm interpreting it here, that men could use the women's room and women could use the men's room, et cetera.  And I understand that there was a referendum movement where you would need 17,000 signatures. You got over 50,000, but yet they still rejected it.  Is that true?

RIGGLE: We had a company conduct a poll in the city. And 82 percent said they were not for the ordinance. We gave it to the council, to the mayor. They passed it anyway. And so we enacted a referendum, a petition drive. We gathered 55,000 signatures. We needed 17,200. Of those 55,000 the city secretary stopped counting a little over 19,000 because we had passed a threshold of acceptable signatures. And then the city attorney threw out more than 30,000 of the signatures.

ERIK STANLEY, ALLIANCE DEFENDING FREEDOM: You're exactly right, Sean.  This is an unprecedented attack on the First Amendment rights of pastors.  The city of Houston has subpoenaed these five pastors. They are asking for 17 different categories of information, including text messages between their congregation members and the pastor and including the pastor's sermons on issues like homosexuality, gender identity, or the mayor. And these have no relevance to whether there are enough signatures on the ballot -- to put this issue on the ballot. And in addition, as you noted, it violates the First Amendment rights of these pastors. This is nothing more than retribution.

HANNITY: It seems like that. We've now gotten to the point you must hold specific views on controversial issues even if they contradict your faith, is that where we're now headed? In other words -- go ahead.

STANLEY: Well, according to the city of Houston that is exactly what they say. They want to be the arbiters of what is right and wrong. And now they want to troll through pastors' sermons to determine if what they said was true or false. They don't get to make that determination. And contrary to media reports, the city is not backing off. The mayor actually tweeted on her page that if the pastors were talking about this issue from the pulpit their sermons are fair game. Do we really want government officials to be trolling through the content of pastors' sermons?

HANNITY: Pastor, I'll ask you this. From my perspective, under no conditions should you comply with this unlawful edict and set a precedent this way. Are you willing to go to jail to defend your rights to preach and freedom of religion?

RIGGLE: I'm very willing for the mayor and the city attorney to have my sermons if they'll agree to read them. I would give them to them. But I'm not willing to hand them over because the state demanded that I do that. And that is why we have Alliance Defending Freedom involved in this.  And I'll tell you this. With all due respect, there is no one that knows the mayor or the city attorney who would believe they did not know about those subpoenas until yesterday.

HANNITY: If you need it, I'll come and bail you guys out. I believe in freedom of religion. And regardless of what other pastors, I don't know if it's the same denomination, but I'd be glad to bail you guys out, and I'll even bring you a cake with a file if you get sent to jail for preaching what you believe is your deeply-held religious faith. All right, that is my promise. I'll bail you guys out.

HANNITY: All right, thank you both.