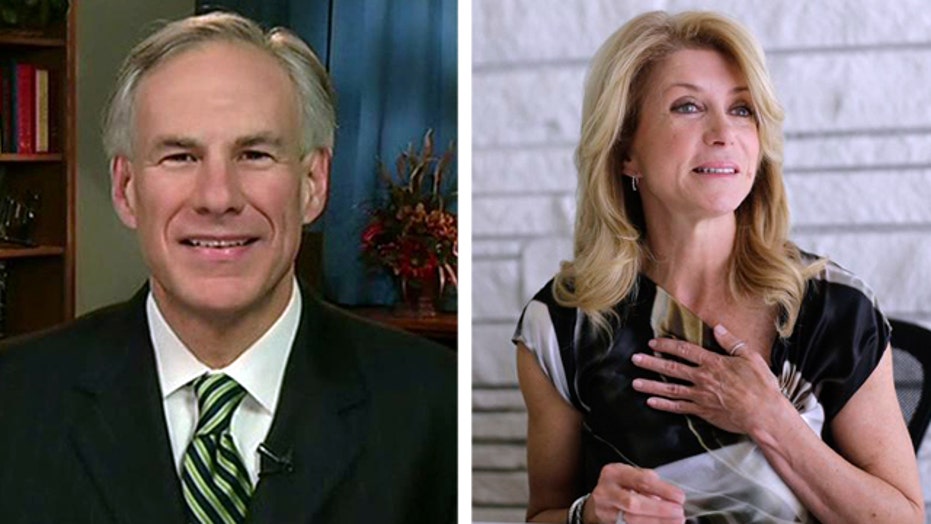 Abbott reacts to hidden camera remarks about him

This is a rush transcript from "The Kelly File," January 23, 2014. This copy may not be in its final form and may be updated.

MEGYN KELLY, HOST: Breaking tonight, ugly new video surfaces in a political battle getting national attention. And Republican Greg Abbott is here to respond to the attacks on him captured by hidden cameras.

Good evening everyone, and welcome to "The Kelly File," I'm Megyn Kelly. And we start with an exclusive.

We have seen national attention focus on the Texas governor's race after Wendy Davis, a rising star in the Democratic Party in Texas, was caught stretching the truth on her life story. Ms. Davis has responded by attacking the media and by blaming her rival, Republican Greg Abbott, the current Texas attorney general.

Late today, video surfaced from conservative filmmaker James O'Keefe. He claims to have gotten under cover cameras into meetings held by Democratic group called Battleground Texas, where the issue of Greg Abbott and his handicap came up. We are still vetting this tape, but we know what it says, and so does our guest.

Joining me now, Texas Attorney General and Republican candidate for governor, Greg Abbott. Mr. Abbott, it's very good of you to be here. Thank you for coming on.

As I say, we continue to vet this tape, but we've seen it. And in the transcription and in the videotape of it, you can clearly hear these women who purport to be a part of a group called Battleground Texas, trying to turn Texas blue, and supporters of Wendy Davis, talk about your being a paraplegic, laughing about it, saying they think it's amazing you're in a wheelchair but you have no sympathy for anyone in any way, you may have a personality disorder, you don't speak very well or have a good personality, and you're in a wheelchair in response to what the audience cackles with laughter. Your response, sir?

GREG ABBOTT, R-TEXAS ATTORNEY GENERAL: Well, Megyn, denigrating the disabled is unworthy of Texas. The reality is, Texans look far beyond superficial appearances. What Texans really look at is depth of character.

Megyn, there is a reason why I have been elected statewide in Texas five different times. That is because Texans know I have the quality and depth of character to represent their families and their values.

KELLY: You know, this comes a day after Ms. Davis herself was accused of making an insensitive comment. She has turned around and attacked you. And in the context of it, she came out and said, that clearly anybody who doesn't understand her story has not walked a mile in her shoes, which led others on the Internet to say once again it is a veiled shot at your disability. What do you think?

KELLY: What do you think about her suggestions that you had something to do with what she calls the attacks on her life story? Have you had anything to do with it? Did you speak with the Dallas Morning News, did anybody from your campaign speak with them? Are you behind this article, which it must be said was revealed -- they revealed the truth about her history in a very gentle way.

ABBOTT: The author of that story, Wayne Slater, indicated publicly in a tweet himself that he had zero contact with my office about that story.

But all of these, Megyn, are just distractions, because what really matters are not all of these background stories. What Texans really care about is what we're going to be doing fighting for their future.

KELLY: Your office did come out with a statement suggesting that if she was going to mislead about her personal biography, what else will she mislead about? Do you stand behind that? Do you believe this is an issue or not?

ABBOTT: Well, it's going to be up to the voters to decide what issues are relevant, and which issues are not, which candidate can best represent them and their values in their future. And I think both my story, my history and what I stand for and what I have done for Texans will help answer that question.

KELLY: OK. But respectfully that sounds like a dodge, and I mean that respectfully. Because you put out a statement and you went after her. And this is not before the Dallas Morning News article, it is after. And you said if you can't trust her to be honest about her history, what can you trust her to be honest about? What else does she misstate? Do you stand by that?

ABBOTT: Well, again, those are going to be issues Megyn that the voters of Texas just have to decide on their own as they develop their own idea about the kind of person they want to govern the great state of Texas.

KELLY: That interview was recorded a little earlier this evening. We reached out to Battleground Texas, they call this new video a hit job, they say it is clearly edited and not true. The filmmaker James O'Keefe says the comments were presented fully in context.

And late this evening, Wendy Davis released a written statement as follows, quote, "The language you use in this video about Greg Abbott is abhorrent, Greg Abbott has persevered through great personal challenge to raise a family, have a productive career, and for that, he deserves our respect."

We have also invited Ms. Davis to come on "The Kelly File" repeatedly. We hope she will join us soon.