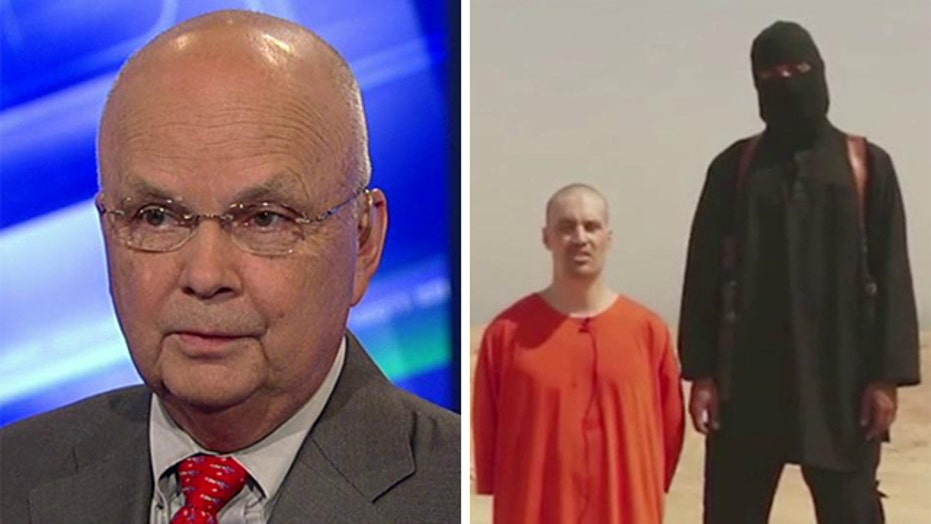 This is a rush transcript from "The Kelly File," August 19, 2014. This copy may not be in its final form and may be updated.

MEGYN KELLY, HOST: Shortly before we came to air, I spoke with General Michael Hayden in an exclusive interview. He's a current principal of the Chertoff Group and former director of the NSA and the CIA.

KELLY: General, great to have you here on such an important night.

KELLY: Not only did they reportedly kill James Foley, but they have another journalist Steven Joel Sotloff who worked for Time Magazine among other publications, who they are threatening will meet the same gruesome fate if we don't change our policies in Iraq and withdraw are troops from Iraq. This man's life they say depends on President Obama's next decision. This is terrorist rhetoric, and yet they need to be taken seriously, given what we saw today. Put it in perspective for us, please.

HAYDEN: Sure. It's not just terrorist rhetoric Megyn, it's terrorism, the literal definition, the killing of innocence for political effect. And that's exactly what this is. Now, I can imagine what's going on inside government right now, they're trying to confirm the video, actually more or less they're trying to look for evidence to make it not true. And they probably won't find that. So, they'll quickly determine it is true, and now they need to figure out what to say about that, and I don't mean to say they're trying to be manipulative or evasive, it's really important what the American government says. Because there are a lot of audiences for the next American statement on this not just ISIS, but our Iraqi and Kurdish friends as well.

KELLY: How big are the stakes right now?

HAYDEN: Well, look, the president articulated a policy which is very limited, at least in the way he described it. We're going to prevent genocide, we're going to protect Americans inside Iraq. Most recently in Erbil. But the American support for the Kurdish Iraqi move against the Mosul dam? That actually had American air power in close support to an offensive operation. We have already gotten beyond the president's rhetoric in terms of what it is we are doing on the ground in Iraq. And frankly, my point of view, we need to do more. Preventing genocide is a virtue. Protecting Americans is a virtue. We have a fundamentalist radical state now in the middle of the Middle East. We can't let that stand.

KELLY: What are we going to do about this other American who is under threat right now?

HAYDEN: Well, again, that's why we have to be careful with our messaging. And what it is we say publicly. But frankly Megyn, since I'm not in the government, I'm a little more free to say, we have to look to the broader interest in the United States. We have to look at all sorts of lies that are at threat in Iraq.

KELLY: Is how that the decision -- because, you know, we're coming of a period where we traded, you know, these top Taliban generals for the life of one American soldier. These are American journalists. But what would they be doing? Obviously, there is an interest in saving the lives of Americans, even if it might be to the overall potential risk of America, it has to be a calculation, but what would the analysis be here.

HAYDEN: Well, first of all, the analysis is, is there anything we can do to prevent it? And here, I just don't know what kind of intelligence we might have.

HAYDEN: Frankly, I doubt it, but if we did, given the current circumstances, you might be more embracing of risk for the -- force, given the specific circumstances that we now have.

KELLY: Who would make that call?

HAYDEN: All the way up to the president --

KELLY: Who would be making the recommendation?

HAYDEN: The chairman of the joint chiefs.

KELLY: And do you believe that they're game planning this right now? I mean, what do you think is --

HAYDEN: Based on reality. You have to have information where the journalist might be, absent that, this is all theoretical.

KELLY: How significant would this be in the government as obviously -- and the rest of us are obviously following this very closely, but how significant an event is this?

HAYDEN: No, look, our government despite that kind of popular thought that it's a black box, input in and output out, is comprised of human beings. And then look at this video too. They are emotionally affected by this, you know, we were chatting before we went on the air, that Iraqis have been beheaded. But this one seems more personal.

Well, it's not that human lives have any different value, but this is one of our own, this is -- this is someone from our own village, from New Hampshire. This affects the people in the Situation Room and in the Oval Office, the way it affects you and me. And so, they -- this sets high emotional impact.

I remember what it was like when we saw that Daniel Pearl had been killed by Khalid Sheikh Mohammed.

KELLY: I mean, there was a time in this country where this was happening, and it changes the -- it changed public opinion to some extent about what we were doing over there, because it was so gruesome, and beyond the capability of the average person to grasp, to understand the barbarism despite the reports that we've heard about what this group is doing. I mean, what should the mission be in the face of this kind of evil?

HAYDEN: Well, again, as I tried to say earlier. Prevent genocide of course. Try to stabilize Iraq of course. Protect the consulate in Erbil of course. But fundamentally, what we've seen with this video is the character of the Islamic State. Do you want that to continue to exist and thrive and grow and be able to threaten other Americans? Other westerners, other moderates throughout the world? I mean, that's the fundamental question that we now face as a nation.

KELLY: OK. But you know that there are many people in this country who believe this wouldn't have happened, he wouldn't have been beheaded. They wouldn't be under threat as they are now if we hadn't started bombing Iraq again. That's how a lot of people think, and they hear you saying, we need to be more aggressive in the operations. And they say, we will be experiencing more of this if we do that.

And so frankly, Megyn, I know all about the war. I'm tired of war myself. And this may be a question of pay now or pay later. And paying later may actually a much higher bill.