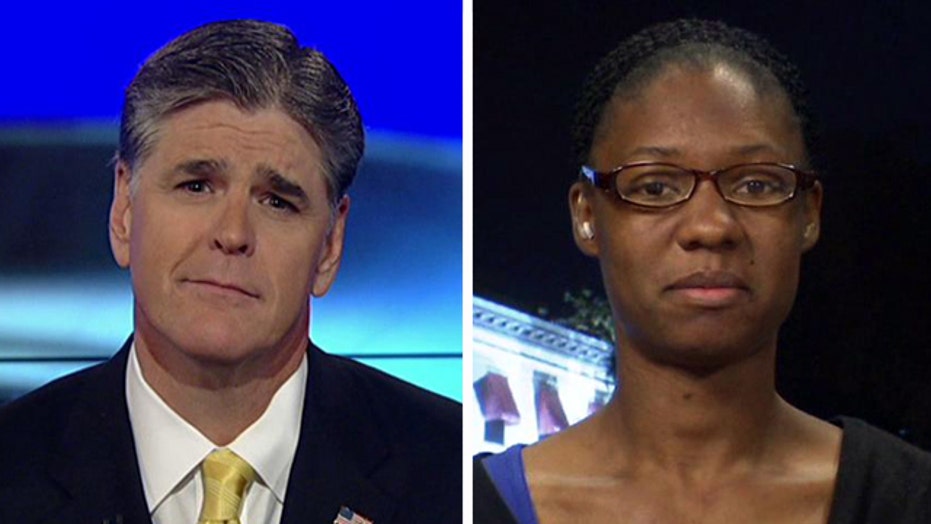 This is a rush transcript from "Hannity," October 24, 2013. This copy may not be in its final form and may be updated.

SEAN HANNITY, HOST: That was President Obama on Monday urging people who were trying to sign up for ObamaCare and couldn't get online to call the hotline. On my radio program we took the president, we took his advice, we called the number he gave out, and a very nice, very pleasant woman named Earline Davis picked up and answered every question we had, was very patient. Here is part of the conversation.

EARLINE DAVIS, FIRED OBAMACARE OPERATOR: My name is Earline Davis. How may I help you?

HANNITY: You're on the radio with Sean Hannity. Is it Eileen?

HANNITY: That's who I want to call. You're on the radio. Is that OK with you? You have to say yes if you want to be on.

DAVIS: My name is Earline.

HANNITY: However, the very next day Earline was fired. She joins me now to explain why. Earline thank you for being with us. I appreciate you coming.

HANNITY: By the way, you were kind, patient, helpful. You answered every question. Wasn't that what your job was, to answer the questions? The president gave out the number.

HANNITY: Did they ever tell you that you can't answer questions on a radio show? Was that part of your training?

DAVIS: No, sir. I never knew about that.

HANNITY: Yes. OK, so you took my call, you answered all our questions, which I think was a benefit because we have a big radio audience. We are on over 500 stations, and so that would result in fewer people calling. But the next day, what happened?

DAVIS: They fired me.

DAVIS: I got escorted to H.R., which is human resources, and it was four of us including myself in the office. They locked both the doors and they waited until they had me on speakerphone with one of the head ladies. Then they finally got in contact with her. And I could barely understand what she was saying, but I did hear she said we can't have that type of stuff at the job and that we have to release you. That's when I put my badge down on the desk.

HANNITY: Wow. Then what happened? Were you escorted out?

HANNITY: They didn't let you go back to your own locker?

DAVIS: No, sir, they did not let me go to my locker.

HANNITY: How long had you worked there?

HANNITY: OK, so this was a new job for you. You went through the training. They never said you couldn't do this and you were answering the questions, right?

HANNITY: I'm not really sure why they did this. You were on my radio show today. I feel terrible about this for you.

HANNITY: I can say you live in Panama City. That's OK, right?

HANNITY: So the response today after we gave out -- we set up a special site -- e-mail on my website, Jobs@Hannity.com. It's been overwhelming and we'll send the e-mails to you. People want to send you stuff.

HANNITY: People are stepping up. We already have one job offer we know of for you. We'll pass it all on as quickly as we can.

HANNITY: What is your reaction to people wanting to help you this way?

DAVIS: I wasn't really expecting much of anything. But it's a blessing from God. So I'm really happy.

HANNITY: Yes. I'm happy. Just for people who didn't listen to the radio show, we calculated what your yearly income would be, and I'm going to gift money to both you and your son and give you a year's salary so that you don't have to worry in this interim while you are waiting for a job. I hope that makes you happy, too.

DAVIS: Yes, sir, it does. Thank you so much.

HANNITY: Did you learn anything from this? Are you surprised that Kathleen Sebelius still has her job and you got fired for doing yours?

HANNITY: A little surprising. Over the years I have had frustrating people when you make phone calls. But you were one of the nicest, kindest, most helpful people. And we'll make it right for you. We really appreciate you telling the story. You did not deserve this to happen to you so we're going to help you out.

DAVIS: Thank you so much.

HANNITY: All right, Earline, thank you very much. We'll be in touch, OK.