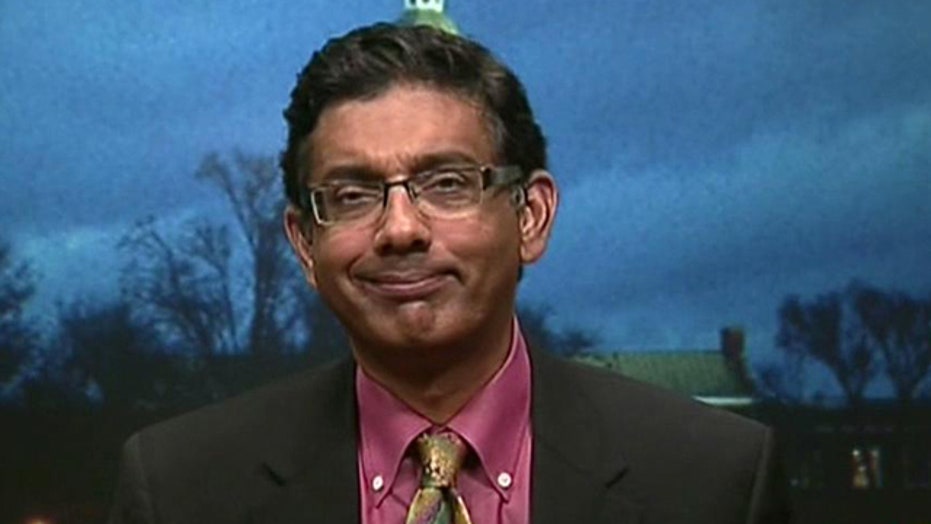 Filmmaker speaks out about the controversy

This is a rush transcript from "Hannity," January 31, 2014. This copy may not be in its final form and may be updated.

SEAN HANNITY, HOST: My next guest, conservative filmmaker and author Dinesh D'Souza, is the latest victim to be targeted by the Obama White House. Now, he was indicted last week for allegedly violating campaign finance laws, and he's also the man behind the anti- Obama documentary "2016: Obama's America."

Now, remember, his indictment comes after the IRS harassed conservative groups last year and after the disgraced tax agency recently placed extra security and scrutiny on a group of conservatives in Hollywood.

Joining me now for a "Hannity" exclusive, the man himself, filmmaker, author Dinesh D'Souza. Dinesh, welcome back to the program.

DINESH D'SOUZA, FILMMAKER & AUTHOR: Good to be on the show.

HANNITY: All right, I'm sure it's not fun. You're now in the legal process, what can you tell us about it?

D'SOUZA: Well, as you can imagine, it's been quite a week. I will say -- I can't really talk about the case. But I will say that I'm determined to continue my work. I'm making a big film called "America,"

which is about the greatness of America that's going to come out for July 4th this year. So I just want to say that I'm undeterred and I'm marching full speed ahead.

D'SOUZA: Well, I will say that the film "2016" was a film that does seem to have gotten under President Obama's skin. And the reason for this is it wasn't just a critique of ObamaCare or policies. But I in a sense went into Obama's world and also into Obama's mind. There I was at the Obama family homestead in Kenya. I interviewed his brother.

And of course, we advanced a thesis that here is a traumatized and somewhat of a messed-up guy, who is, in a way, haunted by the dreams of his father, the topic of his own autobiography. There was a rant against the film on Obama's own Web site, which is BarackObama.com, so we know the film rattled him. We know the film upset him. And whether this is a kind of payback remains to be seen.

HANNITY: Yes. All right, well, it's going to be interesting to watch this, certainly targeting conservatives. I think that's been pretty well proven, and I think, over time, more information'll come out about that.

One of the things about his background that I focused on back in 2007 and 2008, not only the Reverend Wright, but this guy by the name of Bill Ayers. Now, Obama started his campaign in Ayers's home. He gave speeches with him. He sat on boards with him, was only asked one time about the relationship with him, and said, George, he's some guy in the neighborhood.

You got to debate Ayers last night, and we got a piece of the tape. Let's roll it.

So my question is, what happened to that old revolutionary? Is he still alive, or has he thrown in the towel?

BILL AYERS, FMR. WEATHER UNDERGROUND MEMBER: No, I think that -- I actually feel that I still am a revolutionary, if by revolutionary you mean -- if what you mean by revolutionary is having a fully worked out program by which we can kind of imagine a different world and overthrow a government and move forward. No, I'm not that. But if by that you mean somebody who's willing to dive into the contradictions, try to make sense out of them, try to fight for more peace, more justice, you know, more balance, more sustainability, and being willing to ambiguity and complexity and try to move forward? Sure, I still consider myself someone who sees the need for a fundamental change.

HANNITY: You know, you raised a good point, that he tried -- he was involved in a group that bombed the Pentagon, New York City police headquarters, the Capitol. He's an unrepentant terrorist. He never said he was sorry for those things. As a matter of fact, in The New York Times September 11, 2001, he said, I wish I did more.

What was your impression of him?

D'SOUZA: Yes, he not only said that he wishes he did more then, but he said he won't write off the policy of doing the same thing again under certain circumstances now. I think it's very interesting that Bill Ayers, and also his wife, Bernadine Dohrn, who was a kind of a co-conspirator with him then -- they've both become very well established university professors.

And I think this is a way in which some of the most unrepentant radicals of the '60s have figured out that there is a way to transform the system, to achieve the same revolutionary goals, but to do it through the classroom, to do it by shaping young minds.

This is kind of why I wanted to debate Ayers on the campus to sort of test his ideas on a liberal campus, in fact, my own alma mater, Dartmouth College...

D'SOUZA: ... and sort of show him up in front of the students.

HANNITY: All right, Dinesh D'Souza, we'll follow your case closely. Thanks for being with us.

D'SOUZA: It's a pleasure.