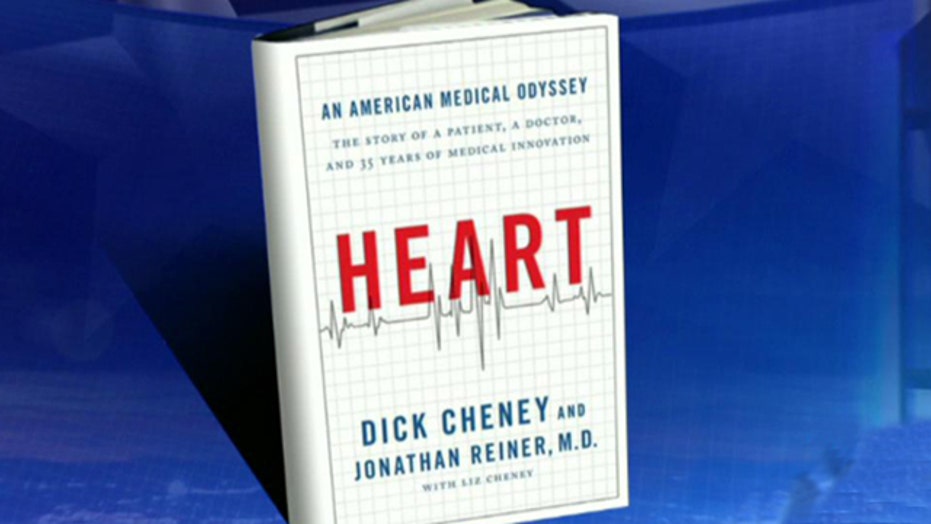 Former Vice President opens up about his battle with heart disease

This is a rush transcript from "Hannity," October 21, 2013. This copy may not be in its final form and may be updated.

SEAN HANNITY, HOST: Former Vice President Dick Cheney's health struggles have been well-known for years with his five heart attacks and most recently a heart transplant. Now for the first time ever the former vice president is opening up about his medical conditions and his 35-year battle with heart disease. His brand new book which he co-wrote with his long-time cardiologist "Heart: An American Medical Odyssey" is in stores tomorrow. He joins us for his first cable interview.

Mr. Vice President, how are you?

DICK CHENEY, FORMER VICE PRESIDENT: It's great to be back.

HANNITY: I remember -- I'm trying to put the time in my mind with the book. I interviewed you at your house after you left office.

HANNITY: You were in pretty bad shape.

CHENEY: That was a rough patch really. I left in January of 2009. Over the next 17 months I went from a serious heart patient, but at the end of 17 months I was in end stage heart failure, near death.

HANNITY: You were telling me you were on with Dr. Oz today.

HANNITY: He had all different sized --

CHENEY: He's a heart surgeon himself and knows a lot about the business. He had a tray out in front of us on the table covered with a blue cloth, and then some gloves, you know. They put on the gloves and pulled back the cover and there were three real hearts, not models. A little one that was normal size, mid-sized one that had an LVAD, the pump I had on mine, and then a big one. Of course mine by the end -- and it lasted me 70 years, I don't want to be critical of it. It was more than twice the normal size from all the scar tissue and the sort. He had a very vivid display there. He picked up the heart and hand it to me and what do you think of that, and I would pass it off to Jon Reiner.

HANNITY: You took a picture of how big yours was at the end. How big?

CHENEY: It was close to six inches across. Normal size would be about the size of two hands clasped together. After five heart attacks, seven cardiac arrests, an implantable defibrillator, an LVAD, a pump attached to the left ventricle which kept working the last 20 months until I could get a transplant, all the work that was done to it over the years, it's all gone now. The only thing left that shows I was a heart patient is I have a scar down the middle of my chest where they went in three times to do open heart surgery. I have a brand new heart inside, and all the mechanical and electronic gear and so forth is all gone.

HANNITY: You have dedicated among the people in the book also to the person who donated it.

CHENEY: The donor, absolutely. It wouldn't have happened without a donor and the donor's family. I don't know anything about the donor. I just know their heart was in much better shape than mine. After one year after the surgery they go back in and do a complete catheterization of the arteries of the new heart. Those arteries are perfectly clean. There's n blockage of any kind. I probably haven't had a heart that clean since I was a teenager.

CHENEY: Well, a couple of things that stand out. First of all, I reached the point where, you know, you adjust after you have had heart disease that long. I was convinced that eventually I would die of heart disease, that we'd run out of time and out of treatment, the technology wouldn't keep ahead of my disease. And now all of the sudden when you get the new heart your life opens up before you again. You don't know how long you're going to live. You are back to the normal expectations. You can't set a date out there when you're certain that you're going to hang it up.

The other thing is the sense that I can get back and do what I wanted to do. I reached a point towards the end on the old heart where I had trouble getting out of a chair. All I wanted to do was get out of bed in the morning and walk to my office and sit back down in the chair. Now I throw 50 pound bags of horse feed in the back of my pickup truck and I don't even think about it. I'm back doing those things. The only thing I can't do is ski. But that's got nothing to do with my. It's because I have bad knees.

HANNITY: You said you believed you were approaching the end of your days. You were pain-free, at peace, and you felt you led a remarkable life. Were you resolved to the thought that you thought you were going to die? Did you believe that?

CHENEY: I did. I reached the point of end stage heart failure. The heart had gotten so weak after five heart attacks, sudden cardiac arrest, and all the surgeries and so forth that there really were no options left. Except that's when the LVAD pump came on the scene.

I knew given where I was at that it was only a matter of days and eventually a matter of hours. When they did the surgery to put the pump in to sustain the heart I was -- my kidney and liver were shutting down. The heart simply wasn't moving enough blood to feed my vital organs. They worked on me nine hours on an emergency basis one night, used over 20 units of blood. It was the toughest procedure I had to go through. Part of it was because I was weak because I was so sick. My heart had worn out in effect.

I came back out of that. I had pneumonia as I recovered. I was on a respirator for weeks, heavily sedated, and had to work my way to get back to the point where I was healthy enough to get a transplant.

HANNITY: When this first started, you had your first heart attack at 37?

HANNITY: Thirty-seven years old. Was that -- I have heard somebody describe it like a car on your chest. Was that what it felt like to you?

CHENEY: No. With me it was very different. I had a tingling sensation in two fingers of my left hand. That was it. I had no chest pain. I didn't sweat or anything like that. I woke up in the middle of the night. I was on a campaign in Cheyenne, first run for Congress, staying with a friend. And the thing that triggered it in my mind was I had a first cousin who was a doctor himself who had had a bad heart attack just a few weeks before. That I think is what triggered the thought in my own mind that I need to have it checked out. So I woke up the people we were staying with. They drove Lynn and I to the hospital. I walked into the emergency room, sat on the table, and passed out. I was having a heart attack. But that's the only symptom I had was just the tingling sensation.

I guess a big part of the story is that you ended up quitting smoking then and technology stayed one step ahead of you.

HANNITY: Explain that part of this.

CHENEY: If you think of the things that kept me going, cholesterol-lowering medicine came in '88. It was Statin. It was a miracle drug from my standpoint because that was one of my biggest problems was a very high cholesterol level. The implantable defibrillator, that was like the set of paddles they use to restart you when you go into sudden cardiac arrest. In my case, my doctor Jon Reiner, who co-wrote the book with me, was wise enough to suggest back in 01 that I should have an implantable defibrillator, like a pacemaker but with the added feature of being able to measure your heart rate and shock it back into normal rhythm. Nine years, eight years later, that's exactly what happened. That defibrillator saved my life.

HANNITY: They had to reprogram --

CHENEY: Well, there was a problem because the latest version which I had by then was capable of being programmed remotely, which was a nice feature in terms of being able to manage it. But as vice president the concern was --

HANNITY: Somebody could kill you.

HANNITY: One of the number one killers of everybody. Great advice here. Great counsel, and also it shows what medical innovation has done.

CHENEY: What I hope it does too is convey the notion that there is hope.

CHENEY: And there are 80 million Americans out there who have some kind of heart disease. I look at an audience when I make a speech, and I can say with a fair degree of accuracy every fourth person has or will have some kind of heart problem in their life. Part of the story we want to tell here is to show the dramatic improvement in our capabilities of dealing with heart disease over the last 40 years.

HANNITY: It's amazing. You have stayed literally one step ahead. You were the guinea pig the whole way.

CHENEY: It was far enough along so it all worked for me. Obviously there was a lot of luck involved, prayers from a lot of people when I went through the rough spots. My family was unbelievable. Lynn had to nurse me every day, had to change my dressing for 20 months while I was living on a pump.

CHENEY: It was an awful lot of people contributing to the effort, and for that I will always be grateful, especially to the donor.