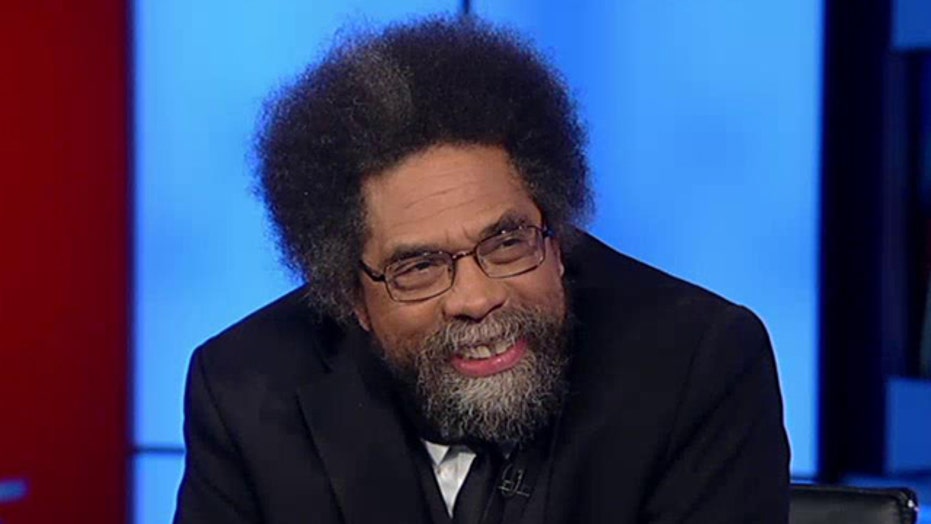 This is a rush transcript from "Hannity," October 22, 2014. This copy may not be in its final form and may be updated.

SEAN HANNITY, HOST: Details regarding the investigation into the shooting death of Michael Brown are beginning to leak, and according to former St. Louis police County chief Tim Fitch, it is, quote, "unlikely" that Ferguson police officer Darren Wilson will be charged by a grand jury. Listen to this.

TIM FITCH, FMR. ST. LOUIS COUNTY POLICE CHIEF: It was an intentional release by someone familiar with the federal side of the investigation, in my opinion, for the sole purpose of preparing the community for what may be seen as many as bad news that there's not going to be federal charges.

HANNITY: Here now to discuss the very latest revelations out of Ferguson, author of the brand-new book -- there you see it -- "Black Prophetic Fire," our friend, Professor Cornel West, is with us. How are you, my friend?

HANNITY: Good to see you. Enjoy having you in studio.

HANNITY: All right, what we're hearing is -- and I'm reading from The Washington Post -- "More than half a dozen unnamed black witnesses have provided testimony to the grand jury in St. Louis largely supporting Wilson's account of the events that happened" -- and that is that he reached in the car, was trying to get the gun, which explains why the first shot was fired within the car, and that, in fact, he was the aggressor threatening the officer's life.

HANNITY: Were they nice to you when they arrested you?

WEST: It was a little rough going in. I got a little hole in my suit. I don't have a whole lot of suits. You know that (INAUDIBLE)

WEST: But once we got inside, they were very kind. And we were telling them, "We want you to be as kind to us -- kind to young people as you are to us."

But back to this case, though, brother. I think we all have to have a sense of integrity and simply be committed to a fair trial.

WEST: Well, but they have to have a transparent process. You can't just keep this thing under cover and then leak this and leak that. We have to have a fair trial to make sure that our -- their system (INAUDIBLE)

WEST: (INAUDIBLE) sure that the system is proceeding in a fair and just manner.

HANNITY: You've been a critic of Barack Obama. Every election season -- this drives me crazy. I'm a conservative. I think we're all children of God. I don't like racism...

WEST: We surprise a lot of people because they wonder, "Brother West, why is it that Sean Hannity is your brother?" I said, "Yes, he is my brother. We might agree on 12 percent of things, but --"

HANNITY: We were hugging on the street of New York!

WEST: ... "he is my brother. Why? Because we're human beings, We're wrestling with what it means to be human. But at the same time, we can have our disagreements." And it's very real because when it comes to wealth inequality, when it comes to prison-industrial complex, when it comes to the plight of our children, we're concerned about it, but we have different ways of going about it.

HANNITY: Let me show a history of Democrats in election years using the race card. And then I'm going to show you what they're doing this year. Watch this.

UNIDENTIFIED FEMALE, 2000 NAACP AD: On June 7th, 1998, in Texas, my father was killed. He was beaten, chained and then dragged three miles to his death all because he was black. So when Governor George W. Bush refused to support hate crimes legislation, it was like my father was killed all over again.

FORMER VICE PRESIDENT AL GORE, JULY 16, 2008: They are in favor of affirmative action if you can dunk the basketball or sink a three-point shot! But they're not in favor of it if you merely have the potential to be a leader in your community!

Don't tell me we've got a colorblind society!

FORMER PRESIDENT JIMMY CARTER, SEPT. 16, 2009, NBC: An overwhelming portion of the intensely demonstrated animosity toward President Barack Obama is based on the fact that he is a black man.

UNIDENTIFIED FEMALE, CITIZENS FOR PROGRESS POLITICAL AD, WGMO, JUNE 24: Say no to the racist agenda of Chris McDaniel and his Tea Party.

HANNITY: All right, that's the past. Here's this election. You got a poster put out -- "Kay Hagan doesn't win, Obama's impeachment will begin," and it's leaflets that are being put in predominantly black neighborhoods.And the same thing in Atlanta. You can see right there. You got these two little girls, posters in Georgia evoking Ferguson in an effort to get out the black vote!

Does that disgust you as much as it does me? That disgusts me!

WEST: Well, I think, as you know, I have a disgust in some ways with both parties. The Republican Party has always struck me as too mean-spirited when it comes to its attitudes towards the poor. And the Democratic Party's too milquetoast, just too empty in terms of not taking a stand.

But we just have to be clear there's one standard -- stay in contact with the humanity folk across the board, no racist appeals, Willie Horton, Jesse Helms -- we got both parties...

HANNITY: But every year...

HANNITY: Isn't this to gin up the black vote, to -- to create a false narrative? You know, isn't bearing false witness one of those big commandments that we read about.

WEST: It's wrong. There's no doubt, but I think there's no doubt black brother and sisters will vote disproportionately for a Democratic Party because they still see in the Republican party too many folk when they talk about black people it's a matter of black people themselves bearing all the responsibility or most responsibility as opposed to some of the society --

HANNITY: Well, it's a party of Lincoln. It's the party of the Civil Rights Act, Voting Rights Act. People like Al Gore's father weren't there.

WEST: But Nixon's southern strategy, he knew he was appealing to some of the George Wallace folks to shift from --

HANNITY: Are these ads similar to what you condemn in the Republicans?

WEST: I condemn both of them. We have to have a higher standard.  Where is the integrity, honesty, decency across the board?

HANNITY: When are we going to do an event together? I want to be on stage.

WEST: You let me know.

WEST: You let me know.

HANNITY: The book is called "Black Prophetic Fire," you look at Malcolm X --

WEST: Oh, yes. And he was on fire with love.

HANNITY: All right, good to see you, colonel. Thank you, professor.