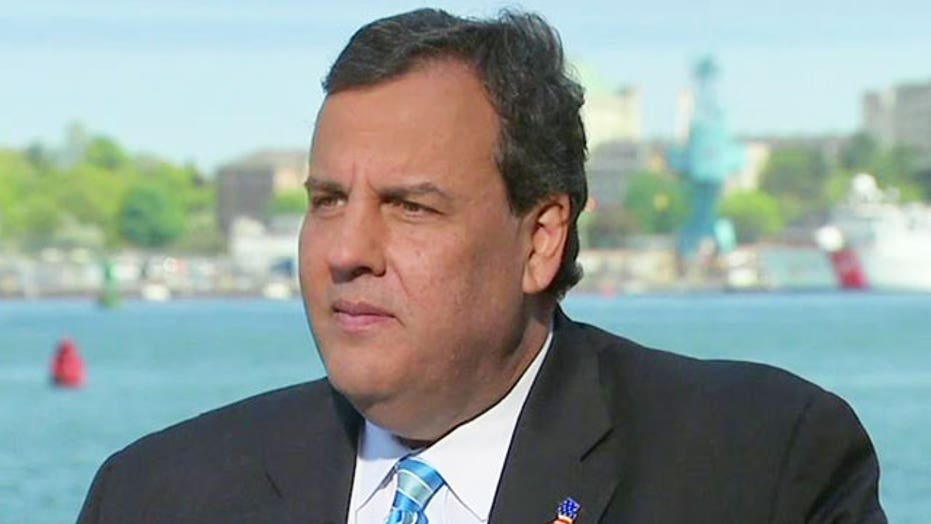 Exclusive: Christie on his possible decision to run in 2016

This is a rush transcript from "The Kelly File," May 19, 2015. This copy may not be in its final form and may be updated.

MEGYN KELLY, HOST: Breaking tonight, a "Kelly File" exclusive with a man who could shake up the 2016 race for the White House. New Jersey Governor Chris Christie delivering a big foreign policy speech in Portsmouth, New Hampshire, today. It is home to the Portsmouth Naval Yard where U.S. subs are modernized. Against that backdrop, the Governor calls for a return to strong U.S. leadership in the world, something he says President Obama has abandoned.

GOV. CHRIS CHRISTIE, R-N.J.: Once America sought to lead the world, now our President leads from behind.  Well if we want to lead from behind, we're going to be left behind. None of us, none of us should doubt our ability to lead in this new century.  This can be the second American century and it must be.

KELLY: Moments after those remarks the governor spoke with us and made the case for Chris Christie the possible candidate.

CHRISTIE: Nothing but guts in New Jersey, Megyn.

KELLY: So far there's nothing tying you to giving the order in the bridge gate scandal.

CHRISTIE: Nor will there be.

KELLY: But the case is not yet closed and so some say, what if you get incited? Are you a risky bet?

CHRISTIE: No, the U.S. attorney said in his press conference a weeks ago, that there will be no further charges in the bridge matter. He said that affirmatively three or four times. The fact is, this has been 15 months of investigation and there's been no connection to me because there is no connection to me. I had nothing to do with it, knew nothing about it and nor will there be evidence come to the contrary because it just didn't happen.

KELLY: Did you get a letter exonerating you from the U.S. attorney?

CHRISTIE: No. No letters. I was never being investigated personally. I was never -- any evidence that implicated me.

KELLY: The polls in New Jersey right now say by a 65 to 29 percent margin the New Jersey voters say you would not make a good president. They know you the best. Why shouldn't we trust them?

CHRISTIE: They want me to stay. A lot of those people that 65 percent want me to stay. I've heard that from lots of people at town hall meetings, don't leave to don't run for president because we want you to stay.

KELLY: But they say you would not make a good president.

CHRISTIE: I think people hear the question they want to hear. The fact is that polls in New Jersey will go up and down as well Megyn. I've been as high as 75 and 80 percent approval and as low as 35, 40 percent approval and it's bounced back and forth because in five and a half years because I do things, because I do things of consequence that people agree with or disagree with.

KELLY: Four years ago -- I remember covering it, there were Republicans who were begging you, begging you to run. Do you feel like you missed your window?

CHRISTIE: Oh, listen, I think everybody's going to have their moments in any campaign. Marco and Jeb will have to speak to their moments when their moments come. Not for me to judge it at this point especially since I'm not even a candidate yet.

KELLY: What would Chris Christie bring to the race as opposed to those guys who have less baggage?

CHRISTIE: For instance, I've been a leader in a state with a Democratic legislature. Nothing has been made easy for me. From that perspective, I think that's much better preparation for Washington than if you're a governor with a state that has a legislature the same party as yours. As far as Marco goes, as I've said before, I like Marco a lot, I think he's a very good guy, a very bright guy but I really believe the next president of the United States has to be a governor. You need to have the experience governing. We've had the experience of a one-term U.S. senator going to the White House and I don't think it works well.

KELLY: He says governors like you who don't deal with foreign policy every day wouldn't be ready to lead on day one, your response to that?

CHRISTIE: Listen, foreign policy is something you can learn just like anything else. You can't learn how to make decisions other than by making them. Foreign policy you can learn. And I've been working real hard over the last nine, 10 months to do it and I think the speech that we gave today is a good indication you can learn those things.

KELLY: You've said over the past week that knowing what we know now you would not have authorized the war in Iraq. Any qualms about sending that message to the families of the fallen?

CHRISTIE: No, because the honor that we give to the families of the fallen are still the same. This is about a strategic decision as president of the United States. And if we knew that there were no weapons of mass destruction in Iraq, I just don't believe we would have gone into Iraq.  And certainly if I were president, I wouldn't have authorized it.

KELLY: Governor Jeb Bush told me nation building is a good sentiment and so is exporting our values. Do you agree with that?

KELLY: Let's talk about national security and NSA and the Patriot Act. You spent a lot of time on that today during your speech in Portsmouth, and you said today that civil liberties extremists believe if we weaken our capabilities, the rest of the world would love us more. The polling is a little outdated on this, about a year old. But the latest polls show that the majority of Americans disapprove of the government's collection of phone data and internet data on us. Are you with the majority or not?

CHRISTIE: Listen, I'm with what makes sense to protect America. And there's no reason why you can't do the types of things that the NSA and other intelligence agencies are doing, do them within the law and make us much more effective in terms of protecting the homeland. I think some of that data in the poll is a misunderstanding. People think we're listening in on conversations. We're not. It's simply a misunderstanding, and quite frankly mischaracterization by some partisans who have a different agenda.

I've done this, Megyn. I was the United States attorney for seven years in one of the real hot spots for terrorist's activity in our country, in New Jersey, New York metropolitan area. And I know how effective these tools are and how necessary they are. Appropriate congressional oversight, appropriate law enforcement against anyone who goes across the line can do this without throwing the baby out with the bath water.

KELLY: What about those people who say yes, congressional oversight, great, but what we saw in this case was James Clapper sitting there with the not wittingly we don't do it which was a lie.

CHRISTIE: Listen, congressional oversight is about being aggressive and asking the right questions and doing the right digging.

KELLY: They did and they got lied to which makes people mistrust them.

KELLY: What about -- because you said today that all of these fears about the government in this area are baloney.  But you know a lot of people out there distrust the government from the IRS scandal to spying on reporters to the lies that were told about the NSA. They're at home saying really, all the fears are baloney?

CHRISTIE: The fears in this area are baloney. The fact is that no one has pointed to a specific instance where the law was violated here. I just don't believe that the right way to go here is to make us weaker in terms of gathering information. Here's what we learned after 9/11 Megyn and what the president then, President Bush told us, we cannot let this happen again. The only way to do that is to be able to intervene before the attacks are perpetrated. Not to wait until afterwards.