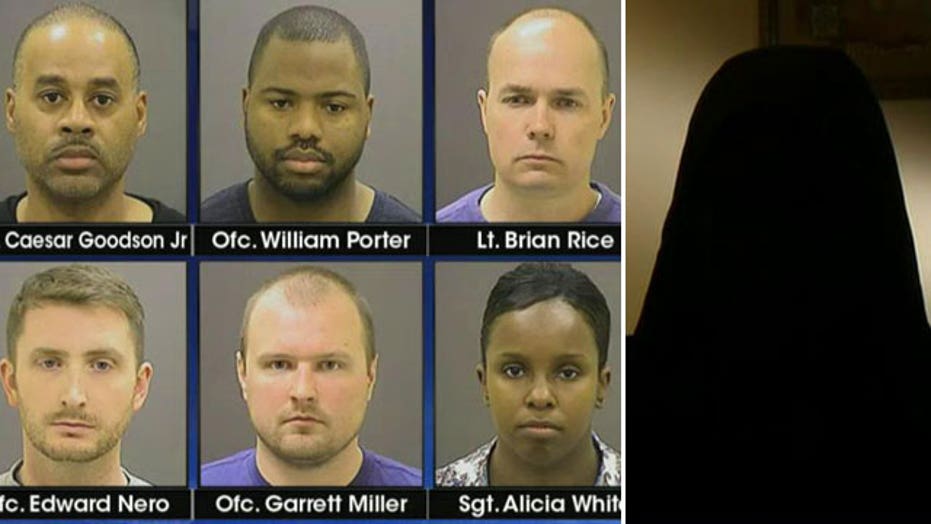 This is a rush transcript from "The Kelly File," May 1, 2015. This copy may not be in its final form and may be updated.

MEGYN KELLY, HOST: Last night we promised you an interview with another source close to these officers now under arrest, one who has actually been working with them for years. Tonight in a "Kelly File" exclusive, a Baltimore cop tells us the officers' side of the story. He asked us to call him Mike and we agreed for his safety to disguise his identity.

Mike, thank you very much for being here. And so, you know all six of the officers involved in this case. How do you know them?

MIKE: I actually work with all of them.

KELLY: How many of them have you spoken with since the incident with Freddie Gray?

MIKE: I've spoken with two of them. They were actually pretty lengthy conversation.

KELLY: And they relayed to you their take on what happened with Freddie Gray in that van?

KELLY: All right. Let's first start with whether they told you that they believed he was injured outside the van or inside the van?

MIKE: So, none of them actually have any knowledge that he was injured until they got to the station. You know, Freddie is always one of those types when you go to arrest him on the streets, he always puts on a show and what not.

So, you know, it wasn't anything out of the ordinary to them. And he you know, like I said, he showed nothing until they got to the station.

KELLY: So, Baltimore P.D. is very familiar with Freddie Gray, we know he has a long rap sheet but it sounds like you have familiarity with him, too.

KELLY: And when you say he puts on a show, what do you mean?

MIKE: He always acts, you know, extra (ph) out there on the streets. You know, he tries to just I mean, make a show, create a disturbance, get people watching what he's doing.

KELLY: So if he were in that van and shouting or jumping up and down, would that have been unusual?

MIKE: Yes, that's correct. They, I mean, he -- apparently they were saying that he asked for his asthma pump relatively soon, but, I mean, he was just a lengthy foot chase, which wouldn't seem out of the ordinary.  But he made no indication that he needed any sort of medical attention or anything.

MIKE: As far as what?

KELLY: That we're talking to you, that we're explaining what happened.

MIKE: I was talking to the officers that were actually pursuing him.

KELLY: So, did they have any knowledge really of what happened inside the van after they closed up the doors and the one officer drove away with Freddie?

MIKE: They had no indication at all. The only thing that they told me was that as soon as they put him inside the van, he started going crazy and, you know, banging his head fairly hard on the side of the wall, you know, trying to get their attention and the people in the neighborhood's attention.

KELLY: How did they know it was his head he was banging against the wall of the van as opposed to his elbow or anything else? Could they see him?

KELLY: OK,  and how did they describe it?

MIKE: Well, as far as the leg shackles go, I mean, it's not uncommon a lot of times where especially in the city, you know, people are always, you know, don't snitch, snitches get snitches, that type of thing out there. So you know, people put on a show to make it seem as if they're not going to work with the police. So a lot of times when they're around their friends and what not, they're going to put on that show. But as soon as you get them isolated, put them in the vehicle, get them out of that situation, they usually for the most part calm down. So the officers didn't probably put the shackles on him because they're figuring that he's going to calm down once they get him in the wagon.

KELLY: It doesn't always happen. Now, so those officers maintain that when Freddie Gray went into that van, he was walking of his own accord?  Because I understand that there's been a leaked medical examiner's report that suggests Freddie Gray's injury that led to his death occurred inside the van. That was the conclusion we've heard so far at least reportedly from the medical examiner. And some people on the streets of Baltimore have rejected that based on the limited snippets of videotape they've seen saying, he wasn't using his legs before getting into the van. Now, we've seen videotape where he was standing and appears to be stepping into the van which would contradict that challenge. But what did these officers tell you?

And, you know, just to say something straight about Freddie himself, I mean, going back to the snitches get stitches things, Freddie was one of those ones where a lot of times he would put on that show on the streets but you bring him in the station and he was a great witness. I mean, he helped the department solve many crimes and different acts of violence. So it wasn't uncommon for Freddie to do that type of thing and then go into the station.

KELLY: That's interesting. That's new information I had not yet heard.  According to these officers, was there any altercation between them at all other than, you know, placing the suspect under arrest? In terms of, did they hit him?

MIKE: Absolutely not. They told me that, you know, they chased him because he ran and the place that he ran from, I mean, it's a place where he's commonly been locked up for selling drugs out of that alley. That, you know, it wouldn't surprise me that the reason that he ran was he was probably dirty, he was probably selling drugs and at no time did they say they used any use of force.

KELLY: Did they say why they arrested him in the first place? Because they've come under criticism saying, well, they looked at him, they said, he looked at them and then he ran. There's no crime against doing that.  If that happened between me and a police officer, he wouldn't have the right to place me under arrest, even if he then found a switch blade on me, which was the second part of the story.

Just so happens that when they got to him, he had a switch blade on him. Whether that's the reason he ran, you know, I don't know. He could have had drugs. It's not an uncommon thing that when, you know, the people that are running, if the dealers that are running, if they throw drugs, if we can't find him, we can't charge him just because they ran. We have to have some sort of crime.

KELLY: Right. So, what was he's being charged with here?

MIKE: He was charged with a switch blade, I guess, is what they ended up charging with him with. But it doesn't mean, I mean, my personal guess to this and this is just me speculating, is that he was committing some -- he was distributing narcotics in that alley.

KELLY: Uh-hm. And was he known to do that in this particular area?

MIKE: Oh, yes. That's where he's been locked up numerous times in that exact alley that he began running from, he was locked up for distributing narcotics.