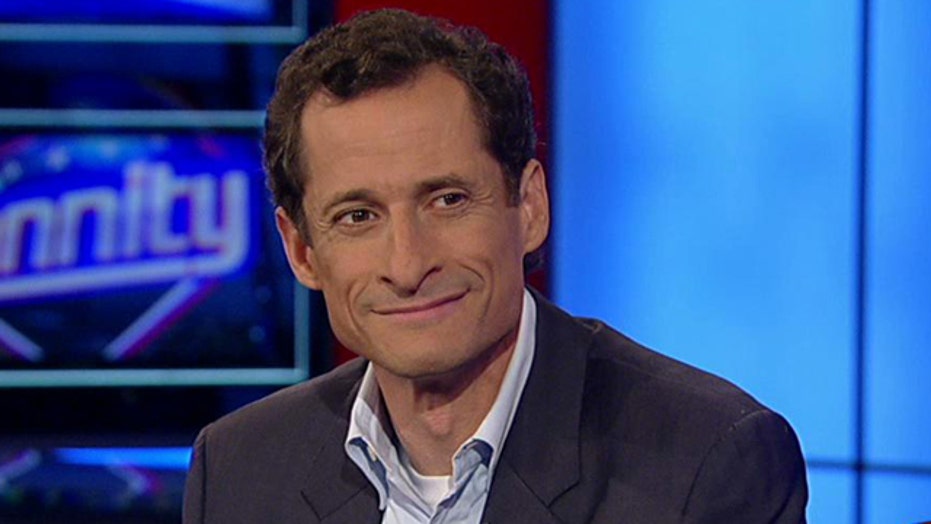 This is a rush transcript from "Hannity," October 9, 2013. This copy may not be in its final form and may be updated.

SEAN HANNITY, HOST: It's been a while since my next guest and I have sat down for an interview. Former Congressman Anthony Weiner resigned from office back in 2011 amid a scandal. Two years later he's back with me in studio. How are you?

HANNITY: I don't know about that.

I may surprise you. I don't take any glee in people having personal issues, trauma. I really wish you the best though we don't agree on anything.

You remember when Hugh Grant had his issue and went on Jay Leno? Do you remember that interview?

HANNITY: He said, "What the hell were you thinking?"

So my first question to you is you went through this difficulty, resigned from office, and then you do it again. I'm like, what the hell are you thinking?

HANNITY: Just from a personal standpoint, did you learn something? Are you changing?

WEINER: Look, I went through a long campaign where I let citizens who wanted to ask me about this ask me. I found frankly they wanted to talk a lot about health care, the condition of jobs in the city, wanted to talk about their lives. I think, frankly, a lot of us, sometimes TV hosts are like this, politicians are like this. They think this is all about us. It's really about their lives. I think people who watch your show are concerned what's going to happen with their lives and the challenges facing the middle class and those struggling to make it. That's what I'm focused on. That's what I care about.

HANNITY: Do you think it's hard now to make -- obviously you don't do well in the mayoral race. Do you think people are unforgiving? You got a very low percentage of the vote.

WEINER: I don't know, you guys don't stop begging me to come on. So apparently you want to talk to me.

HANNITY: I didn't beg you. We asked you to come on. And by the way, I was kind of surprised you said yes.

WEINER: Well you asked me about 50 times.

HANNITY: We always ask. We ask everybody. I have asked President Obama 1,000 times.

HANNITY: Everybody knows you have been through this big thing. You have never been on with me in two years. Here's my question. I have a question --

HANNITY: I thought maybe the reason you're here is because maybe you wanted to transition to television and maybe you're coming on in hopes of replacing Chris Matthews.

HANNITY: You don't want to -- what would you like to do in the future?

WEINER: I don't know. I'm not here as part of a divine plan. You asked me to come on. You said you wanted to talk about ObamaCare and the government standoff. I'd be glad to talk about it. Frankly, it seems sometimes you need explaining on things, so I'm here to do it for you, brother.

HANNITY: You're here to help me out?

WEINER: That's why I'm here to do.

HANNITY: It's not a fair question to ask you if you have any plans for the future?

WEINER: Have I said your questions are unfair?

HANNITY: No. But I'm trying -- Anthony, you're very defensive.

WEINER: You want to have a conversation about me. I'm here to talk about stuff going on in the news.

HANNITY: You're a public figure. You've just been through a big scandal, and whether you like it or not, it's a big issue.

HANNITY: I asked a question simple question. You're defensive.

WEINER: Defensive? You asked a question. I answered.

HANNITY: What are your plans -- what do you think you would like to do?

WEINER: I don't know. It's only been a month since the election. It was a grueling election. I'm getting back in touch with seeing my son every day again. We're not going to subway stops and things like that. And I'm concerned about the middle class struggling to make it in my city and this country. So I will find something. You shouldn't worry about it.

HANNITY: One last question and I will move on to health care.

HANNITY: One last question. Sydney Leathers was on this program and she said of all the conservatives in the country you hated me the most. Is that true? I thought we always got along.

WEINER: Hate you? Do I hate you?

HANNITY: Dislike me the most.

WEINER: That I hate you? I'm here on your show.

WEINER: By the way, I went on your radio shows, on the television show.

WEINER: Frankly, I was part of a group in Washington, the Democrat among progressives, who didn't think it was heresy to come on Fox because I thought that even sometimes it seemed like one hand clapping, I wanted to be there to do the best I could. So I'm here because you invited me.

HANNITY: Let me ask you about health care and the government shutdown and the debt ceiling.

I could play a montage of every Democrat on the debt ceiling saying they weren't going to raise it, including Barack Obama. Now they claim it would be almost immoral not to raise it. Is that hypocrisy?

WEINER: I think you should raise the debt ceiling. These are bills incurred by the Congress. Boehner believes that, the president believes it, I believe that, you believe that. So what's the argument?

HANNITY: The argument is when Bush wanted to raise it all the Democrats said they wouldn't do it, including Obama.

WEINER: I think it's fair to say that people play politics with the debt limit. But no one does what this is, which is playing not only politics but playing a game of standoff with the economy. That's a mistake. What I don't understand, maybe you can explain to me. Boehner thinks we should raise the debt limit, which he says, the president thinks it, Hannity and Weiner both think it. Why don't they do it?

HANNITY: I'm not sure if Hannity actually believes. I'll tell you what --

WEINER: Well, Hannity's bosses believe it. People who care about the stock price of this company, people with 401(k)s who are watching this program --

HANNITY: I don't know what my bosses believe. I haven't asked them about it. I speak for myself on this program. And I would only tell you that I'm really afraid when we have $90 trillion in unfunded liability and we have $17 trillion in debt and Obama will double it by the end of his second term from every president before him.

WEINER: The debts have been run up already. It's like you have a credit card and say I don't like what I bought and I won't pay for it.

WEINER: You don't want to raise the debt limit, is that your position?

WEINER: It's a simple question.

HANNITY: I'm the host. You're the guest.

WEINER: I get to do questions. What am I, a potted plant?

HANNITY: If you let me finish, I will tell you. I'm worried that your kids and my kids, that this is unsustainable, $90 trillion, $17 trillion, I don't think we can ever pay this back.

WEINER: So change the policies. But that doesn't mean you don't pay the debt you already incurred. Do you think we should raise the debt limit?

HANNITY: First of all --

WEINER: You talk to the mothership at the Republican Party. What do you believe? I'm curous. You're a smart guy.

WEINER: Whatever, registered conservative. You speak to the mother ship of that party.

HANNITY: A lot of those mothership people don't like me.

WEINER: Why are you defensive?

HANNITY: I'm not defensive. I'm enjoying this, actually. You're cracking me up.

WEINER: Do you believe we should pay the debt limit and pay our bills?

HANNITY: I think we have to in the end.

WEINER: Of course. Everyone agrees.

WEINER: The only reason it doesn't happen is why?

HANNITY: Can I give you an explanation?

WEINER: You need help? Where are you looking?

HANNITY: There's nobody here for help. This is an empty studio. I'm looking at the camera man.

WEINER: What are you looking?

HANNITY: What I'm saying, is if we are worried about the debt we're putting on our children and grandchildren, Anthony, then the answer is simple. You have to have with it --

HANNITY: I think it has to be connected to it.

HANNITY: I don't think the president --

HANNITY: -- who's nearly doubled the debt of every other president, has any desire to do that.

WEINER: First of all, I don't think there is any disagreement about connecting the things. In the past there have been things connected to -- why not? The question is do you hold the raising of the debt limit and the entire economy hostage unless you get everything you want?

WEINER: Can I ask -- right now, apparently someone is holding someone hostage here.

WEINER: Raise the debt limit. You have yet to answer me why it hasn't happened.

HANNITY: Because the president said he won't negotiate.

WEINER: The president won't negotiate on what?

HANNITY: He's the only one holding anybody hostage.

WEINER: You said you wanted it. So why is that (INAUDIBLE) to the president?

HANNITY: I said, if we get spending under control with it. I think you cannot just raise the debt ceiling.

HANNITY: -- and write a blank check.

WEINER: You said there should be something with it. The president doesn't dispute that.

WEINER: Why do you always have patsies on? Why is it you don't want to have someone who pushes you on a little bit on the basic assumptions of your argument?

HANNITY: You want a job at MSNBC, I got it. Now I know why you came here today.

WEINER: Fox apparently has much lower standards. I'd much rather have a job on FOX.

HANNITY: Ooh, ouch. Want to talk about low standards? Do you want to go there?

WEINER: Go wherever you want. I'm here for an interview. Where do you keep looking? Who's over there?

HANNITY: There is a camera over there that I'm turning to.

WEINER: It's a theatrical thing. You look over here as if you are exasperated.