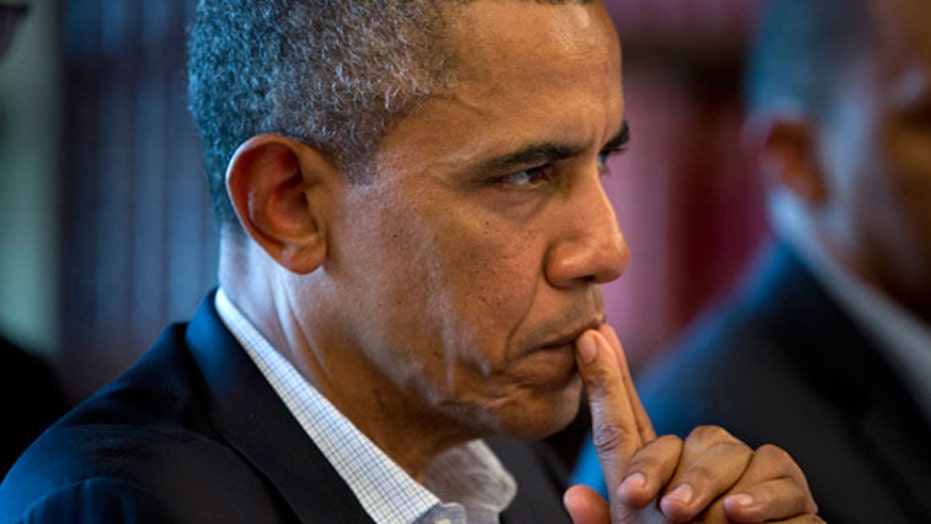 Does the commander in chief listen 'very carefully' to advice he gets from his generals?

This is a rush transcript from "The Kelly File," September 19, 2014. This copy may not be in its final form and may be updated.

In the last couple of weeks, President Obama has spelled out his initial strategy for taking on the terror army known as ISIS. A plan involving what he calls a broad coalition of countries, a series of U.S. air strikes and support for fighters in both Iraq and Syria who are supposed to battle the terrorists on the ground.

But what is getting the most attention is what the plan does not involve -- a growing chorus of top military leaders asking why this president is ruling out the option of using American troops in combat. We are seeing headlines like the Washington Times report on how a former commander says, "Nixing U.S. ground troops damages the international coalition." The Daily Beast asking, "Can Obama keep his generals in check in the war against ISIS?" The final times writes quote, "Obama's isolation deepens over ISIS as it reports on the split with his generals." While the Pittsburgh Post- Gazette says, quote, "White House military divided on use of troops against Islamic State. A headline in The Washington Post, reads, "In military, skepticism of Obama's plan." And you heard that right here on the program last night.

Press Secretary Josh Earnest was asked about that last one this morning. And listen to his response.

JOSH EARNEST, WHITE HOUSE PRESS SECRETARY: The president listens very carefully to the advice that he gets from his military commanders.

JOE SCARBOROUGH, CO-HOST, "MORNING JOE"/MSNBC: -- What do you make of the Washington Post headline when it says in the military, there's skepticism of the president's plan.

EARNEST: The headline's wrong. All they do is they misinterpret Chairman Dempsey's testimony. And the rest of the time they essentially they quote people who are either frequent critics of the president or people who supported the previous Iraq conflict. So the more accurate headline would be supporters of the Bush war in Iraq criticize President Obama's strategy.

KELLY: Mr. Earnest said the president listens very carefully to his military advisors but considered one point shared with us by retired Four-Star General Jack Keane on Thursday night.

In 2009, President Obama rejected a recommendation for a 40,000 strong force in Afghanistan opting instead to set a withdrawal timetable over the next few years and the surge was much lower than the generals wanted.

In 2010 he rejected a plan from Four-Star General David Petraeus to extend the surge in that same country.

Just a year later he was offering a force of just 10,000 soldiers to the Iraqis instead of the recommended 24,000 from advisors. This is the critical troop -- group of troops that was going to be left behind to fight ISIS and the growing terror in Iraq that the president decided to leave no one.

And in just the last year he rejected yet another recommendation for residual forces in Afghanistan. He had opposed any combat role for American soldiers in this terror war in Iraq, either now or in the future despite advice again to the contrary.

Joining me again General Jack Keane, chairman of the Institute for the Study of War, former vice-chief-of-staff of the Army and a Fox News military analyst. General, good to see you again tonight.

I want to get to Afghanistan because that's something that's being forgotten here. Marc Thiessen has been putting it, if you like what happened in Iraq you're going to love what's about to happen in Afghanistan. But right now we got a hands full dealing with the mess in Iraq and Syria. And the question I have for you is whether you believe right now if he had listened, you know, because the White House says he's listening. He's just making his own independent decisions. If he had listened and acted as he was advised to do, do you believe we'd be in the mess we're in right now?

GENERAL JACK KEANE (RET-U.S. ARMY), FORMER ARMY VICE CHIEF OF STAFF:  No, I don't. In Afghanistan and also in Iraq. I mean, the fact of the matter is the initial recommendation from McChrystal and Petraeus, they put three options on the table for a force level in Afghanistan. This was the right decision the president was making to escalate the war. And make a decision about that. But then the pattern began then in 2009 that we have seen for the succeeding five years and that is simply this -- not to give them the resources. They recommended 80,000 no-risk, 60,000 troops some risk, 40,000 minimum risk, essential no less force.

He gave them 25 percent less 30,000. What did that do? And he was told this, it would protract the war, drive up the casualties. That is exactly what happened as a result of that. And then he pulled that force out after 11 or so months. We were never able to, Megyn, put it in the east. We had success in the south. We were never able to put the force in the east. The Haqqani Network lives today, it's vibrant today in the eastern mountains. We were never able to root it out like we did with the Taliban south and we're going to turn that country over with that state of security affairs. When we left Iraq it was stable.  When we leave Afghanistan, it's in trouble.

KELLY: He really seems to think that he knows better. I mean, he ran for office promising to end those two wars. And then he got into office and got all sorts of access to information he didn't have prior. But it didn't change his views on it. He stuck to his guns about getting us out of there really no matter what the cost. And you hear even today his White House press secretary saying people like you who have been critical of his decisions, well, that's just because you happen to support the war in Iraq and so, you know, you got an agenda.

KEANE: Well, I disagreed with Bush's strategy in Iraq. And I think I made some contribution to help him turn it around. So I was a critic of the administration for some time.

You know, what is really at the heart of this -- I think Secretary Gates had it right. I reviewed his book for The Wall Street Journal and I was struck by one of his comments. And I can only paraphrase it here now, but he said there's a fundamental -- on the part of the president, a fundamental mistrust of the military which leads to very poor decisions on his part.

You know, the military needs oversight, Megyn, like anybody does. We deserve to have our options challenged and vetted and pushed to be sure.  But at the end of the day, they don't -- the military doesn't have an agenda. It's just presenting options to try to succeed. Its judgment may be off at times to be sure, but the fact of the matter, they're well- intentioned judgments that are being presented.

So you have different presidents who did challenge the military but also supported it with the resources they asked. This is Ronald Reagan, this is George Bush -- George H.W. Bush in Gulf War one and this is post-9/11 George Bush also.

And now we have a president that every single time -- and one we didn't mention there is 2012 when Panetta, Clinton and Petraeus recommended to arm and equip the free Syrian army, which initially had momentum in Syria, and then the Russians and the Iranians loaded in there with all of their equipment and troops and arrested it.  And as a result of that the momentum shifted, the Syrian army reached out for help and we said no and now we're in a dire situation in Syria.

The pattern is he does not trust that judgment. He limits every single time an option -- a serious option that's presented to him. I've never ever seen a pattern like that. I've never seen that kind of mistrust except when Lincoln did not trust his generals in the beginning part of the civil war mainly because they were incompetent. And that is surely not the problem here.

KELLY: So what is going to happen now? Because what the president's critics say is he's basically its war based on Pew research. You know, the polling that shows him, OK, the American people want to do something about ISIS, but they don't want boots on the ground, what else the Pew say, oh it says it's OK, so I'll do this, I'll do this. That's what his critics say he's doing.

So we're about to go over there with an air campaign that has not yet begun and no ground troops, you know, no combat troops in no combat mission, which is what you and other generals believe we need to keep the door open for and there should be forward operating Special Forces there.  In any event, what's going to happen? Because General Mattis was saying, the retired general just spoke out on this on Thursday and said, this is not the time for show of impotence in the Middle East by America.

KEANE: Yes. I mean, that's absolutely right. I mean, I have the greatest respect for Jim Mattis, a great soldier, a tough combat commander and very smart guy. I mean, the fact of the matter is here's what I do believe will happen. We're going to struggle with this coalition. Why?  Because in all previous coalitions, U.S. combat capability, troops, air power, has been the centerpiece of the coalition that everybody gathers around America which is the centerpiece of it. That's not happening here.  We're advertising to everybody that we're standing off, we're providing air power but we don't want troops on the ground.

KELLY: So, we want them to do it, but we won't do. Usually, we do it and we lead, we're saying we're not going to lead it but we want you to do it.

KEANE: And that's not going to happen. You know, that will not happen Megyn, they're not going to provide troops on the ground. They are so skittish about what's happening here because they all have radical Islamic movements inside their countries themselves. They are very concerned that the president pulling out of Iraq, not executing the air strikes as a result of the chemical weapons red line being crossed, will not see this through. They watch him. They understand what you and I just spoke about and that litany of rejection of military proposals. They know full well that he may not be serious here despite the rhetoric. So they're not going to be all in. They're going to be guarded because they know they'll take risks with their own internal radical Islamic movement once they commit to do this. And if the outcome is not going to be a win, then they're not going to commit. So that's one thing.

But the other thing that's going to happen, Megyn, ISIS will force our hand. I'm absolutely convinced of it. We will put forward air controllers and advisers down there because we will struggle. We will put direct action teams to go kill ISIS because the we can in Iraq is going to struggle and we will have eventually combat ground brigades to deal with the potential failure because if we don't, we're going to lose.