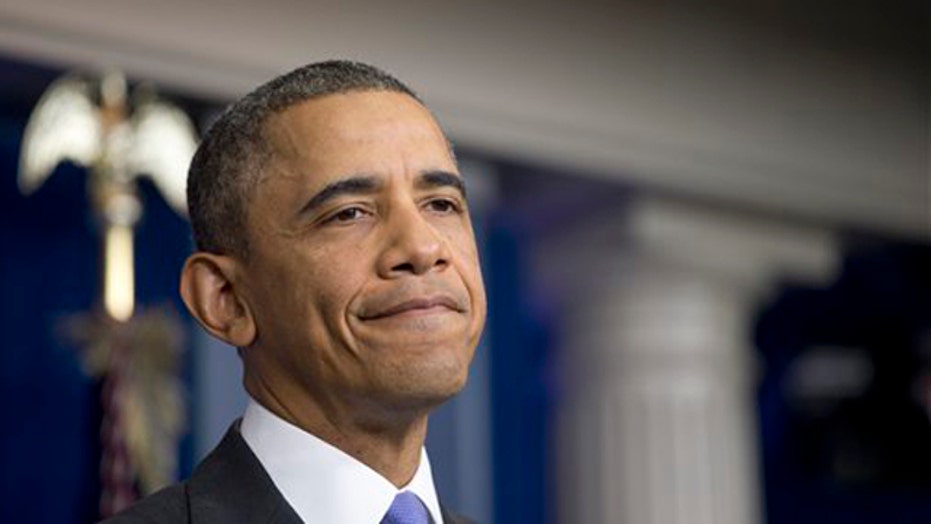 Evolution of the ObamaCare error

This is a rush transcript from "Hannity," November 15, 2013. This copy may not be in its final form and may be updated.

SEAN HANNITY, HOST: We bring in our distinguished studio audience. Good to see you, everybody. Thank you for being there.

HANNITY: ... my good friend, big supporter of the president of the United States of America.

RIVERA: Voted for him twice.

HANNITY: Did he lie -- did he lie to the American people?

RIVERA: I guess you could say that he lied. I only equivocate because maybe he didn't know specifically all the nuts and bolts. But the real lie is what ObamaCare is. And if I could just say briefly what it is, is less about health care, it's more about a new tax. And that's not what was told to the American people. This is a tax on the young and the relatively healthy to help the old and the more infirm. It's a tax from men to women because women have -- young men now have maternity coverage, et cetera. And I think that that part...

By the way, I appreciate -- I appreciate Geraldo's honesty. Do you regret voting for him? Do you feel betrayed?

HANNITY: We do that already. We -- the average American is giving such a large percentage of their income -- let me -- let me throw out a couple of numbers to you. Gallup, 47 percent of Americans now say they cannot trust their president.

Billy Cunningham, a majority of independents think that the president of the United States deliberately lied to them.

BILL CUNNINGHAM, TV & RADIO HOST: He should have said, yesterday, I am not a crook. I am not a crook. That's what he should have done because it was that bad! He lied blatantly because the CFR, the Code of Federal Regulations, and a bunch of government statutes and -- and proclamations said in '10, '11 and '12, there will be millions of Americans who lose their health insurance! He knew it, and he lied to get it passed! And he lied to us!

TAMARA HOLDER, FOX CONTRIBUTOR: (INAUDIBLE) Bill. What is your point?

CUNNINGHAM: My point is he lied!

UNIDENTIFIED MALE: Nobody's got one.

HOLDER: Well, that's funny because if this is -- if you're so free enterprise, why in all of these 22 people that you have, why isn't there one person, Sean, from the insurance companies to talk about it? Because today they said they do not want these policies reissued.

HOLDER: Where is the free market speaking on this panel?

HANNITY: I'll give you what the -- what they actually said because I actually have the quote from them here in my pile of stuff.

HOLDER: But where are they? I don't see them.

HANNITY: No, no,no! The health industry spokespeople actually said that this is a calamity and it's going to cost people higher premiums and it's a disaster!

HOLDER: They also said they do not want to reinstate these insurance policies that were canceled.

HANNITY: Go ahead. From the Heritage Foundation.

ALYENE SENGER, HERITAGE FOUNDATION: It's November 15th! ObamaCare is supposed to take effect January 1st. These people are supposed to get coverage.They've already lost their plans. They've already been canceled. So yes, an insurer who's already priced its plans for 2014 doesn't want to offer -- likely will not, like, want to offer a plan that's priced for 2013. That doesn't make sense. That's not how the insurance market works. And that's what you hear from the National Association of Insurance Commissioners. This is going to be unworkable.

DAVID WEBB, RADIO TALK SHOW HOST: Essentially, what Tamara is asking the insurance companies to do is to be punished for compliance with the law.

CHRIS HAHN, DEMOCRATIC STRATEGIST: But they never had to cancel their plans!

HAHN: None of those plans had to be canceled.

WEBB: Let me finish! They were not in compliance...

HAHN: They were allowed to grandfather those plans in. They decided it was more profitable to offer new plans that complied with the law. That's why the majority of these plans are being turned out. There's a lot of insurers...

WEBB: (INAUDIBLE) Eric Cantor and President Obama in the meeting where they talk about people who would lose their insurance.

WEBB: You know what? America, who are you going to believe, me or your lying eyes?

HANNITY: All right, into 2014. Now, wait a minute! People want to believe their president.

HANNITY: No, they do. I think -- I think the American people do!

HOLDER: You just talked about the numbers going down!

HANNITY: I think -- well, but the point is, now they feel disappointed. There's a political price -- the reason, I argue, Rick Ungar, that the president did this is because the president heard from every Democrat that's scared to death they're going to lose in November, and that's the only reason he gave a little.

UNGAR: Actually, there's some truth to that. It was the Democrats who pushed him to do it before the vote on the bill.

UNGAR: Yes. So that's not that shocking. But you're conflating so many things here. First of all, if the industry came out and said, now it's going to cost everybody a fortune if we reinstate it, that's simply not accurate insurance stuff. It's not at all hard for them to do the calculation.

HANNITY: Who do you think paid for the transition for three years?

UNGAR: Fine. You can price that in. But I got news for you. That was priced into the policies that they're offering on the exchanges, if they went to the exchanges. Some didn't do it at all. But the ones who are going to -- who may decide to re-offer the policies they canceled over the past six weeks, that calculation is done so quickly. You may not like the result. We'll see. But the calculation is not the problem.

GUY BENSON, FOX CONTRIBUTOR: Right. And I think what's important to remember is the context from 2010, when everyone knew this was going to be the case, at least people who were paying attention. And the Republicans in the Senate offered a bill to do exactly what the president is now trying to do at the very last minute. Every single Senate Democrat, Landrieu, Hagan, all these people pretending to be shocked and outraged today, they all voted no.

HANNITY: How many agree the president did this yesterday to preempt the Republicans today for political cover for the Democrats running for office? Show of hands.

WEBB: They have offered many solutions!

SABRINA SCHAEFFER, INDEPENDENT WOMEN'S FORUM: Yes, let's forget about Democrats and their policies. Let's talk about the opportunity that the GOP has now to be real leaders and to do something that would be smart politically and policy-wise for the American people.

HANNITY: A solution. All right.

SCHAEFFER: Yes. The fix is one thing, but this is an opportunity now to move forward with some real market-based reforms, whether we're talking about reforming the tax code or the insurance market. There are things we can do that would help roll back this law. And this is a time for Boehner and others in the leadership to really take, you know, the bull by the horns.

HANNITY: I agree with that. I think that's absolutely -- you're friends with Boehner.

CUNNINGHAM: I talked to him about two weeks ago.

CUNNINGHAM: I knew him before he went to Muller (ph) high school, Cincinnati, the whole deal. John Boehner is going to play this, I think, correctly, and that is, have an alternative by the end of the year in addition to what happened today. Something's going to happen.

But Sean, to talk about this point, most of the American people are under employer plans. You wait until next year. This was a puddle! Next year's a tsunami of over a hundred million Americans! You and I are going to be paying for pap smears, children's dental exams, mental health...

RIVERA: Well, you should.

HANNITY: Coming up next -- they're just getting started.