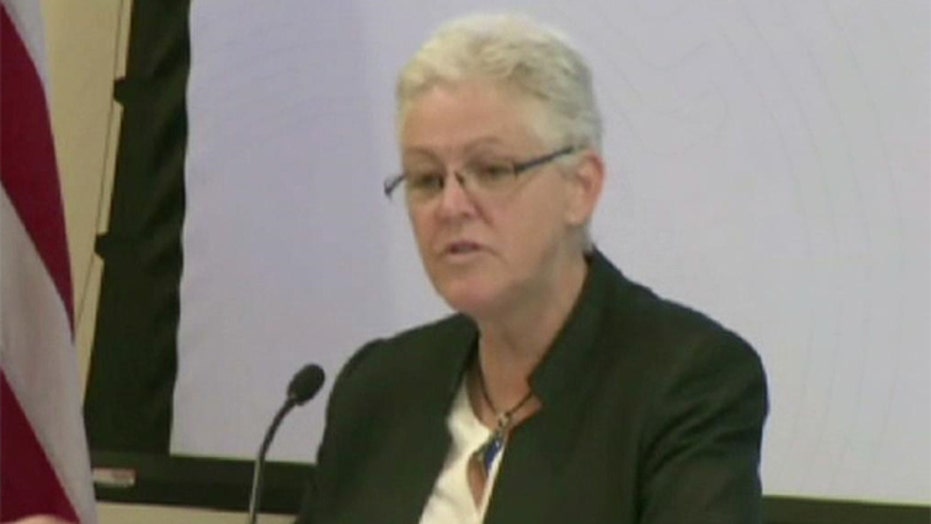 STEVE FORBES: The senator is right. The regulations coming out of the EPA are often not based on real science at all. This has done damage to the energy industry, hurt energy production, hurt the economy and if there is any opportunity out there, entrepreneurs will find it. Big government smothers opportunities, entrepreneurs find and create opportunities.

RICK UNGAR: There is a 10 state organization that runs from Maryland to Maine who have entered into this understanding where they were going to try and cut carbon emissions, which has been going on for the past 10 years, and it turns out that not only did they cut carbon emissions by 25 percent, their economies worked twice as well as every other state that was not a part of this.

RICH KARLGAARD: It's been a great upside surprise, no thanks to the administration on this. This has been entrepreneurs, technologies like horizontal drilling and so forth. Gina McCarthy's degree is in social anthropology with an emphasis on small animals and primitive cultures. She knows nothing about economics, economic growth, science, pollution.

ELIZABETH MACDONALD: He is absurd with this habitual self deception. Trans Canada is building that pipeline to the east and everybody to the east loves it because they see the jobs coming. Under this president, the regulatory workforce has grown 20 percent, we get it that this president loves rules. He will rule by fiat, circumventing congress and the course, that's so bad for job growth, which is flat lining in this country and a record of 28 million part time workers in this country. He wants to swap the successful energy jobs with poor jobs in alternative energy. The Solyndra jobs and wind farm jobs that don't create a lot of jobs.

SABRINA SCHAEFFER: We all want a clean environment but we have to balance that consideration with our real need for energy supply and our real need for economic growth and job creation. Gina McCarthy, who scoffs at her critics, has been at the heart of the President's war on coal which has been 42 percent of our electricity supply. We have to think hard about this woman who relies on junk science, has been criticized by her own agency, allowing her to impose these regulations that will cripple our economy.

ELIZABETH MACDONALD: Why does anyone in congress think that high taxes create middle class jobs? It's not working in California and it seriously doesn't work in Detroit. Taxes are austerity. People in Detroit left because they said to themselves ‘why pay this high tax bill when the environment is not so great here, and job growth is so poor? We don't need to pay higher taxes when we can go elsewhere.

MORGAN BRENNAN: High taxes are a symptom of a larger cause. You are seeing those taxes rise because of bad policies and because you see people and capital leaving areas and you have to make up for that tax base. High taxes alone are not necessarily bad for economic growth. WWII, the 1950s, 1960s, we saw tough income tax tiers up to 91 percent and saw average economic growth of up to 4 percent a year throughout those 2 decades. Taxes are a symptoms but not a cause.

STEVE FORBES: Detroit does have high property tax including machinery and equipment which has destroyed any manufacturing in that state, and it also hurts homesteaders. Homesteaders love to come in cheap areas and rebuild them gentrification but for Detroit, that's bar. The 50s & 60s, after WWII, the US allowed families to split their income tax, reducing that in half. But as the 50s went on, we had 3 recessions in 6 years which is why Kennedy lowers tax rates. Then Johnson comes along and raises them, it raised inflation, Reagan has to rescue the economy.

RICK UNGAR: What you have happening is that you have a city that has reduced to two-thirds since the 1950s. They have a land mass that you can fit Manhattan, Boston and San Francisco into. They have tried to play catch-up. They raised taxes because when you have fewer people, you are trying to find some way to pay the bills. Obviously it didn't work.

JOHN TAMNY: I want to cut taxes anyway we can but it oversimplifies things when you say that high taxes killed Detroit. Minneapolis isn't far from there, it has high tax rates but it is far from home from some of the greatest global brands. What killed Detroit is the fact that its city and its people and its companies are stuck in the 20th century. Poor cities and states cling to manufacturing jobs, rich cities and states design goods while manufacturing them overseas. If Detroit wants to get into the 21st century, it will rise again, cutting taxes will help but it has to get with the present.

ZACK O'MALLEY GREENBURG: $40 billion is a pretty outrageous amount of money, if you think about the entire music industry, you could probably buy the 3 top record companies, and still have enough money to buy the Yankees with half of that amount of money. If he would have lived and gone on this tour, I think he could have made as much as Madonna who earned $125 million last year, Lady Gaga who have earned $80 million.

STEVE FORBES: It's preposterous; it's just lawyers throwing out a figure hoping to get something. They shouldn't get a penny from this, the tour had nothing to do with his behavior and it's one of these sad cases where the man's worth more dead than alive, like Elvis, because now people focus on the music.

SABRINA SCHAEFFER: This sounds so outrageous, but the reality is that this is an entertainer who may be worth more as he ages, or after he dies. He is the number 1 dead celebrity earning more than $200 million; he is trailed behind with Elvis.

RICK UNGAR: its nonsense, the estate isn't going to win this case in the first place; it's a bologna case and even if they did, they wouldn't get nothing in the universe of that. His whole estate is worth $600 million.

MORGAN BRENNAN: Unfortunately this is an influential artist that is worth more dead than alive. And his publishing catalog is what's going to be the most lucrative.