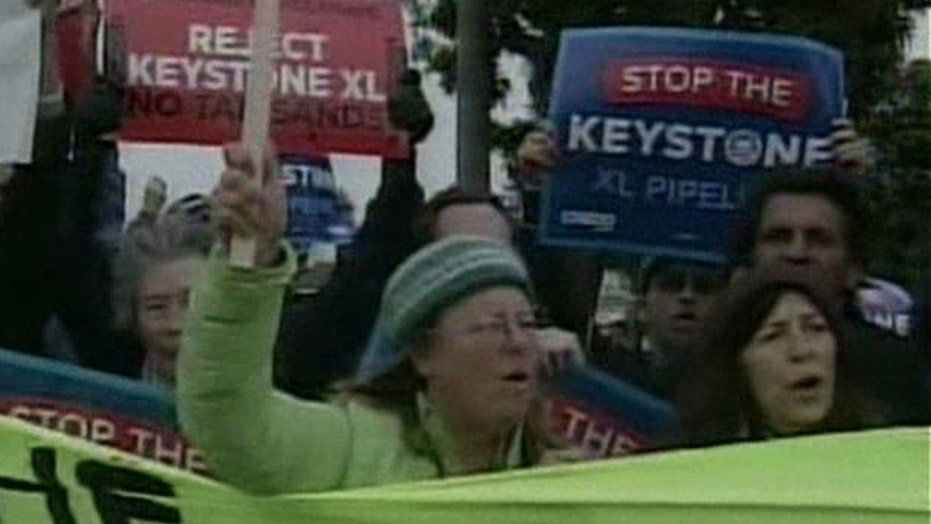 STEVE FORBES: This is ridiculous it should have been done 3-4 years ago. The objections are emotional and have nothing to do with reality. These extremists would rather us go in caves and freeze except for themselves. This thing should go forward, it will provide jobs it will mean more gas, it will mean more oil in particular. More is better because cheaper energy not only means jobs in the energy sector but also jobs in the rest of the economy.

RICK UNGAR: I don't have an instant allergic reaction to the pipeline. My attitude is if they people who are dependent on the aquifer where this is going to be built, if they are ok with it I'm ok with it. On the job front, it is going to create about 20,000 jobs, I'll take any job, but unfortunately those jobs are going to last for a short time because once it's built, those jobs go away. Let's lose the argument on gas prices; it's not going to have an impact.

ELIZABETH MACDONALD: You noted in the break the better multiplier effect will create things like restaurant jobs, other service industry jobs. That's better than what the government uses as a multiplier effect when it does its spending. I love how the same guys on the president's job council, which the president has listened to for job creation, are now telling the president, including David Cote from Honeywell, listen you have no energy strategy, approve the pipeline without delay. I like how there was zero reaction from the environmentalists from that big railway spill in Minnesota because that's what is going to happen. You are going to have to deliver the oil by railway which is way more polluting than the pipeline.

JOHN TAMNY: I don't think it is, I think a lot of this is money illusion and a lot of those jobs are not economic if we ever return to a small dollar. But as it goes for Keystone, if market forces want to build it, let's go with it. Let's also curb our enthusiasm. The price of oil is priced in the global markets. The notion that a pipeline built in North America is going to change gasoline prices is pure fantasy. You only get cheap gasoline if we go back to a strong dollar and there is no evidence we are going to do that.

MIKE OZANIAN: They way you get sustainable jobs is through private investment, private capital, and that's why I like the Keystone Pipeline. Its private market dollars not government dollars and that's how you create job growth in the long term it's not because of government creating temporary jobs. I'm bullish on this on what it could do long term for jobs in this country. Our country is awash in cash but businesses haven't been investing because they have been stymied by the government. That's why I think this would be a big positive.

RICH KARLGAARD: In Williston North Dakota, they are paying $20 per hour at a McDonalds franchise to compete with oil field labor. The Keystone Pipeline, Rick Ungar cited 20,000 jobs, and that's correct but the spinoff factor is more like a 10x factor of 200,000 jobs, numerous groups have studied this. The thing is about jobs, we have a tragedy in the United States that skilled high school graduates really have the highest unemployment figures and that's where we need these jobs. If you live on the coast and you have 800 math SATs you're fine, but we need jobs for these kinds of people.

RICH KARLGAARD: This was more about trying to hold his basketball players to high standards which are audible but this is just outright cruelty. You don't kick people, you don't slap them on the head, and you don't label them with gay slurs. You know what I really like about this? There is a silver lining here that is Rutgers wasn't any good. They were a 500 basketball team. When you look at all the great coaches in history, John Wooden at UCLA, Bill Walsh the football coach, Phil Jackson the basketball coach, these were honorable men who treated their players with respect. Not only was it unconscionable behavior it's not even effective.

KAI FALKENBERG: In the private sector, there is no shortage of mean bosses that verbally abuse their employees without getting fired. How about Steve Jobs? He was notorious for humiliating his employees and that didn't get him fired from Apple. It was been well-documented on many occasions. The difference in the Rutgers case is that it was caught on video and the coach was a poor performer, he had a losing record.

ELIZABETH MACDONALD: I don't think you guys mean that Lombardi, or Jobs was at any level at what this guy was doing. He was so deeply disturbing on his assault on his players, his anti-gay slurs, so pathetic. If you did that to your child, the state would come and take your child away. Even Rice himself was critical of his own behavior. He said it was no excuse like Christie and Lebron James. He did have a losing record, it was 55-41 losses. The school sat on this for months; the parents must be upset about it.

JOHN TAMNY: I think we somewhat need to relax here. The male sports culture is often like this. Coahes berate, they grab facemasks, it's the way it has always been. I'm not defending Coach Rice, I'm kind of embarrassed for him, but this is hardly abnormal and the difference is in the past, they didn't have cameras following coaches like this. Jack Welch was notorious for berating his employees but he got good results. This coach didn't, fire him for that more than anything.

STEVE FORBES: All you do is invite a lawsuit, especially in this age. In terms of Steve Jobs, he got fired, remember because of his impossible behavior. Even though he had a prickly personality to put it mildly, he had to learn to bring people together; he had to learn to become an effective coach.

BILL BALDWIN: I don't think a bad boss is necessarily fired in the faster in the private sector. In the private sector there is a calculation made. If there is an accusation of abuse or harassment, and the offender happens to be a great performer, they send them to sensitivity training. If he is a clunker, they have a great excuse to get rid of him.

BILL BALDWIN: The first law of economics is that you have to give incentives matter and I really think we have to give the beneficiaries of disaster assistance programs an incentives to A be frugal, and B, stay out of harm's way. Part of that plan would be vouchers; another part would be paying them to live somewhere else,.

MIKE OZANIAN: What type incentive are you going to give them? Have them move out to Kansas where they are going to get hit by a tornado? I'm not really sure about this. I don't think the government should be involved with reimbursing people for personal property when it's not the governments fault. It's always inefficient, you go back to Katrina that was ac complete debacle, Sandy was another debacle; keep the government out of it.

MORGAN BRENNAN: No, there are reasons why in theory that the government

proposing to relocate people in New York & New Jerseys both have these proposals in place makes sense but in reality you need to build the homes, first we have inventories at record lows right now, where are you going to move those people? Secondly, we have a lot of homeowners are under water on mortgages and won't be able to afford to move, so rebuild those homes.

RICK UNGAR: I have to say something to Mike's point. Sandy is not a debacle and in fact it's worth noting that the current administration has done a much better job to put checks in to make sure we don't see happen what happened with the last administration.

STEVE FORBES: Give them vouchers and let them make their own decisions.

Make it clear in the future, no more flood insurance. If you move in a bad area you pay the insurance like everyone else does.