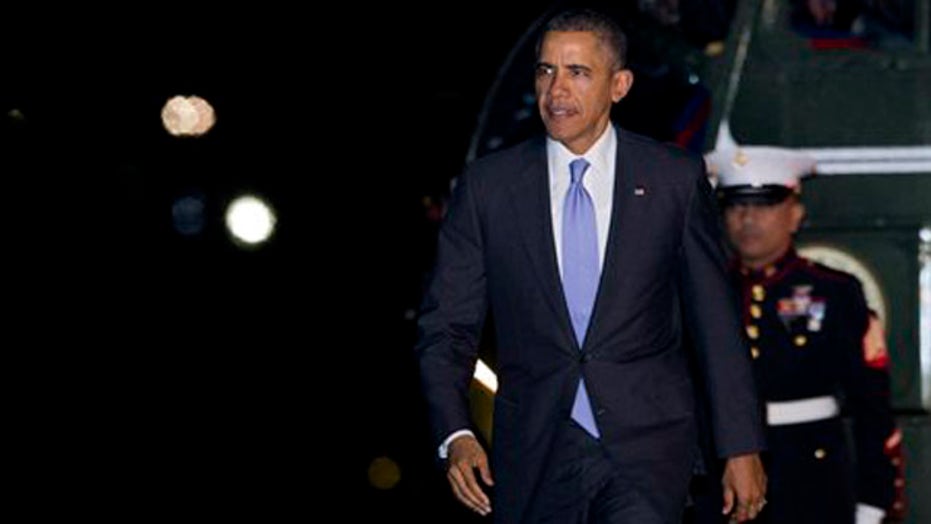 This is a rush transcript from "Hannity," March 21, 2014. This copy may not be in its final form and may be updated.

SEAN HANNITY, HOST: Another embarrassing week for President Obama on the world stage. While Vladimir Putin is busy making a laughing stock out of him, and while the incompetent Malaysian government can't seem to find a missing plane the size of a football field, well, this is what your commander-in-chief has been focusing on, real important stuff.

ZACH GALIFIANAKIS, COMEDIAN: It must kind of stink though that you can't run three times.

PRESIDENT BARACK OBAMA: Actually, I think it is a good idea. If I ran a third time it would seem like a third "Hangover" movie. I didn't really work out very well, did it?

OBAMA: I've been unfairly maligned about my jeans.

OBAMA: The truth is generally I look very sharp in jeans.

OBAMA: My pick, Michigan State, bring it home for me. It has been a while since I won my pool.

OBAMA: I heard about that. I thought it was a pretty cheap stunt, myself.

OBAMA: I'm picking Connecticut to play Notre Dame, who gets their first loss of the season. I think this time Connecticut is going to get them.

HANNITY: Of course, he had to get both the men's and women's bracket picks in. Plus his wife, Michelle, she is now playing ping pong on a taxpayer funded vacation in China right now.

Gavin, thoughts? Why do I think getting embarrassed on the world stage, the president picking brackets, Putin mocking him and making fun of him, humiliating him, and of course we have a bad economy, that all of this added up is a horrible visual for the American people?

GAVIN MCINNES, "THE DEATH OF COOL" AUTHOR: It is a horrible visual for you because you're not his demographic. But you know who elected this guy? Women, young people, minorities, they love this stuff. These are his people. Zach Galifianakis was the young people vote. Ellen was the woman vote. This is his demo. If we had the same voting demographics we had in say 1979, he wouldn't have won. He is just appealing to people who got him in office.

HANNITY: Tamara's about to have --

TAMARA HOLDER, FOX NEWS CONTRIBUTOR: I'm having a stroke right now. I can't believe you're saying these are his people, minorities, woman and young people.

HOLDER: These are American people that the Republicans like yourself the conservatives, are leaving out.

HOLDER: Big difference -- non- Democrat, non-Democrat are leaving out. And you are not going to get those voters. Who are they going to vote for?

HANNITY: Let me go to Peter, the voice of reason. Good thing we put him in the middle.

PETER JOHNSON JR., FOX NEWS LEGAL ANALYST: The president is going to open at the Sands for the next 10 weeks. He's going to be doing ventriloquism next, and then he's going to do his plate spinning, and then we'll have him out with big trains and dogs and things.

It is ridiculous, Sean. You're absolutely right. Is this the image of our president whether he is wearing mom jeans or picking up the bracket or with Zach Galifianakis and they're being cute with each other and demeaning the presidency, and nobody can get a job, and people are afraid of the stock market and Crimea and Russia in the dumper?

HANNITY: Liberals were mad at me when I said, "For the first time in my adult life," obviously a play on Michelle Obama's words, "I am humiliated for my country," because we're being embarrassed on the world stage, 50 million Americans on food stamps, 50 million Americans in poverty, 92 million Americans not participating in the labor force. And Michelle is going on a junket that we're paying for to China, the same China that supported Russia's takeover of Crimea?

HOLDER: Can I agree with you on this, and Peter. This is called --

HOLDER: Let me ask you a trivia question. Do you know what the name of the trip is called? The gentle diplomacy trip, which is Obama speak for taxpayers are paying for my family vacation. The thing is, are you listening?

HOLDER: And it's $84,000 night at presidential suite at the Westin. Princess Diana was feeding the poor, and feeding sick children with AIDS, and the family's, like, flying around --

HANNITY: I am thinking here.

MCINNES: The problem is that we're thinking of Obama --

HANNITY: You didn't want her to vote you told me on my radio show.

HOLDER: You are such a misogynist.

HANNITY: Let's go back to Peter. I need a voice of reason.

JOHNSON: But he's not exemplifying the real single moms in this country.

MCINNES: I think he's personifying them.

JOHNSON: Is he? I don't think so. Maybe sitcom single moms, but not the real single moms that are out there working to take care of their families.

HOLDER: I pulled up his five clear goals -- the president's plan -- when he was running for office for the middle class. It was creating jobs and blah, blah, blah. None of this is what he's doing for America.