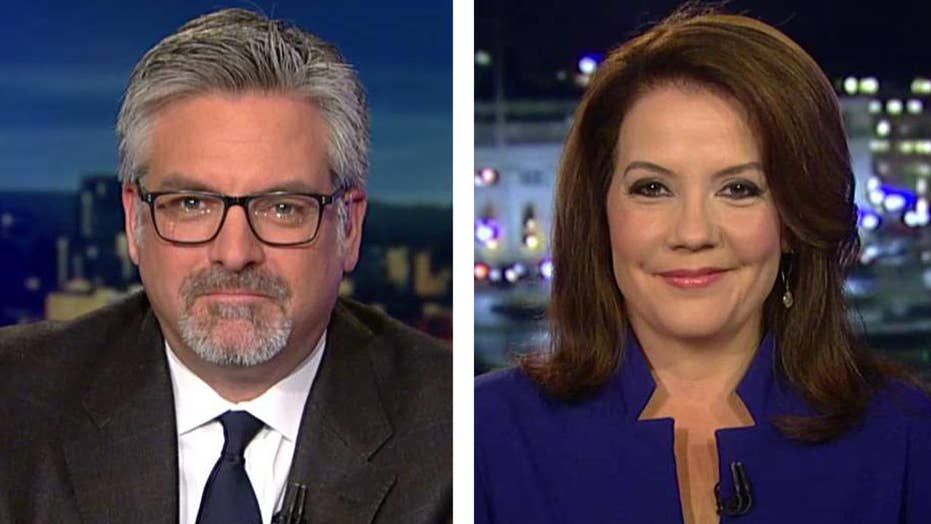 This is a rush transcript from "Special Report," December 21, 2017. This copy may not be in its final form and may be updated.

BRET BAIER: This is a Fox News alert. You are looking live at the Senate floor
there. This is the final vote coming up in the Senate on a stopgap
government funding bill. As we mentioned, the House passed that measure
earlier today. The Senate first had a procedural vote just moments ago.
Now we are waiting on this final vote. Spending $81 billion on disaster
relief, the senators decided they are going to wait until after the first
of the year to deal with that. So now you're talking about the government
funding. This is the shutdown voted everybody has waited for. They have
to get to 60 votes in order to get it through. The House, as we mentioned
earlier today, did its job on that front.

UNIDENTIFIED LAWMAKER: One thing that they are supposed to do is to keep this
government running, to keep the lights on.

SARAH SANDERS, WHITE HOUSE PRESS SECRETARY: Look, we have maintained our position all along, we
want a clean bill, and that is what we hope happens and we hope it happened
soon.

CHARLES SCHUMER, D-N.Y. SENATE MINORITY LEADER: The hard right has such a
pull on the Republican Party that any form of compromise that does things
in the middle splits their party.

NANCY PELOSI, D-CALIF., HOUSE MINORITY LEADER: News break -- the Republicans
control the Congress. They control the House, they control the Senate, and
they have the signature in the White House. And they don't need us to keep
government open.

UNIDENTIFIED LAWMAKER: On this vote the yeas are 231, the nays are 188. The
motion is adopted. Without objection, the motion to reconsider is laid on
the table.

BAIER: Again, the House passing it. The president weighing in today on
twitter as he often does, "House Democrats want a shutdown for the holidays
in order to distract from the popular just passed tax cuts. House
Republicans, don't let this happen. Past the CR today and keep our
government open." They did just that.

Let's bring in our panel. Steve Hayes, editor in chief of The Weekly
Standard, A.B. Stoddard, associate editor at "Real Clear Politics" and
host of "No Labels" Radio on Sirius XM, and Mollie Hemingway, senior editor
at "The Federalist." If we have this vote we are going to break into the
panel and get our tally as it goes along here.

Steve, your thoughts on this end of year push as we often see a fiscal
cliff?

STEVE HAYES, EDITOR IN CHIEF, THE WEEKLY STANDARD: It's interesting to
watch Republicans during this debate about the government shutdown because
they have really stuck together despite the fact that there have been some
pretty serious internal differences among Republicans in the House on
levels of defense spending, what have you. But they have stuck together,
and every time Republicans stick together in an environment like this it
diminishes the leverage the Democrats have. This gets them through to the
next one of these next month.

A.B. STODDARD, ASSOCIATE EDITOR, REAL CLEAR POLITICS: January is looking
like a real problem. Somehow they managed to put off not only dealing with
these tough decisions on spending, but whatever deal they have made to get
through this deadline involved dealing with disaster relief later and
dealing, most importantly, with immigration, which is a really contentious
issue. A lot of people have been assured that this is going to be, that
there's a bipartisan coalition at work on this right now, and this is going
to be dealt with in January. I think that's where you're going to see a
lot of threats from proponents of fixing some kind of legalization for the
DREAMers before that January 19th deadline for the next spending. That
comes before the State of the Union address. It can be a very tough time
for Republicans.

BAIER: On the spending for the disaster relief, one key figure is Puerto
Rico governor Rossello, and he was up on the Hill waiting for this to see
if it was going to happen. Again, what they said the Senate is punting
until January. He says, that's OK, we are expecting a better bill, meaning
probably more money, Puerto Rico and other disasters rolled in there.
Mollie, it does look like January is going to be quite something.

MOLLIE HEMINGWAY, THE FEDERALIST: Right. And one of the things that is
interesting about a shutdown is that Republicans have previously shut down
over concerns about the budget or Obamacare, other things that they thought
were very serious. They believe they took a political hit for that so
they're not inclined to shut down the government. Democrats being the
party of government are not inclined to shut down the government even
though they claim they might do it over legalization or amnesty for people
who have come here illegally. So there's not really much of a caucus on
the Hill for people who want fiscal restraint.

One of the largest complaints about this tax bill, it's very good for
corporations, it's very good for jump-starting the economy, but is it
enough to offset some of these spending problems that we have? There are
people fighting for that, except for maybe Rand Paul who said he does not
want to see people busting through spending caps, and he pointed out that
busting through spending caps has increased our deficit by $6 trillion
which is something that Congress has done 29 times. It just does not seem
like there is much of a desire to pull in spending, and unfortunately I am
not sure if there is public desire for that either.

BAIER: It's such a turnabout from where we were election cycle, two cycles
ago when a lot of the campaigning happened in front of the national debt
clock.

Steve you had an interview with the House Speaker, Paul Ryan, in which --
to "The Weekly Standard," in which at the end of the day he says we have
got to go after the root cause, health care inflation and entitlements.
Welfare reform is going to be our next lift. We're never going to give up
on entitlement reform and the things we need to do to get the debt under
control. With one more reconciliation I think we have a pretty good shot
at getting some of these things done."

But the Senate majority leader telling Axios today "I think the Democrats
are not going to be interested in entitlement reform, so I would not expect
to see that on the agenda." That is a bit of a different message from two
sides of the capital.

HAYES: Yes, it is a pretty extraordinary difference. Paul Ryan has made
no secret going into my interview that he wanted to address welfare reform,
that he was always going to return to entitlement reform, that he wanted to
get back even to health care reform. And Mitch McConnell came out today
and dropped a nuke on Paul Ryan's plans. Ryan said these are the top
priorities of his 2018 agenda. Mitch McConnell in effect said, not going
to do that, that is not on my agenda at all.

And he went even further. He said he wants -- this is Mitch McConnell said
he wants to work with Democrats on an infrastructure bill. We heard the
president talk about $1 trillion infrastructure bill. There's not much
enthusiasm, I can tell you, in the House conservatives for a big
infrastructure bill, particularly one that is defended in Keynesian terms
that Donald Trump has been defending. I think Mollie is right about
spending restraint, but of course the real spending restraint that really
matters long term is entitlements, and with that reform, that is going to
continue to grow exponentially.

BAIER: And A.B., there is another side to this, and that is the ObamaCare
question, again, the Senate majority leader saying today that there is not
going to be an immediate effort for another repeal and replace. Lindsey
Graham saying, you bet we are going back at it without the mandate
ObamaCare is going to take some hits pretty quickly.

STODDARD: This is really a rip that they took repealing the mandate
because that is what gets more people who are healthier into these
marketplaces and makes them more, keeps them more competitive. The people
in the pool are going to be sicker and older, the cost for the coverage is
going to be more expensive.

And so you heard President Trump say we are going to replace it later was
something that is going to be much better. This is the last thing that
they want to do, to go back to the drawing board on ObamaCare. It's why
the speaker tried to put it off. But it is going to be politically
perilous for them come the middle of the spring or summer inching towards
that midterm election, maybe we are not at magical six percent economic
growth as a result of the tax cut bill and the public has really soured on
what has happened to the ObamaCare exchanges, begging Congress to do
something about it. That is really a political risk going into those
elections.

HEMINGWAY: Getting rid of the individual mandate was important because it
was a horrible assault on people's liberty and it was a regressive tax on
the poor. But A.B. is right, the regulations that accompany ObamaCare are
what caused so much trouble for the efficiency and the cost of that
program. And Congress did not handle that this year, and it is something
that they need to deal with. So get ready.

BAIER: We will see. A lot on the table in January, should be packed.